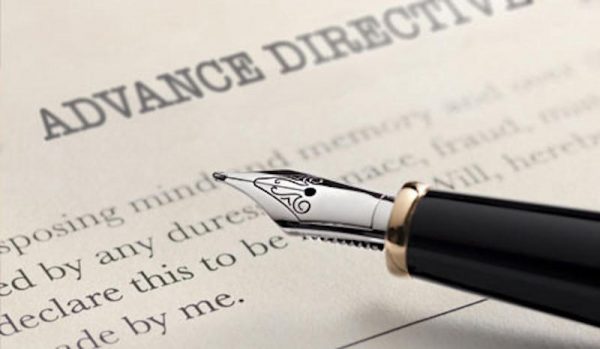 [M]ost Americans are unprepared for the worst to happen—an accident or an unexpected illness that leaves them brain dead, but still alive.  That’s what happened to Terri Schiavo, a young woman who became comatose after suffering a heart attack in 1990.

Schiavo was kept alive by a feeding tube for fifteen years.  During that time, her husband tried to withdraw the feeding tube, but was adamantly opposed by Schiavo’s parents, Congress, and President George W. Bush.  After a highly publicized legal battle, the feeding tube was finally removed and Schiavo died two weeks later.  This protracted battle might have been avoided, if Terri Schiavo had completed a document known as an advance directive.

81-year old Leah Brueggeman wants her intentions made clear, in the event she is unable to express her wishes for medical treatment.  She and her husband live in La Crosse, Wisconsin and they completed their six-page advance directives in 2009 with the help of an attorney.  “We don’t want to be put on feeding tubes indefinitely,” says Leah. “If there’s no chance of recovery—just let us go!”

The advance directive is a legal document that has two parts.  One specifies the kind of medical care a patient wants if he is no longer competent.  For example, CPR if his heart stops, feeding tubes if he can no longer eat on his own, IV fluids for hydration.  Or he can refuse any or all of these interventions.  The patient also designates someone trusted who can make medical decisions on his behalf if he is unable to.

The Schiavo case brought more public attention to the importance of having an advance directive.  But that interest quickly receded.  Today, only a third of all Americans have completed an advance directive. Dr. Ruma Kumar, a palliative care specialist and regional medical director with Kaiser Permanente of Northern California, says that many patients are too afraid to plan for their future health care and their doctors are often reluctant to bring up planning.  According to Kumar, doctors don’t have the time to engage their patients in extended end-of-life conversations.  “Or if you bring up planning, you might make the patient nervous that you’re giving up hope in their treatment plan,” she says.

But even if an advance directive is completed, a patient’s stated wishes may not always be carried out.  The document can get overlooked, misplaced, or ignored by medical staff, as Katy Butler found out.  “Hospitals are a world of their own,” says Butler. “It’s like a foreign subculture.  And once you enter into that system, it can be very, very difficult to get your wishes put into practice.”

Butler is a Bay Area journalist who wrote the best-selling memoir “Knocking on Heaven’s Door:  The Path to a Better Way of Death.”  In her book, Butler described her own difficult experiences, trying to get her father’s advance directive enforced.  She recalls going up against a wall of resistance when his physician refused her request to withdraw treatment for her dying father.

Butler’s father was 79 when he suffered a major stroke in 2002, which caused brain damage and dementia. He had a weak heart and Butler says he probably would have died of natural causes within two years following the stroke.  But his pacemaker kept him alive for the next six years.  In her memoir, Butler says that the extra years of life caused him great misery.  “The tipping point had come,” she writes. “Death would have been a blessing and living was a curse.”

As her father’s designated medical agent, Butler went to his cardiologist and requested that the pacemaker be turned off.  “The doctor not only refused to cooperate—he really treated us as if we were some kind of moral monster,” Butler says. “Technically according to the law, you have the right to refuse any form of medical treatment and you have the right to request the withdrawal of any form of medical treatment.  But you’ve got an advanced device like a pacemaker—you don’t know how to turn it off.  You don’t know where to go to get someone to help you turn it off if your cardiologist is saying no.”

One place Katy Butler might have gone for help was La Crosse, a small city on the Mississippi River in Wisconsin.  La Crosse is known for its steamboats, Wisconsin cheese, and its excellent end-of-life care.  La Crosse is the home of the Gundersen health system, ranked in the top one percent of hospitals nationwide. An astounding 96 percent of all La Crosse residents who died last year had completed advance directives. That figure far exceeds the number of people who complete advance directives in the Bay Area and the rest of the country.

Dr. Bud Hammes, a medical ethicist at Gundersen, led the effort to improve end-of-life care in La Crosse. The key to success, says Hammes, was creating a supportive culture of person-centered care that honors a patient’s goals and values.  “It isn’t just about training a few people to have these conversations with patients,” Hammes says. “It’s actually about changing the culture of the health care system and ultimately of the community.”

To change the culture at Gundersen, Hammes convinced hospital administrators in the late 1980’s that end-of-life care needed to be given higher priority.  An electronic medical record system was created to document patient preferences.  That way, advance directives are easily accessible and can’t get lost.

End-of-life conversations and advance directives are now part of the hospital’s routine practice.  Michael Sigmund is a long-time La Crosse resident and patient at Gundersen.  He explains,“It’s the nurse who asks the question when you first walk in the door.  ‘How are you doing?  You have any pains today?  Do you have an advance directive?’”

Others come to Gundersen to complete their advance directives because of peer pressure from friends and family.  Karen (who did not want her last name used) sought out the assistance of Gundersen facilitator Janet Olmstead for help with her advance directive.  Karen put off this visit for many years, but finally overcame her hesitancy after speaking with a friend.  “I don’t want somebody else stuck with making decisions,” she says. “It’s a burden for them to make decisions that they don’t know what I want.  So I just thought, ‘now is the time.’”

Karen says she doesn’t want heroic measures or life-prolonging treatments if she’s no longer functional. Like Karen, many of Gundersen’s patients want medical treatments stopped if there’s little or no hope of recovery.  Honoring patient preferences has resulted in fewer tests and expensive procedures.  “We are very successful in outcomes in decreasing the costs at the end of life in comparison to lots of other systems,” says Gundersen CEO Dr. Scott Rathgaber, “I can tell you that’s millions of dollars that are left on the table because of our commitment to the patients.”

The Gundersen program was so successful that Hammes took it city-wide.  In the early 1990’s, Gundersen partnered with the other three local hospitals and formed a coalition called “Respecting Choices”.  It brought churches, social service agencies, and nursing homes together and trained their staff to do community education and outreach.  This concerted 25-year campaign has done much to raise public awareness around end-of-life planning and advance directives.

The La Crosse model comes to the Bay Area

Inspired by La Crosse’s success, Kaiser Permanente worked with Gundersen and started its own Life Care Planning program in 2012. Among its goals is to increase the number of patients completing advance directives.  Over 600 physicians, nurses, and social workers have now been trained as facilitators.  Kaiser palliative care specialist Ruma Kumar says much of what Kaiser did was modeled after the Gundersen program.  “We’re hoping to do the same thing over the next eight to 10 years,” she says. “To get greater than 90 percent of our patients with planning done.”

But replicating the Gundersen model throughout the entire Bay Area presents huge challenges.  Bringing together all the hospitals and the hundreds of churches, senior facilities, and social service agencies would be extremely difficult and expensive.  In addition, the Bay Area has a much larger, diverse population with multiple languages and cultures.  Without language-proficient facilitators, outreach to all sectors of the Bay Area would be nearly impossible.

Educational outreach efforts largely depend on volunteers organizations like the East Bay Conversation Project, a community-wide coalition working to help people plan their preferences for care at the end of life.  At a recent gathering in Berkeley, Alison Rodman and two other volunteers talked to a group of seniors on how to complete an advance directive.  She tells them that forms are available on-line.  “It’s a pretty simple document that’s legal and you don’t have to go through great expense by using a lawyer or having it notarized,” Rodman explains.

Don’t wait until it’s too late

La Crosse resident Leah Brueggeman is glad her family didn’t wait.  “And of course, we don’t like to think of death and dying but—it happens,” she says.  Several years ago, Leah’s husband Jim made the decision to stop medical treatment for his ailing mother.  But following her death, Jim had second thoughts.  “I came home and my husband—he was just nearly sobbing.  He was just distraught,” Leah recalls, “He said ‘I killed my mother.’  He said ‘We stopped her medication.’  I said ‘That’s what she wanted.'”

Unbeknownst to Jim, his mother had filled out an advance directive.  Leah went to his mother’s assisted living facility and found a copy of it.  “We got it out.  Her wishes are right here:  no medication blah blah blah,” Leah says. “I took that home and said ‘Honey, take a look at this.  This is what your mother wanted. You’re not killing her.'”

Jim stopped agonizing over his mother’s death, now that he no longer had to guess at what she wanted. Thanks to her advance directive, Jim and Leah were able to avoid the guilt and conflict that had torn apart the family of Terry Schiavo over 20 years ago.