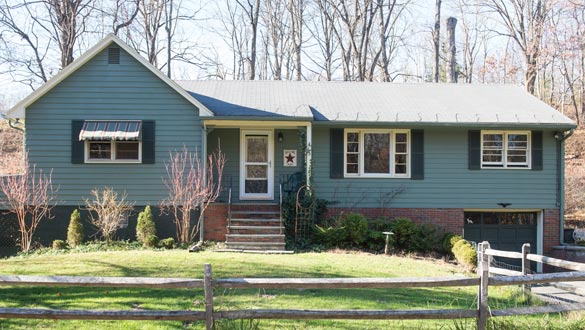 “People close to dying often speak in metaphor and say they are going ‘home.’ Home is no longer a place, but a passage. Death then, becomes the vehicle in which we make safe passage.” These lines come from a dissertation entitled “Dreaming Out Loud: Initiating Plans for a Community-based Home for the Dying,” written by oncology social worker Elise Lark, who has been working to make this dream a reality in the Mid-Hudson Valley.

Lark is the founder of Circle of Friends for the Dying (CFD), a non-profit group that has purchased a Kingston house they plan to convert into a residence available to people needing compassionate care at the end of life. Instead of spending their final weeks or days in the isolating atmosphere of a hospital, the dying will be able to make their transition in the comfort of a home, attended by family, friends, and volunteer caregivers.

“In order to have a good death,” said CFD board member Gai Galitzine, “you need to be living while you’re dying.”

A century ago, observed Lark, who works at the Oncology Support Program at HealthAlliance in Kingston, death was part of everyday life. “People died in community. It was a social, not a medical event. In the 1950s, people started to die more often in the hospital, which is considered the best setting — a sterile environment, safe, convenient to doctors. But we believe people should die in a non-institutional setting, with a sense of everyday life, where they can enjoy the rituals of having meals together, sitting with a group of people, participating in life.”

The hospice movement has made strides in this direction, often bringing patients home from the hospital and providing support and education that allow the family to ease the dying over the divide. But a home death is not always possible. Often the patient needs round-the-clock care, which family members may not be able to provide if they live out-of-state, have to work, or are raising children. Some patients live alone. If home care isn’t an option, the only alternative in Ulster and Dutchess Counties is a nursing home.

The Home for the Dying in Kingston will be run by volunteers who will provide skilled care and companionship for people nearing death. If family members are available, they can spend time with their dying relative in a warm, relaxed atmosphere — at no charge.

Hospice agencies in some areas have established residences or hospital-based hospice units for the dying, but a study done in the Mid-Hudson Valley concluded that a structure dedicated to hospice was not feasible in our area. When Lark was working on her doctorate at Antioch University, she studied options for community-based care. She visited the closest hospice residence to her Kingston job, an eight-bed unit in Newburgh, but found it didn’t fit her vision for a modest, homely setting. Then she discovered the Home for the Dying model, which started with a Home in Rochester in 1984, organized by lay Carmelites. There are now 25 of these Homes in New York State. It turns out that a facility with more than two beds is considered an institution, subject to rules and regulations. The Home in Kingston will stick to two beds, so they’ll be free to provide the most appropriate care.

Community-based end-of-life care is a boon to volunteers as well as to the dying and their families. “I had deaths in my family where I wasn’t able to be there, and it stayed with me,” said Galitzine. “I had a good experience with my mother where I was able to get to her in time even though she’d had a stroke. The reassurance she felt when I was there was one of the most beautiful things. I could see it in her eyes, although she couldn’t speak. I love the idea of being able to help other people in that situation.”

“Death is not an emergency,” Lark pointed out. “It happens every day. It’s as normal as birth. Some people won’t like this idea, but I see death as a sacred rite of passage. To be present to that is an amazing experience, a gift.”

One study shows that 80 to 90 percent of Americans say they prefer to die at home — but only 25 percent actually get to do it. Hospice is offered when patients are told they have six months left to live, but most people only take advantage of hospice services for the last few days of life, when life support measures are abandoned, and palliative care takes over, doing everything possible to relieve pain and make the patient comfortable. Hospice shifts the focus from preserving life at all costs to enhancing quality of life. But the reluctance of doctors and family members to address the prospect of death is an impediment to getting end-of-life care in a timely manner.

“Medical culture operates on a culture of hope,” said Lark. “You can’t hold hope in one hand and the fact that people are nearing the end of life in the other hand. Doctors are not trained to have end-of-life discussions. People get on hospice late, so they don’t get to reap the benefits of hospice, which provides support to the caregiver. Unless we can have these conversations with our loved ones, we’ll keep prolonging the dying process.”

CFD has joined the international Death Café movement, organizing monthly informal gatherings in which people sit in small groups to talk about the subject most of us tend to avoid — how our lives will end. Death Cafés in the Woodstock area are run by psychotherapist Laurie Schwartz and social worker Barbara Sarah, founder of the Oncology Support Program at HealthAlliance. For people who are fearing death, grieving for relatives, or wondering about the mystery of end-of-life passage, the conversations provide a forum for sharing often unspoken thoughts and worries. The underlying purpose, said Galitzine, “is to create a culture where death is part of everyday life, to bring the act of dying back into people’s lives, so they won’t fear it and will talk about it.”

The Home for the Dying in Kingston will be available to people with three months or less to live. In addition to two bedrooms for patients, equipped with hospital beds for comfort, there will be a wing with quarters for family members who wish to stay overnight. Meals can be prepared in a full eat-in kitchen. A wraparound deck and garden will be accessible by wheelchair from the client bedrooms, which will have sliding doors to the outside.

Presently CFD volunteers are cleaning and refurbishing the house to rent it out for a year while the organization raises money for renovations. A capital campaign will begin in the spring, with plans to have the home in operation in 2017.

“There will be no white uniforms,” said Lark. “No one is confined to their room. They can use the whole house as if it were their own house. A good place to die is also a good place to live.”