More pregnant women died, experienced complications or delivered stillborn babies during the pandemic than in previous years, according to an analysis of 40 studies in 17 countries published on Wednesday in the journal Lancet Global Health.

Pregnant women face a heightened risk of severe illness and death if infected with the coronavirus. But the researchers, in Turkey and the United Kingdom, wanted to assess collateral damage from the pandemic on pregnancy and delivery, and so excluded from their analysis those studies that focused only on pregnant women who were infected.

Reviewing data on more than six million pregnancies, the investigators found evidence that disruptions to health care systems and patients’ fear of becoming infected at clinics may have led to avoidable deaths of mothers and babies, especially in low- and middle-income countries.

Data from a dozen studies showed that the chances of a stillbirth increased by 28 percent. And the risk of women dying while pregnant or during childbirth increased by more than a third in two countries: Mexico and India. A subset of studies that assessed mental health showed that postpartum depression and anxiety were also heightened during the pandemic.

Nearly six times as many women needed surgery for ectopic pregnancies — in which a fertilized egg grows outside the uterus — during the pandemic than before. Ectopic pregnancies can be treated with medications if detected early, so the results suggest that the surgeries may have resulted from delays in care.

The analysis did not find differences in other conditions associated with pregnancy, like gestational diabetes or high blood pressure, or in the rates of cesarean sections or induced labor.

The drop may be a result of changes in health care delivery and in pregnant women’s behavior during the pandemic, the researchers said, indicating that the pandemic has exacerbated disparities between low- and high-income countries.

I had a miscarriage this summer — and it broke me in more ways than I could have imagined. At my nine-week appointment, I discovered, to my complete surprise, that I was experiencing a “missed abortion” – a pregnancy loss in which I’d had no miscarriage symptoms whatsoever. Not only did I have to make medical decisions while in shock, but I also struggled intensely to make sense of what I was feeling emotionally and spiritually.

With help, I recognized that I was deep in the throes of grief. Jewish tradition provides an incredible structure for mourners to grieve the death of a loved one. Yet nothing is prescribed for my miscarriage grief. When grieving, it can be harder to make any decision, large or small. I craved a prescription for what to do; that might have left me with fewer heart-wrenching decisions.

Nonetheless, I found healing and comfort in adapting Jewish rituals and traditions.

In honor of October being Pregnancy and Infant Loss Awareness Month, here are some of the lessons I learned:

Grieving my pregnancy loss was incredibly challenging. And yet, a foundation in traditional Jewish mourning rituals eventually helped me find ways to adapt them that felt honest and appropriate for miscarriage. As I moved through each day, I also found myself experiencing deep, profound gratitude for the people in my life who showed up for me over and over again.

May we find ways to cushion the pain of pregnancy losses with community, ritual, and tradition.

Though your body might be ready to return to sex after a miscarriage, are you? 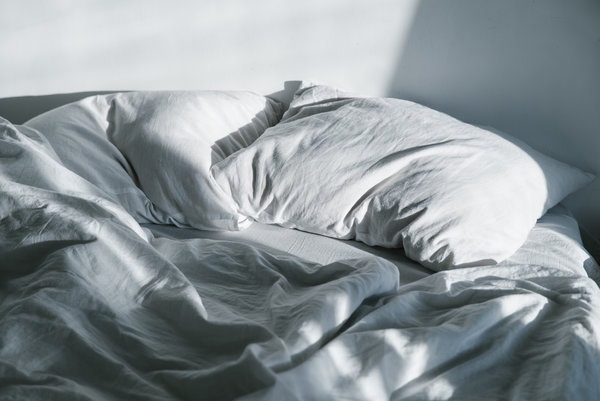 How soon can you have sex after experiencing a pregnancy loss? It’s a common question among women of childbearing age, considering that up to 20 percent of pregnancies result in miscarriage and approximately 1 in 100 in stillbirth. There’s not a standard — or straightforward — answer. Generally, physicians counsel patients to wait until they feel ready. But readiness for a woman and her partner can depend on a number of physical, and emotional, factors.

“From a medical and practical perspective, the primary thing is to ensure that the pregnancy has passed completely, the cervix has closed, and that there isn’t an increased risk of causing infection in the uterus,” explained Zev Williams, M.D., Ph.D., chief of the division of reproductive endocrinology and infertility and an associate professor of obstetrics and gynecology at Columbia University Irving Medical Center. “The timing for this depends on how far along the pregnancy was at the time of the loss and how quickly the woman’s body recovers.”

A couple’s romantic readiness is another question altogether.

Emotional roadblocks are a big factor: Women may feel reluctant to engage in sexual intimacy while still grieving their loss. Miscarriage can also change a woman’s relationship with her body, and what sex represents to a couple might shift. If this seems hard to understand, it is: I am a psychologist specializing in women’s reproductive and maternal mental health, and I didn’t fully comprehend how complex returning to sex could be until I experienced a second trimester miscarriage firsthand. Then I understood all too well: There’s no one-size-fits-all answer.

“There are no guidelines with regard to telling patients what to expect about returning to sex after miscarriage. Routinely, we don’t discuss sex after loss unless patients bring it up,” said Jessica Schneider, M.D., an ob-gyn at Cedars Sinai Medical Center in Los Angeles. “There’s research about how safe it is to get pregnant again after a loss, but not about sexual function or satisfaction.” And the fact is, sexual function and satisfaction can, and do, change.

I talked to several women about their experiences around sex after pregnancy loss to find out how they approached returning to intimacy. (The women preferred their last names not be used due to privacy concerns.)

Some women, like Ash, 36, felt ready to have sex right away. After experiencing a stillbirth, she turned to sex for healing. “It was a way to feel powerful in my body,” she said. “I felt like my body had failed me, and sex was a way to get that back.” There was one caveat though: She didn’t want to risk another pregnancy. “It felt better to engage in sexual acts that couldn’t result in one.”

Trying to get pregnant again is a sensitive topic medically and emotionally. The World Health Organization’s official stance is to wait six months before attempting another pregnancy. Recent research, however, suggests that having sex sooner doesn’t have a negative effect on future pregnancies and could actually help success rates.

Shame and self-blame can enter the bedroom after pregnancy loss and create trouble where there previously was none. Hanan, 27, thought she was ready to have sex again immediately after a stillbirth, though her doctor told her to wait six weeks. She said she felt arousal and the desire to have sex, and engaged with her husband in everything other than penetrative sex, while waiting for medical clearance. But the first time they had intercourse, she wasn’t prepared for her emotional reaction. “I cried so much after the first time. I felt very guilty,” she said. “My body wanted to, but my brain didn’t. It felt selfish and immoral — like I should have been celibate while grieving.”

These thoughts are especially challenging for women who are actively trying to conceive again. “I did not want to initiate sex after my loss, but at the same time, I did want to get pregnant again,” said Maggie, 32. “My vagina became a constant reminder of the loss.”

Some women said they resented their bodies for a perceived failure. “After my miscarriage, I couldn’t be with anyone for over a year,” Zachi, 27, told me. “The fact that my body failed impacted the way I felt sexually afterward. I carried the baby emotionally, long after physically.”

While a 2015 survey found that 47 percent of respondents who had experienced a miscarriage reported feeling guilty about it — and nearly three-quarters thought their actions may have caused it — the reality is that chromosomal abnormalities are the explanation in about 60 percent of miscarriages. Pregnancy loss cannot be prevented.

If you’ve been trying to conceive for a long time, sex following a pregnancy loss can become especially fraught — even unappealing.

“After my first miscarriage, we only had sex to conceive. It started to feel like a task,” said Gina, 30, who has experienced infant loss and two miscarriages. “That mentality compounded after my second miscarriage and killed all sexual desire for me.”

Sonali, 33, who has lost four pregnancies, had difficulty returning to the very place she got pregnant. “Sex with your other half in the bed where you conceived the babies you lost is so triggering,” she said.

“Sometimes, I’m thinking about where I’d be in my pregnancy now; how I wouldn’t be able to have sex in this position,” Maria said. “It makes me feel guilty to feel great, when I should be seven months pregnant and uncomfortable.”

Pregnancy loss can have unintended positive impacts on a woman’s sexuality, too. Zachi said that she is more assertive in her sex life because of her miscarriage. “I have to listen to my body now,” she said. “It becomes painful not to. I am a lot more sure in what I want.” A miscarriage ultimately brought Maggie and her husband closer together, she said. “During the loss, I felt like I was on an island,” she remembered. “The first time my husband and I had penetrative sex, I cried from relief, because I felt so re-connected to him.”

Having and enjoying sex again is really about one thing — personal readiness — which is what I tell my patients. It’s O.K. to feel grief and sexual desire simultaneously. “Moving on” is not a prerequisite for pleasure.