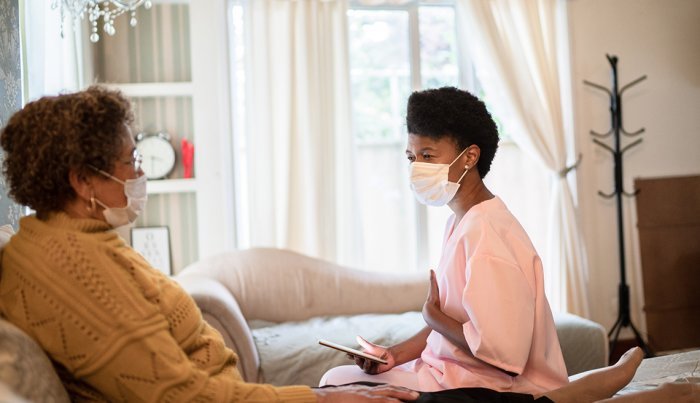 Most Americans say they’d prefer to die at home, and indeed rates of home deaths are on the rise — a trend that may be fueled by the coronavirus pandemic and decreasing nursing home occupancy rates.

But having someone help navigate that end-of-life experience can be essential. Sometimes called a death coach or a death midwife, death doulas act as advocates for the dying, guiding everything from logistical preparations, such as advance care planning and funerals, to incorporating cultural and religious beliefs into final rituals.

“It’s kind of like being an event planner, but for death,” says Virginia Chang, a certified end-of-life doula in New York City.

COVID-19 has forced death doulas to adapt to pandemic restrictions and to new client needs. Those in private practice have had to offer more support over the phone and via Zoom, Chang says. At the same time, given a shortage of home care services, doulas have found themselves providing increased emotional support to caregivers, who may feel isolated or overburdened.

Virtual visits were an adjustment for Chang, who provides services through her business, Till the Last. “I do miss the intimate connection established between myself and the dying person through quiet conversation, presence and touch,” she says. “However, I have always said that empowering the caregivers to better care for their dying loved one meets my goal of better care for the dying person. So, I’m still doing my job.”

Chang has also noticed that patients and family members are getting in touch earlier than usual. Instead of being summoned weeks, or even days, before death, she is being contacted months, and sometimes years, before an anticipated death.

Home has surpassed the hospital as the most common place of death in the United States for the first time since the early 20th century, according to a New England Journal of Medicine study published in 2019 (months before COVID-19 hit the U.S., which means that the number of home deaths is likely higher now).

Studies have shown that approximately 80 percent of Americans would prefer to die at home if possible, according to the Stanford School of Medicine. That figure may be higher now, after the pandemic focused people’s attention on death and dying, but COVID-19 has certainly amplified interest in the role of death doulas, says Henry Fersko-Weiss, 73, a licensed clinical social worker who, in 2003, created the first formal end-of-life doula program in the U.S., at a New York City hospice, and cofounded the International End of Life Doula Association.

“The recognition that death can be done differently is increasing because there’s been so much talk about death and dying,” he observes.

Though the work that death doulas do has probably gone on for thousands of years and been called different things, Fersko-Weiss says, the death doula movement gained steam two decades ago, offering meaningful services to those who felt limited by a traditional medical system.

“End of life needs more than crisis intervention,” he says. “This is a missing piece during a very demanding time in people’s lives.”

Fersko-Weiss cautions that people who are interested in working with a doula should know that no industry standards currently exist and that a certification by one organization doesn’t hold the same value as a certification by another.

Chang, for example, learned about end-of-life doulas after attending a talk that Fersko-Weiss gave. She has since been trained by the International End of Life Doula Association, the University of Vermont End-of-Life Doula Professional Certificate Program and the Visiting Nurse Service of New York.

Doulas support the dying, but they also provide services to those left behind.

Arlene Stepputat, 67, volunteers as a project manager for the nonprofit National Hospice and Palliative Care Organization’s End-of-Life Doula Advisory Council. The council’s Doula Grief Project, which offers free and confidential grief support services to those dealing with loss, grew out of the COVID-19 restrictions and the fact that most doulas couldn’t work in person with clients and families.

People who are considering the services of a death doula should ask plenty of questions, advises Stepputat, owner of Dying in Grace. “Interview that person like you would any other person you’d be making a contract with,” she says.

Some questions to ask a death doula are:

Stepputat, who lives in Santa Barbara, California, was drawn to this occupation because of multiple losses: Four days before her 12th birthday, her father died in an accident; when Stepputat was 19, her girlfriend was murdered; and several street youths she worked with as a young adult died from suicide and other causes.

And the benefits of a doula-patient relationship go both ways, according to Terry Bonebrake, 58, of Grand Rapids, Michigan, a death doula who says she reaps rewards from her work.

“Anytime you do service work, your focus is on the other person, and yet you learn things you might not ever have known otherwise,” she notes. “What’s probably affected me the most is seeing how much every moment counts. This 60 minutes and the next 60 minutes will never be the same again.”

What do death doulas do?

Doulas “inform, support and guide, rather than advise or do,” explains Merilynne Rush, who offers end-of-life doula training, mentoring and certification through her consultancy, The Dying Year. Rush says end-of-life doulas can: