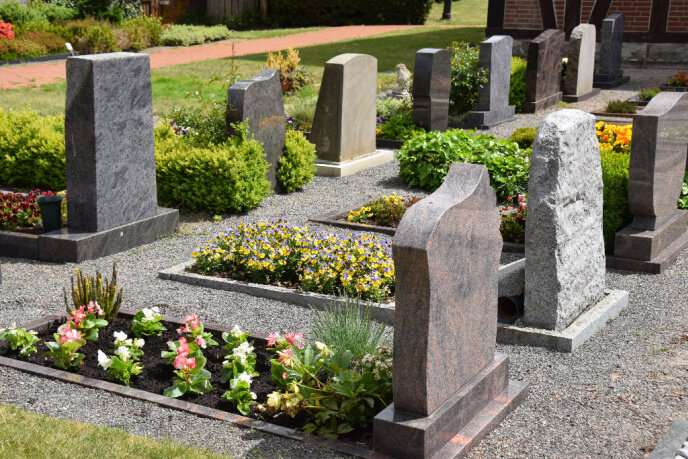 As grave markers, tombstones offer a focus for mourning and commemoration. Typically made of stone and usually engraved with the deceased’s name, date of birth and death, they also often carry inscribed tributes. They’ve been around a long time, across a wide variety of cultures.

“Numerous Neolithic stone statues called stelae, associated with Kurgan culture burials about 5,000 years old, were found in Ukraine and Moldova,” reveals Čaval. “We also have Bronze Age stone and wooden markers on mounds. The Greeks buried commoners and elites in marked graves. There’s the pre-Roman Vulci in Italy, followed by the abundant Roman tombstones, with statues, reliefs and inscriptions telling stories,” she adds.

Why deaths are written in stone

As Čaval explains, the first epitaphs as we now know them, especially the formula “Here lies…”, comes from the Greek tradition. Adopted by the Romans, thanks to the spread and influence of their empire, this became the standard in the West.

More than just words, the aesthetics of tombstones also tell us about the beliefs of their creators. “The specifics tell us something unique about the times in which they are made—about communities, their identity, values and beliefs, about both life and the afterlife,” says Čaval.

Most obviously, a tomb’s location can reflect the deceased’s personal attachment to a specific location, while craftmanship and materials can reflect social status, especially if rare. Inscriptions are indications of literacy, while decorative motifs can suggest religious affiliations.

“Even without decoration or inscription, the tombstone’s shape, position within a cemetery, type of cemetery, all help build a picture of what a society values and how individuals fit into these values,” adds Čaval.

Čaval’s expertise and interest in understanding the past through burial practices and their material culture, were sparked by the Western Balkans’ little known stećci, gigantic stone monuments found at gravesites.

Decreed a UNESCO World Heritage Site in 2016, the stećci are medieval tombstones, preserved across the landscapes of Bosnia and Herzegovina, Croatia, Montenegro and Serbia.

“Remarkably, these are not attributed to any ethnic or religious group and so have always been considered enigmatic. But their numbers, with over 70,000 preserved, alongside their monolithic character reflect their importance, many centuries ago,” says Čaval.

Some tombstones have inscriptions written in Glagolitic and Bosnian Cyrillic scripts, both extinct today. This speaks to local ethnic and religious diversity, substantiated by prehistory decorations mingling with Roman Christian or Islamic elements.

Are the cracks showing in tombstones?

The simplest reason for tombstones’ success is that they are fit for purpose. Suitable stone has been relatively easy to find and transport to gravesites. It can be decorated. Stone is hard-wearing, enduring extreme weather and the passage of time—ensuring a lasting tribute. Which also explains why other grave markers, whatever they might have been, are lost to time.

With the rise of humanist funerals and with cemeteries facing overcrowding, accompanied with increasing sustainability concerns—are tombstones falling out of favor? “There is definitely a trend for alternatives but I think there will always be a place for tombstones. Their reassuring solidity literally represents a life, keeping it present and so relevant,” concludes Čaval.