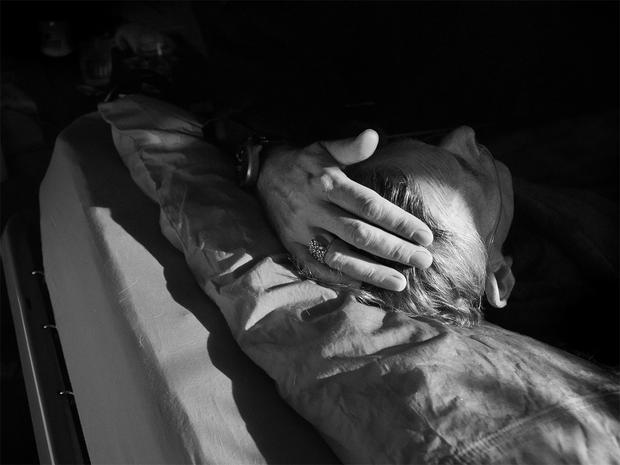 When Beth Wood’s cancer returned in 2014 after 20 years of remission, she made an instant choice: no chemotherapy, radiation, or other life-altering treatments that could only stave off the inevitable.She told her husband so much in the same breath as informing him the cancer was back, after what was supposed to be a routine visit to the doctor.

“She made a decision to say, ‘I’m not going back through that again. I want quality of life, not quantity,’ ” says her husband, David Wood, of Tennessee. “And we were given almost 3 more years.”

They traveled the country, spent a final Christmas with the children and grandchildren, and when she died at the age of 65 on Dec. 29, 2016, it was peaceful, at home, with Beth secure in her faith she was going to a better place. It was, says her widower, a “good death.”

“I thought a lot about those two words. I think to understand death, you have to understand the life of the person. For her, she was not scared of death,” he says.

It’s a concept more Americans, from the elderly to the terminally ill to the doctors who care for them, are embracing. Eight states have passed laws allowing doctor-assisted suicide, although a judge recently overturned California’s 3-year-old law. Conversations about death, once taboo, are now held around the world at so-called Death Cafes. Before former first lady Barbara Bush died in April, she received support on social media when she decided to forgo further medical treatments.

After all, at no point in history have people lived as well as Americans today. So, more people are asking: Why shouldn’t we focus on the quality of our death as well?

By the end, Kathy Myers couldn’t even get out of bed on her own. A lifelong smoker in Aurora, CO, she had chronic obstructive pulmonary disease.

There were no more bike rides with her husband, no more trips to the mountains, no more working in her garden, no more doing anything without an oxygen tank. So when Colorado voters approved doctor-assisted suicide in 2016, she was determined to use it. But because of misunderstandings or a reluctance to act under the new law, they had a hard time finding a doctor willing to act on it.

“What I came up against was a lot of ignorance. Our family doctor said it was going to take court orders and years before we could opt for that,” says her husband, Herb Myers.

After the couple pleaded for help through local media, a doctor got in touch and made a house call, agreeing that Kathy met the criteria under the new law: a prognosis of less than 6 months to live and sound mental capacity. A second doctor confirmed, as required by the law, and on March 12, 2017, Herb emptied 100 capsules of Seconal into a glass of Gatorade.

They held hands as she drifted into unconsciousness. A short time later, a hospice nurse confirmed she had no vital signs. It was, Herb said, “very gentle and very quick.” She would’ve been 63 the next day.

In the first year of Colorado’s law, 69 people were prescribed aid-in-dying drugs by 37 different doctors, and 78% of them were able to die at home, according to the Colorado Department of Public Health and Environment.

Nationwide, the movement has come a long way since Jack Kevorkian was sent to prison in 1999 for assisting in patient suicides. Oregon in 1994 became the first state to pass an aid-in-dying law, which has been used more than 1,000 times. In that state, Catholic groups and other conservatives remain opposed, although they are not actively fighting the law.

Sam DeWitt is the Colorado access campaign member for Compassion and Choices, a Denver-based nonprofit that advocates for such legislation around the country. The organization and its staff and volunteers have worked to educate doctors about the new law. They find the most opposition in rural areas and at medical facilities with religious affiliations or out-of-state ownership. Medical facilities can opt out of the law, prohibiting their pharmacies from filling such prescriptions or such deaths occurring on the premises, but they can’t forbid doctors from taking part.

After Kathy Myers’ story made headlines, Herb Myers’ phone rang constantly with people asking for help finding a doctor. Those calls don’t come anymore as the process in Colorado has gained more acceptance. And while he misses his wife of 38 years, he has no regrets.

“Anything else we did would have just prolonged her life and her suffering. I think it was the right thing to do,” he says. “I think everybody should have the right to go the way they want.”

Sarah Farr is an end-of-life doula in the Washington, D.C., area. While doulas are better known for providing help for births, Farr hosts regular meetings known as “Death Cafes” for people to discuss this once taboo topic. Other end-of-life doulas work one-on-one with people who are dying, helping them memorialize their lives and plan their deaths.

“I think in America, we live in a very youth-centered culture, a very kind of anti-aging culture. There’s a lot of denial of death. We don’t usually see people die in our homes anymore,” Farr says. Becoming and end-of-life doula has become popular, with 18 training sessions being held around the country in 2018 alone, according to the International End of Life Doula Association.

According to Deathcafe.com, on any given day there could be half a dozen such meetings around the country. Farr put out chairs for 15 at the last gathering she hosted; 50 people showed up. Discussions run the gamut of death-related concepts, and attendees range from young people to the elderly. Most have experienced a death, and Farr sees them looking for some control over what is essentially uncontrollable: their own deaths.

“A lot of people want to maybe share stories of a death they witnessed. People say, ‘If I could have a say in it, this is how I’d want to die,’ ” she says.

“Choosing [the] day and time of our deaths; it’s just something we don’t have control over. But that doesn’t mean we can’t plan for it if it was to happen, in terms of using hospice care, dying in a hospital versus dying at home, exploring different things you can do with your body after you die, discussing home funerals.”

Of course, a “good death” could be something different for each person. Emily Meier, PhD, a clinical psychologist at UC San Diego Health, recently studied research from around the world on death and identified 11 core themes for a good death. Among these were a lack of pain, religious and emotional well-being, a feeling of life completion, dignity, closeness of family, and quality of life. Being able to die at home is also a strong desire.

Meier said a “good death” is different for each person, but talking about it in advance is the best way to make it happen. No matter the age, she encourages people to prepare advance directives, wills, and other end-of-life documents and share their wishes with loved ones.

“If the conversations are ongoing, and even when you’re healthy, if you have conversations about, ‘What’s most important to me at this point in my life?’ a lot of those things are going to stay the same at the end of life,” Meier says. “The more we talk about it earlier, the less scary it becomes because it’s very challenging to have those conversations in the last moments and trying to scramble together to make sure people are having, so to speak, a good death.”

Most people think of hospice as a place people go to die. At Alive Hospice in Nashville, it’s where they go to live as well as possible until they die.

Chief medical officer Robert Berkompas, MD, said the nonprofit hospice has only 55 beds but treats 4,000 patients a year with a prognosis of 6 months or less to live. Most of the care is done at home by a team of nurses, doctors, counselors, and others who work in a variety of health care fields.

“We actually ask them: What are their expectations? What are their desires? It’s fairly common they don’t want to suffer physically, with pain and nausea and swelling, so we address all that,” Berkompas says.

But what if they only want to stay alive long enough for an upcoming wedding? What if their treatment plan has side effects that make their final days unbearable?

“We let the patient direct as much of their perception of what a good death would be and work with that,” he says. “If we can give them a great deal of control within the hospice environment, I hope we’re giving them the best of both worlds.”

As a doctor trained to always fight illness, it required a change of philosophy. Berkompas works with other doctors to help them get away from the treat-at-all-costs approach.

“When we say, ‘I really don’t have any more treatment for that illness that is effective or promising,’ I can say, ‘But I still have a treatment for you.’ It’s going to be helping you through this process of dying, and hopefully it will be a good death and not spending your final days in an ICU or a hospital.”

For David Wood, whose wife declined aggressive treatment for her terminal cancer, Alive Hospice made all the difference in making her final months bearable. Nurses visited the home every other week, giving her medication to deal with the pain. And when she couldn’t get out of bed on her own, a nurse came. If he had questions at 2 a.m., he called and someone from the hospice answered. It gave him the confidence to keep her in the house and be her caregiver until the end.

It was the most intimate time in their 43 years of marriage.

“She wanted me to live again, to love again, to play again,” said David, who has since remarried.

“She was comfortable. She told me, ‘David, I am not scared about where I’m going because I know who I’m going to.’ ”

“Hospice just gave me and her the confidence to have a good death. To me, it’s to make the transition from this world to the next.”