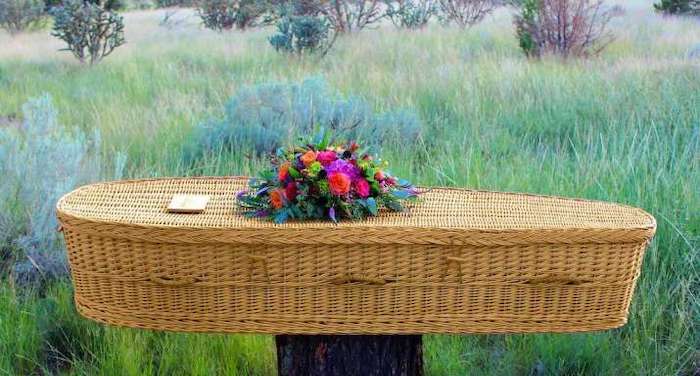 Death is our universal condition, and every culture has ways to deal with bereavement and loved ones’ remains. While these rites vary greatly, it is becoming apparent that many of the world’s traditional burial practices are unsustainable in the face of overpopulation and climate change. All the funerals I have attended have their roots in Christianity, and require that the deceased either be cremated, or buried in a coffin and vault. In America alone, it is estimated that every year traditional burials result in the deposit of: “20 million feet of wood, 4.3 million gallons of embalming fluids, 1.6 million tons of reinforced concrete, 17,000 tons of copper and bronze, and 64,500 tons of steel being.” (The New York Times)

It naturally follows that the toxins and heavy-duty materials used to embalm, preserve and contain bodies has a detrimental effect on the environment. While cremation was thought to be an ecologically sound alternative, the procedure actually causes high levels of carbon dioxide to be released into the atmosphere. In light of the somber findings of the UN Intergovernmental Panel on Climate Change’s (IPCC) report on climate change, it is clear that drastic steps are needed to prevent the environmental collapse. It is not only what we do during our lifetime that can affect change: innovative eco-burials are proving that we can reduce our carbon footprint even in death.

Funeral rituals vary greatly across the globe, from the New Orleans’ Jazz Funeral, which blends West African, French, and African-American traditions, to the Turning of the Bones in Madagascar, where relatives commemorate the diseased by dancing with their bodies. My personal favorite is the sky burial, a tradition that is prevalent in Tibet, amongst other cultures, and which involves depositing bodies at high elevations so that they may be consumed by vultures. Having attended only a handful of funerals in my lifetime—all of which were in Western cultures and did not include an open casket—the notion of seeing a dead body is completely foreign to me, not to mention the inevitable scavenging that follows a sky burial.

However gruesome the ritual may appear to the outsider, it stems from real environmental and spiritual practicalities. Indeed, in many parts of Tibet and Qinghai, a lack of timber and fuel made cremation impossible, just as the sturdy and rocky grounds prevented earth burials. Furthermore, the ritual is considered to be an act of charity on the part of the deceased, who makes a final offering to other sentient beings.

The notions of compassion and impermanence are essential to Vajrayana Buddhism, and sky burials are a reflection of these virtues. In fact, charnel grounds are also cited in the Early Buddhist canon; in the Satipatthana Sutta, the Buddha encourages his followers to reflect on impermanence by observing dead bodies undergo various stages of decomposition. Unfortunately, with the number of vultures diminishing every year, sky burials are becoming somewhat of a rarity.

With overpopulation rising, funeral practices around the world are facing similar difficulties. In Korea, for example, the lack of burial space has forced many families to dig up the remains of their ancestors and have them cremated. Add to this the imminent threat of climate change, and it is no wonder that funeral practices around the world have to adapt.

Fortunately, a number of people and organizations are coming up with innovative solutions to this problem. There are now several companies in Korea who specialize in transforming people’s cremated remains into colorful beads (this provides an alternative to the urn, which can appear eerie to some). Others have opted to have their remains turned into reef balls that are then placed in the ocean, creating a natural habitat for marine life.

For those who want to bypass cremation because of its negative effects on the atmosphere, there are now a number of green alternatives that promote the natural decomposition of bodies: allowing remains to seep directly into the earth and provide sustenance for the surrounding flora and fauna.

In order to be environmentally friendly, biodegradable materials are used to make cloths, shrouds and caskets; and artificial markers such as tombstones are replaced by naturally occurring flora, or a GPS system. According to the non-profit organization The Green Burial Council, going green also has its financial benefits, since eco-burials can significantly lower the cost of posthumous arrangements. For example, prices for a complete natural burial at Honey Creek Woodlands (Georgia) start at US$3,400 —approximately half the cost of a typical modern funeral.

For better or for worse, concerns over the future of our planet are forcing us to make changes to age-old traditions. It is perhaps for this reason that the Catholic Church, and many funeral industries, have embraced eco-burials; and in 2015, the Funeral and Memorial Information Council found that 64 percent of adults aged 40 and up would consider having a green burial. Linda Holzbaur, a member of the Greensprings Natural Cemetery board, explains that when she buried her two family members, everyone “chipped in” with digging the grave, making it a very personal experience for all involved. Artist Jae Rhim Lee, who devised a burial suit made of flesh-eating mushrooms, encourages the West to face death head on and address “the actual process and acceptance of decomposition.” (TedBlog)

In this way, natural burials not only help to protect our planet; they also provide us with an opportunity to rethink death and to incorporate lessons of compassion, interconnectedness, and impermanence into our rituals.