The Pope strongly condemns the ‘right to die’ movement, and warns against abortion, IVF and stem cell research

(I would have felt better about this had he not conflated suicide, euthanasia and assisted dying.)

By Nick Squires
Pope Francis denounced the right to die movement on Saturday, saying that euthanasia is a sin against God and creation. 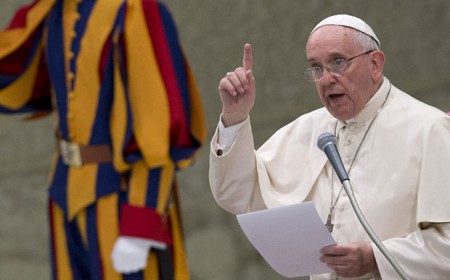 The Latin American pontiff said it was a “false sense of compassion” to consider euthanasia as an act of dignity.

Earlier this month, the Vatican’s top bioethics official condemned as “reprehensible” the death by assisted suicide of a 29-year-old American woman, Brittany Maynard, who was suffering terminal brain cancer and said she wanted to die with dignity.

“This woman (took her own life) thinking she would die with dignity, but this is the error,” said Monsignor Ignacio Carrasco de Paula, the head of the Pontifical Academy for Life.

“Suicide is … a bad thing because it is saying no to life and to everything it means with respect to our mission in the world and towards those around us,” he said, describing assisted suicide as “an absurdity”.

Ms Maynard took a lethal prescription provided by a doctor in Oregon under the state’s death-with-dignity law. She died on Nov 1 after leaving her family and friends a last message. She had been diagnosed with an inoperable brain tumour earlier this year.

The Pope did not refer to the Maynard case specifically in his remarks, which were made to the Association of Italian Catholic Doctors.

The Pope also condemned in vitro fertilization, describing it as “the scientific production of a child” and embryonic stem cell research, which he said amounted to “using human beings as laboratory experiments to presumably save others.”

“This is playing with life,” he said. “Beware, because this is a sin against the creator, against God the creator.”

The Pope considers the assisted suicide movement as a symptom of a contemporary “throw-away culture” that views the sick and elderly as a drain on society.

Francis urged doctors to take “courageous and against-the-grain” decisions to uphold church teaching on the dignity of life.

2 Replies to “Pope Francis denounces euthanasia as ‘sin against God’”