“The Green Reaper” talks about her latest book 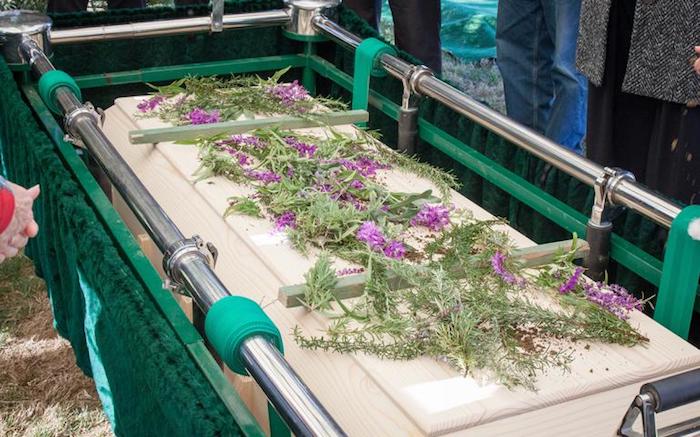 You’re probably aware that your carbon footprint doesn’t end when you do, but did you know that we could build a new Golden Gate Bridge every year using the metals that leach into the ground from traditional caskets? Take into account all the concrete we bury and we could construct a new two-lane highway beneath it. Factor in the annual carbon emissions that result from cremation and you could drive to the moon and back. This all is according to Elizabeth Fournier, the one-woman operation behind Boring, Oregon’s Cornerstone Funeral Services. It’s located in a rehabbed goat farm and is also the first green funeral home in the Portland metropolitan area. Fournier, in fact, is more commonly known as the “Green Reaper.”

After all, she’s long been helping Oregonians bury their loved ones in ways that involve no metal caskets, concrete linings, or carcinogenic embalming fluids (the noxious chemicals that are released into the earth when the casket eventually biodegrades and the body decomposes). This often means lowering unembalmed bodies into their own backyards in Green Burial Council–certified biodegradable cedar caskets, or even no caskets at all. Fournier (pictured, right), an upbeat and big-hearted mortician who’s prone to statements like “All Grandma’s juicy goodness will go back into the permaculture of the land,” says her nickname was coined by a neighbor who saw her standing in yet another yard with a shovel, excavating a new plot. “It’s a lighthearted way of saying, ‘Yes, you’re the death lady, but you’re the eco death lady.’”

When the Green Reaper was eight, her mother and grandparents died. Not only did young Fournier spend a lot of time in funeral homes, but she also found herself drawn to the tranquility of cemeteries, and even kept a mock graveyard on her dresser. She also devoured National Geographic stories about various cultures’ death rituals and performed funerals for her friends’ pets. Fournier, who soon after going into the funeral industry observed that its progression has aligned with the regression of the planet, wrote about her passion for green death in 2017’s The Green Reaper: Memoirs of an Eco-Mortician. Following its release, she received countless calls and emails from readers who wanted to extend their environmentalism into their after-lives but weren’t sure how to legally go about not turning into toxic waste. “I got a lot of people asking, Can you just put all this information in one place?” Fournier says.

Similar to how Caitlin Doughty of “Ask a Mortician” fame has cracked open the secrets of the funeral industry in hopes of boosting western cultures’ acceptance of death and grieving, Fournier wrote The Green Burial Guidebook: Everything You Need to Plan an Affordable, Environmentally Friendly Burial (the paperback version of which came out in May from New World Library) as a resource to catalog all the natural burial choices available in North America, and to empower readers to make more environmentally friendly final choices—which also, she says, tend to be more cost-effective and psychologically satisfying. A true memoirist, Fournier draws on many of her own experiences to guide readers through everything from green burial planning and funeral basics to sea burials and body-composting options. And The Green Burial Guidebook exudes warmth and compassion—readers who are grieving or faced with their own mortality will likely find comfort in its pages.

After devouring The Green Burial Guidebook in one sitting, Sierra called up the Green Reaper to  discuss climate-conscious changes within the funeral industry and greener ways to go about dying. 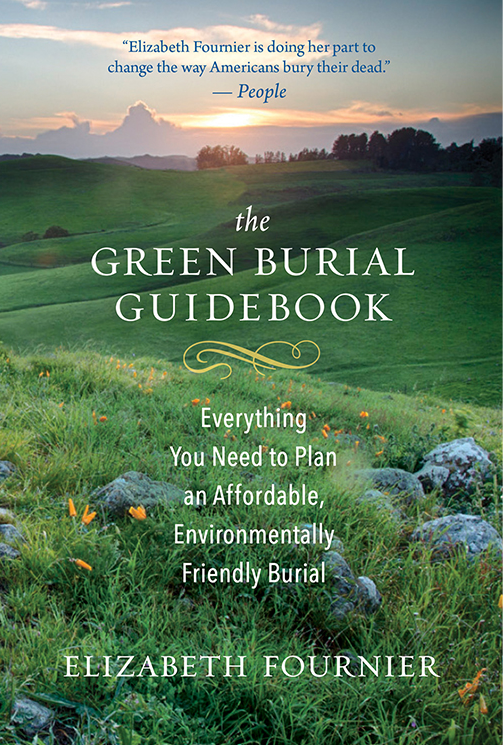 Sierra: Who did you write this book for?

Elizabeth Fournier: My intended audience was people who’ve never heard of natural burial and want to know what the heck is going on, as well as people who keep hearing about it and think it’s a trend. I wanted to clarify that up until 150 years ago, in fact, most burials were inherently green—when someone died they were bathed, prepared, and placed in a wooden box. This changed dramatically during the Civil War. Suddenly, bodies had to be transported over long distances in large quantities, and so we started embalming to preserve them, which became common practice. Now, we have a very eco-conscious, DIY culture, and a lot of people are saying, Oh my God, death and dying is so expensive! I wrote this book to show that it doesn’t have to be, and to give people the tools to handle loved ones’ deaths themselves.

So, you’re a funeral director telling people they don’t necessarily need to have or pay for a traditional funeral. . . . Have you experienced any pushback from your own industry?

Not a lot, although there are certainly some people who find the whole green death concept a little outrageous, don’t see the profit-making angle, and think this is just a trend that’ll go away. And that’s discouraging, because our role as morticians is to provide options for people who are going through a horrible time. And of course, this isn’t a trend. What was just a trend is the traditional funeral industry. It’s experienced a lot of growth with the last 50 years, but before that—and especially before the Civil War—burial was far more natural.

There are presently more than 150 green burial sites in America, compared with just a handful a decade ago. Why do you think green burial is on the rise in the U.S.?

A lot of it has to do with today’s generation of end-of-life decision-makers. Baby Boomers, who were born between 1946 and 1964, started recycling and launched Earth Day and put a lot of ecological concerns on the world’s radar. They’ve walked the walk during life, and a lot of them are thinking that a green death wouldn’t be that bad. Baby Boomers are making choices for their parents too.

And again, there’s the issue of rising costs of death—the average American funeral now costs $8,000, and people are saying, How do we afford that?! So, cremation has become more popular. But while that helps you avoid the consequences of embalming fluid, we’ve now learned that cremation’s carbon footprint isn’t so fantastic. So, let’s push further.

You write about being a kid who obsessively read about different cultures’ death rituals in National Geographic, and your book is peppered with insights about various internment practices and beliefs across the globe. Did any other cultures inspire you to become a funeral director who specializes in green death?

So many of them! In parts of the Philippines, for instance, they just make plain caskets out of a single piece of wood and hang them from cliffs; other Asian cultures leave bodies out for the vultures, and in places like India, many just do a funeral pyre. And then there are Viking funerals and other types of at-sea burials. All this stuff is pretty darn non-resource-intensive. And then take Sweden, where promession is legal. That’s when they actually cryogenically freeze-dry you in liquid nitrogen and put you on a vibrating table, which causes your body to disintegrate into particles, making you into a dry powder that can be interred in a biodegradable casket. Italians are using biodegradable seed pods to turn the dead into trees—their remains provide nutrients to a sapling planted above it, creating eco burial forests, rather than burial grounds.

But here in America, things are a bit more challenging—we still have reverence for the human body and human remains, so this idea of putting people in the soil, or watering plants with your remains, is very European. But, we’re getting there—there’s Jae Rhim Lee at Stanford, who developed the mushroom burial suit, a garment sewn with mushrooms whose spores help to detoxify and decompose the body, and Washington State University’s Urban Death Project, where you’re laid in a structure with chips to biodegrade, or as they say, recompose, and it works fantastically well. But, this all has to become palatable to the average person to talk about. Greenies are in the lead here.

“In parts of the Philippines they just make plain caskets out of a single piece of wood and hang them from cliffs; other Asian cultures leave bodies out for the vultures, and in places like India, many just do a funeral pyre. And then there are Viking funerals and other types of at-sea burials. All this stuff is pretty darn non-resource-intensive.”

Your book takes a very warm, open, and never morbid approach to the subject of death. Can you talk about societal comfort levels with death and how they affect the green burial movement?

We used to keep loved ones’ bodies in our homes for a while, but nowadays, funeral directors come and take them—our ethos is to just call the undertaker so we don’t have to think about or deal with any of the messy parts of death. But now people are realizing, partially thanks to the wonderful interwebs, that we have choices, and I think we’re slowly becoming more comfortable with death. A younger generation of funeral directors—the old man with the clammy hands is far from the norm nowadays—is trying to embrace more modern practices. Celebrations of life are becoming more popular, and I love the concept of the living funeral—if you know you’re gonna pass soon, rather than having a party when you’re dead, have it when you’re alive and can still enjoy being honored and listening to all the good things people say about you. People truly are embracing more choices. And when you consider Mother Nature and the drive to honor Earth as this gorgeous, loving place, you can engage in dialogue with people who’ve perhaps never talked much about death before.

What if someone wants to embrace green burial, but she lives somewhere like Manhattan and so can’t expect her loved ones to bury her in the backyard?

There’s certainly no perfect way to do it; it’s about shades of green. Consider 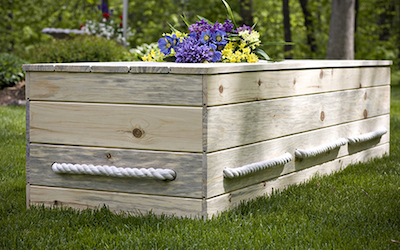 that every state now has at least one cemetery that allows for natural burial, up from just a dozen nationwide a decade ago. It’s legal everywhere now; you just have to be diligent about calling the county and finding the often small cemeteries that don’t require a concrete grave liner. And plenty of companies are offering green burial caskets that use a basic liner, such as a wicker basket. But the movement goes beyond burial itself. Maybe you want to make sure your loved ones know you want local and organic food served at your reception and no cut flowers. Maybe you want to have guests carpool to your service, or you want to be buried in the sheets from your bed. There are all sorts of ways to approach green death. Like, on one hand you’re making a horrible choice if you insist on going into a mausoleum, but if it’s what best helps your family cope, then fantastic. Let’s find you some other ways to be part of the solution.

What’s next for you?

I’m working with someone right now to secure a place in Portland, Oregon, for an official green burial cemetery. I have to keep it under wraps right now but will be revealing more later in the year. It’s been a really fun process—we’re working to get community muralists to paint the wall behind it, and to find passionate underwriters, and to make this a really comfortable, beautiful place that will truly honor the people interred there. It’s been great to meet and talk to all the fantastic people who’ve come out of the woodwork to talk about how doing something good for the planet can really help grieving loved ones heal.