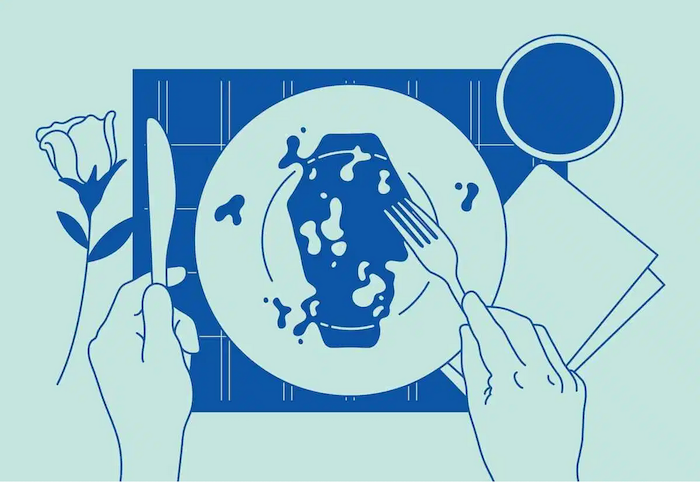 The dinner table is the most natural place for human connection and difficult conversations.

This statistic is what helped the founder of Death Over Dinner, Michael Hebb, to recognize the opportunity in creating meaningful conversations around death… over dinner.

“The dinner table is the most natural place for human connection and difficult conversations. The comfort of food and drink goes a long way toward taking the edge off of this topic,” says Hebb.

What is Death Over Dinner?

Death Over Diner was launched in 2013 as an extension of a conversation with friends and colleagues around things that matter. It turned out that amongst topics, death was a central theme –– the fears most harbor about it, both for ourselves and those we love.

The Death Over Dinner website walks individuals through how to host their own dinner, including choosing something for your guests to read, watch, and listen to prior to the dinner.

Since launching, Death Over Dinner has become a global phenomenon, with people holding death dinners every day all over the world. From New York to Seattle, and everywhere in between, more than 200,000 people have used DeathOverDinner.org to talk about:

Collaborators including Chase Jarvis, Arianna Huffington, Dr. Oz, The US Surgeon General, and Former Senate Majority Leader Bill Frist have all hosted robust conversations over dinner, as well as have set up an online tool to help others have this important conversation. In 2017, Death Over Dinner joined social wellness venture RoundGlass to expand their mission and reach.

To get a better understanding of how (and why) this started, what is happening now, and where it is going now that the death wellness movement is in full swing, let’s dive in to some questions.

How did Death Over Dinner Begin?

Death Over Dinner actually began as a graduate course Hebb taught at the University of Washington in the Communications Department.

Over a four-year time period, Hebb and a variety of different students and collaborators including Chase Jarvis, Arianna Huffington, Tom Kundig, and Kate Bailey, explored how they could scale meaningful dinner table conversations about critical issues we face as humans.

In the second year, they landed on death and end of life as the primary topic, inspired by the tremendous gap between what people want at the end of their lives and what they get.

The life changing statistic that 80% of people want to die at home yet only 20% of people do was the primary inspiration for the future of Death Over Dinner.

Death literacy was at an all-time low, and open conversation could potentially revolutionize the health care system. The team recognized that a grassroots movement was needed.

Since then, Death Over Dinner has spread across the world, with people holding death dinners every day across the globe.

How Many Death Over Dinner Events Have Been Held?

Since the events are independently organized and people re-use the resources multiple times for multiple dinners, it will always be difficult to know the precise number of dinners held.

The conservative estimate is that 200,000 dinners have taken place, which means that roughly 1 million people have sat down and had the experience of talking about death with others in their family and/or community.

Regional partners have helped launch platforms in Australia, India and Brazil and two years ago the Jewish Edition of Death Over Dinner was launched in partnership with about 30 rabbis.

The Healthcare Edition build in partnership with the Cleveland Clinic is currently in beta and being tested by dozens of the leading health care systems in the US.

For the founder, Hebb, there is nothing more thrilling than to sit down with doctors and nurses and see precisely how meaningful these conversations are to those who are facing death everyday.

How Do The Death Over Dinner Resources Help People Facing Death?

Let’s face it, no one is truly an expert on death. Few people have experience with death and many choose to run far from a conversation about it. End of life conversations are inherently difficult to initiate and can be stressful to navigate for anyone.

That’s why Death Over Dinner strives to make the process crystal clear, and formulated the concept similar to a board game. When you know the rules, it’s easier to relax and just play.

Designed to be held without facilitators, Death Over Dinner gives a little guidance to get started. From there, people intuitively know how to talk about what is most important to them.

Death Over Dinner encourages people to not edit their responses and to say things they are afraid to say. Doing this brings individuals closer to knowing their priorities, and it brings them closer to the people in their life.

Why Are Death Over Dinner Conversations So Important?

The impact of grief on our well-being can be detrimental and difficult to calculate.

Roughly 25% of us are actively grieving, which begs the question, how are we grieving? If we don’t know our loved ones wishes, will we grieve longer and more intensely? Will we carry regret and have difficulty letting go?

Not to mention that the end of life expense is the number one cause of personal bankruptcy in the United States.

However, when we face our mortality, there are many beautiful things that happen.

“There is no better medicine than end of life awareness to give you clarity about what is truly important to you, your values, your priorities, how you want to live.  Life becomes more clear and sacred when we thoughtfully and intentionally face our impermanence,” says Hebb.

Studies done by Dr. Jordana Jacobs and other leading psychologists prove that talking about death actually increases our capacity to love. Other studies have shown that we become funnier and laugh more easily after being primed for death.

“There are two basic motivating forces: fear and love. When we are afraid, we pull back from life. When we are in love, we open to all that life has to offer with passion, excitement, and acceptance.” John Lennon

What’s Next For Death Over Dinner?

When Death Over Dinner was created, Hebb’s moonshot was that they could find a way into the center of the American medical establishment and inspire clinicians to talk about death in an open hearted and vulnerable way.

Knowing that oncologists, nurses, survivors and cancer patients are breaking bread every month at Memorial Sloan Kettering takes Hebb’s breath away when he gets present and lets it sink in.

“To think that we are really just at the beginning seven years after we launched, just starting to crack open the potential of this conversation, that is awe inspiring,” says Hebb.

Since the launch of Death Over Dinner in 2013, death literacy in the US has increased, and people are beginning to make more empowered decisions. The global death wellness movement and conversations around end of life are now front page news.

People are getting more creative, using their imagination for planning their last chapter and planning memorials.

There’s a shift from a reactive to a proactive approach to end of life well-being, and the movement is just getting started.

Learn more about Death Over Dinner and plan your own dinner today.