Judy Chicago is well-aware she’s going to die one day — and she’s coming to terms with it. In her newest body of work, the 80-year-old feminist artist reckons with her own mortality, as well as the untimely death she fears for the planet’s threatened species and ecosystems.

“The End: A Meditation on Death and Extinction,” at the National Museum of Women in the Arts, consists of nearly 40 works of painted porcelain and glass, plus two large sculptures. It’s divided into three sequential sections: “Stages of Dying,” “Mortality” and “Extinction.” Chicago’s new series is “luminous,” according to exhibition curator Virginia Treanor. “I think it’s going to be a really contemplative experience. People will be moved by it, for sure.”

Here’s a closer look at five of the pieces on display.

An aged, bald woman cradles her face in her hands in this white porcelain piece, which is part of the “Stages of Dying” section of the exhibition. The figure personifies one of the five stages of grief: denial, anger, bargaining, depression and acceptance. These stages can apply both to those who are grieving the loss of someone and to those grappling with their own end. The older woman Chicago depicts is intended to represent an Everywoman, as well as the indiscriminate inevitability of death. “For so much of human history, the male figure has been the archetype of humanity,” says Treanor. “We say, ‘mankind.’ She wanted to shift that paradigm and make an Everywoman rather than an Everyman.”

A woman’s eyes are closed, her head resting on a pillow, hands clasped around a bouquet of lilies. The bronze sculpture is a self-portrait of the artist, who in the “Mortality” section of the show imagines different scenarios in which she might die. “Mortality Relief” pays homage to traditional death masks, which were used from the Middle Ages until the 19th century — before the advent of photography — to preserve someone’s likeness after death. Treanor describes the sculpture as “peaceful and serene.” 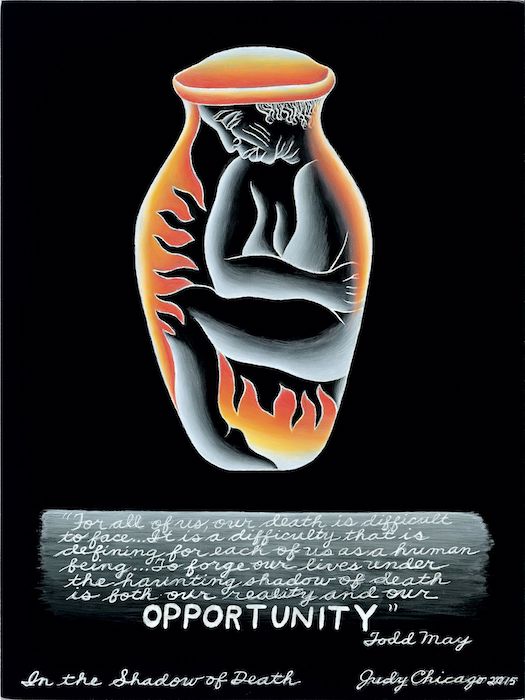 In the Shadow of Death

Thirty of the pieces in “The End” — including this one from the “Mortality” section — are kiln-fired paintings on black glass: a laborious process that requires multiple firings. Each time something’s put into the kiln, there’s a risk that it’s going to break, which means that the artist needs to be exacting. “In the Shadow of Death” is engraved with a quote from philosopher Todd May, reading, in part: “To forge our lives under the haunting shadow of death is both our reality and our opportunity,” with an emphasis on the word “opportunity.” It’s Chicago’s way of noting that there’s no need to fear death. “We have this opportunity in life because we know it’s finite,” Treanor says. “It’s going to end at some point.”

A woman, once again a self-portrait of Chicago, is curled into the fetal position, text wrapped around her body — “Will I leave as I arrived?” — in this kiln-fired painting on black glass. “Linking the experience of birth and death is powerful in a visual way, but also in an existential way,” Treanor says. She particularly lauds Chicago’s use of a wrinkled, aged figure. “This is classic Judy Chicago, and it’s one of the reasons I love her and her work so much,” she says. “She’s constantly pushing the boundaries. Nude women in art are a dime a dozen, right? But very rarely do we see an older nude woman. Very rarely do we see older women at all.”

In “Extinction,” the final section of the exhibit, Chicago turns from pondering individual death to the obliteration of entire ecosystems and species. A gaunt polar bear clings to a melting iceberg in the black-glass painting “Stranded.” Other works depict elephants killed for their tusks and trees flayed of their bark. Capturing that kind of destruction requires extensive research, which Chicago has described as an emotionally draining experience. “It was interesting to hear her speak about these works, and equating the physical exertion that went into them — like multiple [kiln] firings — with the emotional toll it took on her,” Treanor says. “She said it was really gut-wrenching.”

Judy Chicago — The End: A Meditation on Death and Extinction

Admission: $10; $8 for seniors and students; free for members and visitors 18 and under.