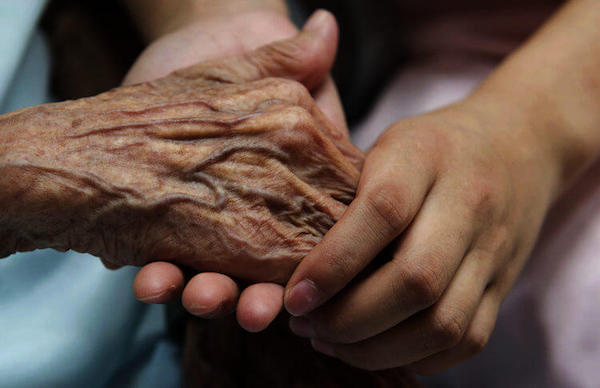 [E]lizabeth George was “tickled” to see what came after death.

She knew what she wanted her death to be like and she wasn’t afraid.

Diagnosed with colon cancer in 2010, Elizabeth told a friend she wanted three things to happen when she died: A singing circle, for a few select people to be present, and for her body not to be “whisked” off right away.

“Elizabeth really wanted to have a good death,” recalls one of her close friends, Ruth Blaser.

A childhood experience with death may have been what made Elizabeth so particular about her own passing. She lost her mother at age 11.

“She felt like the family response had been extremely unhealthy,” says Emily Wilson-George, one of Elizabeth’s two daughters. “They basically took everything that had belonged to her mother out of the house within the week and never spoke about it. She didn’t want that or anything remotely similar.”

Three days before she died, Elizabeth met with two death doulas. Together, along with friends and family, they ensured her death would go as planned.

A home vigil was organized. Elizabeth’s body was not whisked off to the morgue or a funeral home. Rather, she was moved to her dear friend Joyce Bethune’s house, gently placed on a massage table in a room full of tropical plants and a water fountain — a place where she found peace.

Elizabeth’s fearless and accepting attitude toward her own mortality is often the exception.

“When you talk to people about how they feel about their own death, it’s a bit of a mood killer,” says Wilson-George. “It’s not really considered an acceptable topic of conversation.”

But an emerging cohort of death doulas in Regina is bringing death, dying and grief out of the shadows and into the light.

“There seems to be more healing when we can be sharing through grief, sharing through death,” says Denise Seguin Horth, one of the death doulas who met with Elizabeth. “So many other cultures embrace death more.”

Seguin Horth trained to become a death doula in 2016, through Beyond Yonder Virtual School for Community Deathcaring in Canada.

“I feel that people have been so distanced from death that grief is heavier. It’s almost like a secret … It weighs on you and it just keeps you anchored down,” says Seguin Horth. “When we can talk more about death and talk more about grief openly without the taboo, … it seems to help that energy flow elsewhere so that we can move on.”

Sharon Pulvermacher — who also met with Elizabeth — did her training in 2014. She has been fascinated by death and the stages of grief since Grade 12 when she wrote a paper on death and dying.

Pulvermacher says being a death doula not only gives the dying person and their families a safe space to express themselves, but it’s also an opportunity to share with them their end-of-life options.

She says many people don’t even realize it’s within their rights to take the body of their loved one home for a vigil or home funeral, if that’s what they want to do.

“It’s … giving them a few more ideas, a few more tools, that they can imagine a little bit more largely than what they would do otherwise,” says Pulvermacher.

Definitions vary, but the core role of death doulas is to provide comfort and support to the dying and their families. Death doulas do one-on-one sessions, home vigils, simply sit with the dying person in the hospital holding their hand, and more.

“All death doulas have different niches. For me personally, I feel drawn more to accompanying those who are dealing with grief,” says Seguin Horth, who volunteers at Regina Wascana Grace Hospice.

She works with a variety of people — those who may have lost a limb or a pet, recently divorced or, like Elizabeth, someone who is in the last days of their life.

Besides the practical services death doulas offer, such as planning home funerals or helping with living wills, they also act as a sounding board for people to express their fears and musings about death, the afterlife and more.

A death doula brings no emotional or personal baggage that a friend or family member might and allows people the freedom to express themselves fully.

Phyllis Farley, a key U.S. figure in the birthing centre movement, attended an end-of-life care conference in 1998. At the time, she was a chairwoman at the Maternity Center Association, an organization devoted to providing high-quality maternity care. She realized the same hands-on help and emotional support women receive when giving birth is just as important during death.

“We’re more than willing to, and very happy to in many cases, celebrate the birth of a child. While the potential of connections and the wonderful things they might do is always there, we don’t know that, but yet we celebrate it,” says Charisma Thomson, a professor at the University of Regina whose research centres on the anthropology of death.

But we deal with death differently.

“Here we have an individual at the end of their life, who we should be celebrating because we know what they’ve accomplished,” Thomson says. “Yet it’s that moment when … people just turn their back on them and really kind of silence their voice.”

At 80 years old, Farley founded an organization called Doulas to Accompany and Comfort the Dying. The program taught doulas how to listen and relate to the dying person, as well as do more practical things like helping with a living will.

The field grew and made its way to Regina, where there are about 10 death doulas. Some charge for their services, some don’t. Every death doula is different, and every person who seeks their services is looking for different things.

For Elizabeth’s daughter, the death doulas were invaluable.

“I think that having the death doulas not only provided the ritual that allowed us to process (her death) better, but it relieved a lot of the pressure,” she says. Not having to worry about the practical and procedural aspects of the vigil meant she could focus on being with her mom and getting closure.

But for many, the response to death may be much like when Elizabeth’s mother died — pushing death away.

Thomson traces society’s shift — from direct involvement in what happens to the body after death, to the current very institutionalized process — back to the Civil War in the United States, when embalming became common practice.

“You have Dr. Thomas Holmes during the Civil War starting to use embalming to send the soldiers back home … Once we start to add this clinical aspect to it, people I think believed it was beyond their abilities,” says Thomson.

As embalming became more popular, families sought professionals to do it — taking aftercare out of the hands of the family.

Around the same time, society decided priests were not qualified to declare time of death, and from then on only medical specialists could. Thomson says this shift also pushed death closer to the clinical realm rather than a personal one.

“We view death, or in North America anyway, … as though it is an illness or a disease or something that we can overcome with technology and science,” says Thomson.

And today, death happens in a hospital more often than not. When somebody dies, their body is typically moved to the morgue or the crematorium swiftly, giving family and friends little time with the body.

Bethune remembers a different time when home vigils were common.

“There was time for people to say their goodbyes and the whole process was a natural process,” she says. “I think we’ve just gotten so far away from that.”

She says having death doula services to help with things like home vigils or simply talking people through death is essential.

Elizabeth wanted her family to have the time to say goodbye. So instead of denying the inevitable, she met it with playful curiosity.

“I know it sounds strange, but I’m a bit tickled at what’s coming next,’ Elizabeth told Seguin Horth, who describes that approach as beautiful. “She went past the fear.”

During her meeting with the death doulas, Elizabeth was asked about her belief system and what she wanted her friends, family and the doulas to do when she died. According to Blaser, they also asked her what she imagined death to be like — a bold question friends and family might not feel comfortable asking.

“It was like mom didn’t have any doubts about what the death doulas were about,” says Wilson-George. “I was sitting there being like, who are these people? They’re sitting in on what’s a pretty personal time.” But in the end, she was grateful for their role in her mother’s end of life.

When the time came, Elizabeth’s vigil lasted a full 24 hours.

Someone from Alternatives Funeral & Cremation Services moved Elizabeth to Bethune’s home from the hospice, which she had entered just five days earlier. With no official certification or oversight board, death doulas are restricted from physically transporting a body.

“We sang her out of hospice with a favourite song of hers, and she had a quilt that had been made specially for her, draped over her,” recalls Pulvermacher.

Then they sang her into Bethune’s home where Seguin Horth and Pulvermacher positioned her body on a massage table and placed ice packs around her — looking after the practical and hygienic aspects of the vigil. They also made sure the family knew what to expect in terms of how the body would act in the hours after death.

A few close friends and family stayed the entire time. Others came and went to pay their respects. More songs were sung and memories of Elizabeth shared. Wilson-George remembers the feeling in the room as surprisingly intimate and radiantly positive.

For Blaser, the process with the death doulas helped her prepare.

“When Elizabeth died, I (felt) a sense of peace that we really accompanied her well and that it was her time to go,” she says. “That doesn’t mean that I don’t miss her. I do. But it’s not a wrenching kind of grief.”

For Emily Wilson-George it meant closure. After having seven years to imagine what her mother’s death would be like, Wilson-George went through so many different kinds of dread. The death doulas, along with friends and family helped minimize that fear.

“I think that they way that we managed to honour her death was something she would have approved of,” she says. “The feeling in the room that evening with the death doulas … it was so positive.