Before dying or almost dying, the conventional anecdote is that people see a flashback or a white light and have an out-of-body experience. But Barbara Olson, a retired social worker, saw darkness and Darth Vader as she started accepting her end. She had fallen out of a raft 20 years ago in Maine. “I kept having all these ‘Star Wars’ images of Darth Vader… Our guy on the raft [had] a ‘Star Wars’ name so that’s why I started thinking Darth Vader,” Olson said. “The other thing I kept thinking about is, I was with a man that I didn’t know that well … I was worried about my father and what he might think.”

These conversations arise at a death cafe, a gathering where people enjoy cake and tea while discussing death and mortality in a safe space. Death cafes can be held anywhere — a home, a coffee shop, and in this case, a cemetery. Inside the regal gothic revival-style Bigelow Chapel located on top of a hill at Mount Auburn Cemetery, a diverse gathering of strangers treated themselves to cupcakes and tea before settling down in chairs arranged in circles. Boxes of tissues lined the walls, should anyone need one.

Death cafes are modeled after 19th-century salons where people convened for intellectual discussions. Bernard Crettaz, a Swiss sociologist, introduced the idea of death cafes in 2004 and Jon Underwood popularized them, hosting the first death cafe in his London home. Soon enough, death cafes were embraced across the world.

Death, famously called the “great equalizer” by journalist Mitch Albom, obviously sparks curiosity and questions. But many repress asking those questions out of fear. The topic is perceived as taboo and difficult to confront, even though death surrounds us. 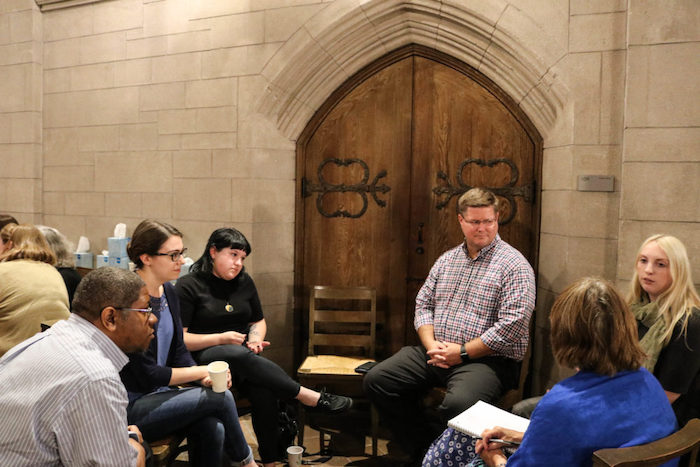 “One of the eternal questions that we, as humans, have is about the meaning of life and part of that discussion stems from what happens after life, which is death,” said Bree Harvey, vice president of cemetery and visitor services at Mount Auburn Cemetery. Death is a daunting subject to grapple with, but the growth of the death positive movement and death cafes bring conversations about death to a more nuanced, collective grappling.

Far from a grim consortium of goths, death cafes attract people from all ages and walks of life. In my discussion group alone, there was a nonprofit worker, scientist, mortuary school student, yoga teacher, hospice volunteer manager, retired social worker, and Mount Auburn Cemetery employee. For all but one, it was their first time attending a death cafe. Before beginning our discussion, we were told ground rules to foster a comfortable and respectful environment: listen, speak your truth, share the air, respect, accept and expect, and self-care.

Olson said she attended the death cafe because she couldn’t talk about death with people in her life. “If you go by statistics, I’m three-quarters through my life and very aware there’s an end. I’ve seen people very scared in their life at the end, and people who have not been actually. I do think sort of normalizing and talking about it is very normal.”

Talking about death could be increasingly common with climate change. The thought of a mass extinction lurking around the corner brings great anxiety and urgency to make the most of our lives. “To have to envision that happening in my near or far future is the scariest part for me,” said Michelle Frasca, a mortuary school student, at the death cafe. Because of climate change, Frasca said she would rather not be immortal if given the choice. “I’m so much of a pessimist that I’m like, it’s going to be terrible, I’m going to have to watch people die, I’m going to have to watch the world die.”

Corinne Elicone, events and outreach coordinator at Mount Auburn Cemetery, may only be 25, but she’s already bought a plot at Mount Auburn Cemetery. Elicone had an experience where medical professionals did not respect her grandfather’s end-of-life wishes. “He wanted no life support, he didn’t want to get food or liquids. He was in the resuscitating area to be revived. And I had to go into that hospital room and tell the nurses to unplug his fluids,” Elicone said at the death cafe. “It made me feel like there’s nothing I can do when it comes down to it, people are going to do their daily tasks.”

However, not everyone gets to make their end-of-life plans. Just like there’s inequity in life, inequity persists in death. “There’s no grand conversation on access to a good death. Who gets to die well in this country? People with money. They get comfort and they have care and they have shelter and they have music and soft linen. And people who don’t have money don’t really have options,” said Lashanna Williams, a death doula and executive director at A Sacred Passing.

Death grounds and humbles us, in addition to helping us prioritize our lives, said Eric Redard, a hospice volunteer manager, at the death cafe. Daily life is filled to the brim with pressures: You work until you die and along the way, fear failure and inability to fulfill your dreams. Is contentment all we can ask for?

Olson, who recently moved to a new home, said that she felt a newfound peace that isn’t quite happiness, but it is enough. “I could just sit on the back porch and listen to the crickets all night. I don’t feel like I need to do anything … I started thinking, if I should die anytime between now and the next 20 years, which is quite likely to happen, I want to feel this way.”

The leaves are green and awaiting to burst into shades of gold, orange and red, but in a couple months, they will fall to the ground and decay. Like fall, a season that brings both renewal and decay, death is full of dualities: denial and acceptance, mourning and comfort, and loss and living with intention. Death cafes show us we don’t have to reckon with it alone.