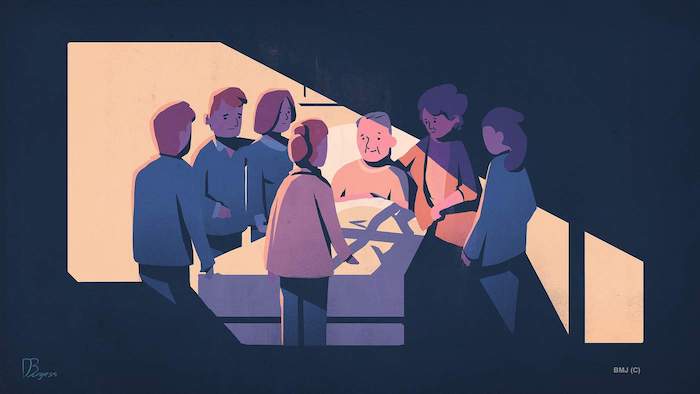 I am a gynecologic oncologist and I’m boarded in palliative care. As a result of my training and 20+ years of clinical experience, I feel strongly about caring for the whole patient throughout the clinical course: spiritually, emotionally, and physically. In those 20+ years, I have experienced the end of life with many patients and families. Although everyone handles it differently, I’ve observed some common themes. It is difficult to stop treatment, to accept the inevitable with dignity, to die “well”—not just for the patient and her family, but for her providers as well.

This past Christmas, I experienced the death of a loved one both as a family member and a health care provider, acting in the stead of the health care providers who were absent at the end of life. The experience of my father in law’s passing brought home to me that inappropriate aggressive measures at the end of life are not limited to patients with cancer, but affect us all.

I met my husband when we were freshmen in college, and we spent a lot of time at his father’s home together. My husband has a big Catholic family who are all rabid Eagles fans; I am a Jewish liberal girl raised on the Boston teams. They accepted me unconditionally. I shared Sunday dinner with his family, brought my laundry over, watched movies on his dad’s TV. When my husband and I were married in a Jewish ceremony in Boston, everyone in his family came to the wedding and thoroughly enjoyed the ceremony and dancing the hora at the reception.

My husband’s family, and particularly his father, were an important part of both of our lives. My father-in-law, Ron, was a philosophy professor and a brilliant man who loved to argue (he would say debate) with his children. While he and I disagreed about many things, I never felt judged by him, or by anyone else in the family.

In the last few years, I could tell that Ron was sick, but he was private about the details and I didn’t pry. I did know that he had multiple stents placed in his cardiac vessels. This past year, though, there had been a significant deterioration in his condition. He had to stop golfing due to fatigue, and he was in and out of the hospital with shortness of breath and chest pain.

In December, I visited the community hospital where Ron was receiving care; his third prolonged admission in as many weeks. I found him sitting in a chair wrapped in a heavy blanket in an overheated room. He had lost a lot of weight and looked frail. He had to lean forward to breathe. A few weeks before my visit, he had undergone another cardiac catheterization (there was nothing more to stent) and a renal artery catheterization that showed bilateral significant occlusion.

Ron told me he expected to get better and get back to the golf course. I told him I wished for him to get well enough to go home and stay out of the hospital.

I had spoken to his wife on the telephone before the renal artery catheterization. I talked with her about requesting a palliative care consult as Ron was clearly suffering. We discussed the hard questions I was hoping would be addressed. I don’t know if she asked these questions. I do know that the doctors convinced her that the renal artery catheterization might help him. I know that they didn’t offer a palliative care consultation and I know that they didn’t tell my in-laws that Ron would not get better—that his current state was the best they could hope for.

On Christmas morning, my husband and I received a panicked call from Ron’s wife. When we arrived, he was clearly in distress. An episode of melena (that apparently wasn’t new) needed to be managed urgently. I spoke to his primary physician on the phone, who suggested we bring him to the ED. I asked him if the ED was the best decision; wouldn’t hospice be a better option? Yes, he said, it would. In fact, he said he had been thinking about this for the past two months. This revelation shocked me. Why, I asked him, had he not said anything to the family? Why was he continuing to recommend and pursue aggressive care in this 81-year-old man who was clearly declining? There was no good answer to this question.

And so it fell to me to tell Ron’s wife that he wasn’t going to get better, and that she had to make a choice: take him to the ED, where he was likely to be admitted to the hospital for another prolonged—and futile—stay, or keep him at home and call hospice. I will admit that I supported avoiding the hospital, and for better or worse, I influenced that decision.

I talked to Ron that morning during the intermittent periods that he was awake. He asked me how I knew he was dying. (A good question, but I just knew, an instinct honed over two decades of caring for patients with cancer.) He seemed genuinely surprised to hear that his condition would not improve. He told me he wasn’t ready to die, he had a lot of things left to do. (I asked him to make a list, but he couldn’t stay awake long enough to accomplish this task.) He said he was afraid. He had only that one morning to process impending death, and he never really got to say all of his goodbyes.

Ron died early that afternoon. I was with him. His death was peaceful. He was in his own home, surrounded by his (completely oblivious) grandchildren. It was what we call in medicine a “good death.”

But his family was angry. They weren’t prepared, they hadn’t known, they didn’t realize it would happen so fast. For the most part, they had all believed that he would get better. More than half of them didn’t make it to the house to say goodbye before he died.

I was angry, too. I was furious at Ron’s care providers that day. They never communicated clearly with him or his wife that he was dying, that his chances of getting better were slim. They didn’t discuss quality of life or goals of care. They offered aggressive procedures that were potentially life shortening and unlikely to be helpful, and the family didn’t feel empowered to decline. Their approach was the opposite of everything I believe in as a palliative specialist, an oncologist, a fellow human being.

Unfortunately, this type of aggressive care at the end of life happens often. We live in “a very peculiar, death denying society.”1 As providers, we spend far too much money on procedures at the end of life (chemotherapy, ICU, catheterizations) that are unlikely to benefit our patients, and in fact are likely to decrease quality of life and hasten death.

Why do we do this? Are we afraid to tell patients the truth? Are we reluctant to admit to ourselves that sometimes medicine has nothing more to offer and that death is unavoidable (for all of us)? Maybe it feels too much like failing to say that there’s nothing more we can do, even when there are other options (such as palliative care and/or hospice) that are far preferable to aggressive medical procedures and prolonged hospital stays.

A few weeks after Ron died, his wife called me. She wanted to talk about the decision we made to keep him home. She wanted to know if this was the right choice: if she had taken him to the hospital that day, would things have been different?

I told her honestly that yes, things would have been different—they would have been horribly worse. Ron would not have lived longer, and he certainly wouldn’t have died at home, in his bedroom, in his recliner, surrounded by his family. We could have painfully prolonged the dying process, by a few hours or a few days at most, but we could not have stopped it. She had made the right decision.

Here is the fact that we cannot avoid: We are all going to die. Whether we cheer for the Eagles or the Patriots, whether we are philosophy professors or medical professionals (yes, even us). I believe it is fair to say that most of us want to die that “good death,” surrounded by our family and friends, not attached to machines in a sterile hospital environment.

As providers, we must take that extra step to be honest with our patients and prepare them for the truth. To do less—to gloss over the inevitable end of life and deny them the opportunity for a good death—is to do our patients a profound disservice. For myself and for my family, I hope that our own health care providers will be honest with us about what medicine can and cannot accomplish in improving all aspects of health.

My pain at losing Ron is mitigated in a small way by knowing that I helped to spare him from discomfort and loss of dignity in the final hours of his life. I am so glad that, as a palliative care provider and cancer physician, I had the training and experience to do this small thing for the man who welcomed me so wholeheartedly into his family.