Prolonged grief disorder, a new diagnosis, is to grief what long covid is to covid 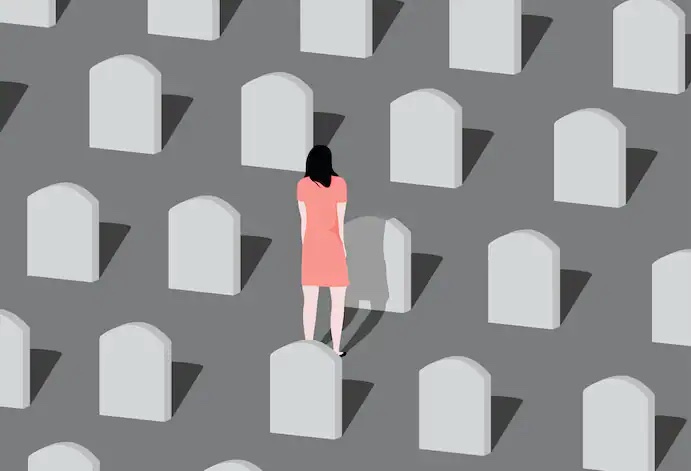 After I lost my only child more than 20 years ago, I told three lies over and over.

Yes, I’m fine, I said when people asked how I was doing.

I said this in the first year because I was in shock and didn’t have the words to begin to describe what I felt. My son was 7 when I got the phone call that he’d died unexpectedly while visiting his grandparents. The fact I wasn’t there to hold him in his last hours haunted me.

I said it in the second year because by then I’d instinctively absorbed the message that it’s not culturally acceptable to continue to talk about deep sadness more than a year after a loss. It makes people uncomfortable. It makes people feel they should be able to do something; it makes them feel helpless.

I said it year after year to convince others I was okay. I said it to convince myself. It worked, for the most part. Three years after my son’s death, I went back to my job as a journalist for the Seattle Post-Intelligencer. I smiled, laughed even. To the outside world, it looked like I was “over it.” But I was living in my own private snow globe. I avoided relationships, old and new.

Yes, I’m happy I’ve moved back, I said when people asked about my return to Seattle from California. I said it to deflect deeper conversations about hard decisions. I said it so I didn’t have to talk about why I moved, so I didn’t have to utter the words: My son died. My giggly little boy with eyes the color of maple syrup, who loved trains, and T-ball, and “101 Dalmatians.” My son, who was deaf and helped me see both language and the world around me in a brand-new way. My son, who pressed his hand to mine when we signed I love you, and whose hugs I sometimes still feel in my dreams.

The third lie was the hardest.

No, I don’t have children, I answered for years when people asked. This would later send me into a spiral of shame and agony. “No” felt like denying he had ever lived. “Yes” forced me to explain that he was dead and brought up memories that were still too painful.

These lies kept me frozen for a long time.

It was only recently that the American Psychiatric Association put a name to what I most likely experienced: prolonged grief disorder. The organization included prolonged grief disorder in the updated Diagnostic and Statistical Manual of Mental Disorders (DSM-5) it published in March. The diagnosis refers to intense emotional pain that persists more than a year after a loss. Criteria include numbness, withdrawal, an inability to rejoin the normal stream of life. Those who lose children are at particular risk, as are those who lose a loved one to violence, natural disasters or other tragedies. Those without support systems or who have other significant life stressors are also at risk.

The identification of prolonged grief disorder comes at a time when it may be especially needed. Deaths from covid-19 in the United States have now reached 1 million. With covid’s grim bereavement multiplier, that could mean millions more at risk for prolonged grief. This kind of complicated mourning is essentially to grief what long covid is to covid.

The official inclusion of the diagnosis caps years of debate over whether labeling something “prolonged grief disorder” amounts to pathologizing grief. None of us escapes without losing something or someone we love dearly. The process of grieving a loved one is as individual and idiosyncratic as the person who has died. Critics argue that to suggest otherwise is to indicate that a normal process is a disease.

But lost in this heated discussion is what it’s like to live with deep grief year after year. We are taught to suck it up. We are taught to power through. We get our few days of “bereavement leave,” and then we’re supposed to get back to work. There’s not much of a grace period when it comes to grief. And because of that, long-term grief has been invisible to those who most need to recognize it.

During the pandemic, I attended a virtual conference for families who have lost children. One of the other bereaved moms gave a presentation about complicated grief. She ticked through some of the signs and symptoms: intense yearning that interferes with normal life more than a year after the death, numbness and disbelief, avoidance of social contact, difficulties moving on. It was as though she were describing my life in the 10 years that followed my son’s death.

For the first time, I didn’t feel inadequate for the difficulties I had adjusting to the loss of my only child.

I never received an official diagnosis back then because such a diagnosis didn’t exist. I didn’t even associate many of my behaviors with grief. Neither, apparently, did those around me. No one suggested that my growing social anxiety, my persistent nightmares or my general paralysis in life might have been due to grief. And because of that, I never thought to ask for help. I wish I had. I believe it would have made me feel less alone — less “defective,” not more so. I don’t think the new diagnosis pathologizes grief so much as makes it visible to those who suffer it and to those in their lives who might be able to help. Maybe the best thing that can come from the new diagnosis is not the view that long grief is disordered or maladaptive, but that it exists for some, is a normal response to an abnormal situation and deserves compassion.

We often say of parents who have lost children that they will never be the same. This is necessarily true, as it is for anyone who has suffered a profound loss. But it doesn’t mean we can’t eventually integrate that loss in such a way that life has meaning and joy again. To get there, though, requires all of us to be more aware. Recognizing when someone’s behaviors might be grief-related, even years later, could encourage more of us to talk about it, might make it okay to say Yes, it still hurts, when someone asks how we are doing. It might make it okay to get a little help. And the loved ones of at least some of the million Americans who have died from covid-19 are bound to need it.