For tens of thousands of years, humans have developed funeral rites and burial practices that reflected the attitudes of their particular time and place. These traditions of honoring the dead continue to evolve into the 21st century, as people seek “green burials” that are more environmentally friendly than standard coffins.

One of the newest examples comes from Loop, a Dutch biotech company that recently unveiled a biodegradable coffin made of fungus, microbes and plant roots. Called the “Living Cocoon,” the coffin is designed to hasten bodily decomposition while also enriching soil around the plot.

“Normally, what we do as humans is we take something out of nature, we kill it, and we use it,” said Bob Hendrikx, founder of Loop, in a call. “So I thought: what if we humans start moving from working with dead materials toward a world in which we work with living materials?”

“We would not only become less of a parasite, but we could also start exploring super-cool material properties, like living lights, walls that are self-healing, and that kind of stuff,” he added.

Hendrikx was inspired to develop the Living Cocoon while presenting a living home concept at last year’s Dutch Design Week. While houses are obviously for the living, Hendrikx got to thinking about adapting the concept into a coffin powered by mushroom mycelium, which is the filamentary vegetative part of the fungus.

“Mycelium is nature’s biggest recycler,” Hendrikx said. “It is continuously looking for dead organic matter to transform into key nutrients.” 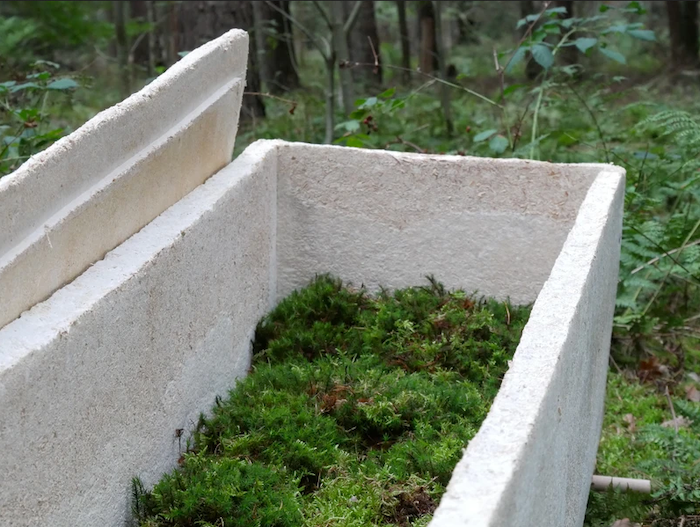 Developed in collaboration with Delft University of Technology and the Naturalis Biodiversity Center, the Living Cocoon contains a moss bed packed with mycelium, plant roots, and a lush ecosystem of microorganisms. It is already on the market in the Netherlands, and has been used for a burial at the Hague.

Initial tests of the coffin indicate that it degrades in soil over about 30 to 45 days, and the Loop team estimates that bodies within coffins should be composted after three years. Mushrooms can also remove contaminants from soil, so the researchers have a “bigger vision” to use the coffins to purify dirty environments.

“We have a dream of having super-new natural funeral-based concepts in which we go to different cities and search for the most dirty soil and start cleaning that up,” Hendrikx said.

“We already have this product launched on the market, but what we want to really know is how long does [decomposition] take exactly, what does the decomposition phase look like, and also—this is super-important—what kind of chemicals can it absorb and in what amounts,” he added.

The Living Cocoon is one of many emerging concepts that aim to reduce the environmental tolls of current mortuary norms. Right now, both caskets and cadavers are treated with chemicals that leach into soil over time, potentially contaminating groundwater.

Green burials are exactly not a new phenomenon, as Indigenous cultures around the world have practiced environmentally friendly mortuary practices for thousands of years. For instance, “sky burials” that expose bodies to high altitudes where they can be scavenged by birds and animals, are still practiced in the Himalayas today.

But more novel funeral technologies such as “water cremation,” in which bodies are broken down in water and potassium hydroxide, are attracting the interest of people who want to tread lightly on the planet, even after they no longer live on it.

To that point, the Loop team thinks that the Living Cocoon will help people access the right end-of-life experience for them.

“I think people are ready for this,” Hendrikx said.