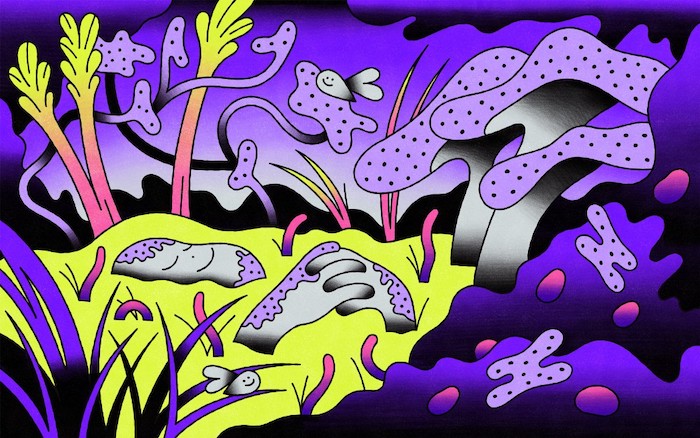 There’s an empty warehouse 20 miles south of Seattle that, if everything goes as planned, will soon be full of dead people.

The facility belongs to Recompose, the first U.S. company to compost human bodies indoors, through a process known officially as natural organic reduction. Washington state became the first — and so far, only — U.S. state to legalize the practice in May 2019. Recompose opens in November. It’s designed to hold the bodies of up to 10 recently deceased people at a time, each of them quietly decomposing into a loamy, nutritious soil, just as their previous owners wanted.

At the most basic level, decomposition is not a new technology; microbes have been doing it extremely well for just about as long as organic matter has existed. But it’s a part of death that Western funeral practices have traditionally gone to great lengths to evade: Embalming a corpse in chemicals with the goal of preserving a “natural” (that is, not dead) look; hawking expensive caskets that claim to seal out nature’s corrupting forces.

Recompose takes the opposite approach.

Against an attractive millennial pink background, the company’s website plainly explains the eco-friendly setting in which clients will decay. Instead of in a single-use casket, bodies rest temporarily in a reusable eight-by-four-foot steel cylinder, packed snugly in a cocoon of wood chips, straw, and alfalfa. For 30 days the dead human and living microbes stay in the vessel together, lying alongside fellow Recomposers in the warehouse’s hexagonal wooden frame, while the microorganisms slowly break down the corpse. At the end, after a brief turn in a curing bin to cool and dry out excess moisture, what once was a human body is now about a cubic yard of fertile, nutrient-rich soil, which can be returned to loved ones or scattered according to the decedent’ wishes. (The company will deliver all or part of the soil free of charge to Bells Mountain, a protected wilderness in southern Washington.) The service costs $5,500 — more than a typical cremation and service costs in the U.S., but about half the cost of burial. Some 275 people have already signed up for the service since reservations opened a month ago, said customer and communications manager Anna Swenson.

“There are a lot of signs and signals that are somewhat apocalyptic that kind of turn you back to your mortality.”

Why hack death? Cremation releases more than 500,000 tons of greenhouse gases annually in the U.S. alone, along with significant levels of mercury emissions. Traditional burial shoves truckfuls worth of metal, concrete, wood, and formaldehyde beneath the ground each year. Cities around the world are running out of traditional cemetery space, and preserving any unmolested open space is hard, even if you’re not trying to get permission to plant corpses in it. Human composting and its kindred green death technologies distill the body from a large, unwieldy, decomposition-prone state to one that is smaller, shelf-stable, and portable, with negligible environmental cost along the way.

There are existential reasons as well. As a pandemic rages and wildfires burn and a general feeling of doom pervades the air, “there are a lot of signs and signals that are somewhat apocalyptic that kind of turn you back to your mortality,” said Jeff Jorgenson, who owns green funeral homes in Seattle and Los Angeles.

“We look at what we’re doing and how disconnected we are from the earth and realizing that we’ve created this mess. We’ve allowed this to happen. And I think that informs decisions and perspectives on death.”

Recompose founder and CEO Katrina Spade was raised in a family of doctors “where it was fairly normal to talk about death and dying at the dinner table,” as she explained in a 2016 TED Talk. That frank approach to life and its end followed her to architecture school, where she became fascinated by a particular design question: How to dispose of her own physical body when she was no longer living in it, without — as she put it — “destroy[ing] the possibility of giving back after we die.”

She admired the example of green cemeteries, where nonembalmed bodies are wrapped in biodegradable materials and buried in a grave about three or four feet deep in which, over the course of about two years, tissues decompose into matter that nourishes the surrounding soil. (Bones can take up to 20 years more to fully disintegrate, according to the Green Burial Council.)

Green cemeteries are lovely places, with trees and plants growing freely without the austere manicuring of a traditional cemetery. There just aren’t very many of them. Only a few hundred of the thousands of cemeteries in the U.S. offer any green burial option, including many Jewish and Muslim cemeteries, whose burial practices traditionally forgo embalming and nonbiodegradable caskets. With composting, the body can go through the same process as it would beneath the soil of a green cemetery, even if there’s no open space for miles.

There’s also the question of one’s final resting place. A body placed in a green cemetery becomes, effectively, a part of that particular expanse of earth. One of the benefits of cremation is that the deceased or their survivors can dispose of the resulting “ashes” however they see fit: scattered in a meaningful spot, divided amongst children, even shot out of a cannon if that feels most appropriate.

Wouldn’t it be nice, Spade thought, to rot closer to home, to turn back into something that feeds the earth instead of takes from it, and to have a say in where the soil made from you goes?

Agriculture has been using natural organic reduction for decades to dispose of dead cows and other livestock on farms. For her master’s thesis in architecture, Spade laid out the idea for a facility where humans could be composted this way, indoors, in a setting that would be both dignified and sanitary.

Upon graduation, she began in earnest to make the business a reality. In 2018 she partnered with the Washington State University Soil Science Department for a study using six donor bodies to confirm that soil produced from human composting would be pathogen-free. The heat produced by the composting process kills almost all pathogens; the only people who will not be eligible for composting at Recompose are those who die with prion conditions, like Creutzfeldt–Jakob (“mad cow”) disease, as the proteins that cause those conditions can remain toxic in soil for years.

Recompose’s vessel is not the only relatively new advance in the disposal of human corpses. The law that made Washington the first (and so far only) state in the U.S. to legalize human composting also explicitly legalized alkaline hydrolysis, also known as chemical cremation.

The novelty of Recompose got more attention, as alkaline hydrolysis was already legal in more than a dozen U.S. states. But because the technology fits so easily into existing crematoriums, chemical cremation, which was also originally developed to dispose of dead cattle, may be the more accessible option at the moment for people without access to a green cemetery or reduction facility.

More than half of the people who die in the U.S. each year are cremated, a process that emits more than 500 estimated pounds of carbon dioxide per body. In alkaline hydrolysis, a body is placed inside a vessel containing a solution of water and the caustic base potassium hydroxide that’s then heated and pressurized. Over about three hours, the pressurized liquid dissolves the body’s soft tissues as fire does in a traditional crematorium. Because there’s no combustion, there are also no greenhouse gas emissions.

The end result of both processes is the same: Bones that are then pulverized into what are typically referred to as the “ashes” of the deceased. Traditional cremains are the color of gray sand. The remains of a chemically cremated body are the pure white of seashells.

Green death tech also expands to engineered materials that line coffins and wrap corpses, and that sell themselves as accelerating the conversion of the former, resource-consuming you into matter that feeds other life forms, the ideological opposite of traditional burial marketing.

“People want their deaths to mean something. They want their bodies to be useful in some way.”

These include the offerings of designer Jae Rhim Lee’s company Coeio, which sells burial garments laced with a mixture of mushrooms and other organic matter that claim to speed decomposition and break down the toxic compounds the body releases. (According to his wishes, actor Luke Perry was buried in one after his 2019 death from a stroke at age 52.) The Italian designers Anna Citelli and Raoul Bretzel created Capsula Mundi, a biodegradable, egg-shaped urn whose creators say should be buried in the ground, with a tree as a grave marker.

New technologies for disposing of bodies allow new ways of mourning the dead. Even before Covid-19 disrupted the ability to gather in mourning, it was a challenge to convene dispersed loved ones and choose a specific place to lay to rest a person who lived their life in multiple cities or countries. The share of people who identify with organized religion has fallen. Secular services that fill the need for mourning rituals have grown in their place.

Recompose is also a funeral home, and eventually, the business hopes to move to a facility large enough to allow for memorial services where loved ones can participate in the process of placing the body in the vessel. The company also plans to offer franchising opportunities in a few years. While patents are pending on the specific design of their vessels, composting itself is not a proprietary idea. In the future, rather than calling the church to organize a service, one may call the closest organic reduction facility.

“People want their deaths to mean something. They want their bodies to be useful in some way,” said Nora Menkin, executive director of the People’s Memorial Association, a Seattle-based nonprofit cooperative funeral home. Over the last six months, there’s been a jump in calls to the organization from people contemplating their mortality while riding out the pandemic at home. They want options, she said, so that “your last act on earth isn’t polluting it.”

The way we dispose of bodies says more about how we live. Embalming became popular in the Civil War, the first episode in U.S. history where people died en masse far from their homes and needed to be transported for burial. Cremation rates rose as the country became more mobile, and scattered families could not be convened fast enough for a burial. Today, more people seek options that don’t contribute to the environmental destruction we see around us, that allows our earthly remains to be shared by the people we loved or disposed of altogether. To embrace our final obligation, which is to return to the earth the substance that let us be ourselves.