In ‘A Heart That Works,’ the ‘Catastrophe’ star ruminates on the death of his toddler from a brain tumor 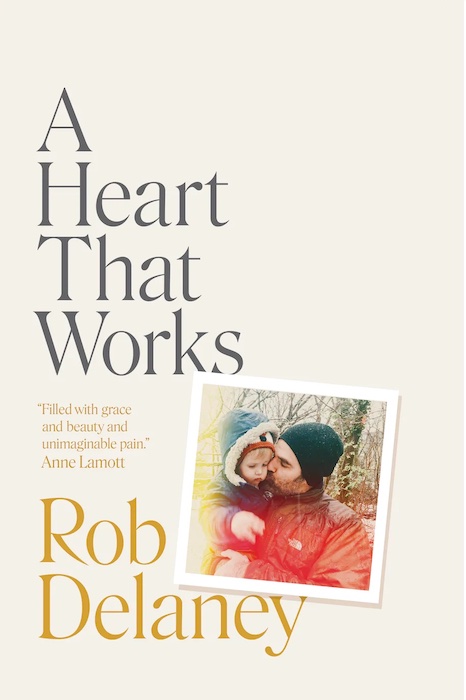 At the very top of the list of things that people say are “unimaginable” is the tragedy of one’s child dying. People don’t mean they can’t imagine it, of course, but that they will not; it would be too sad, too much. Not 10 pages into Rob Delaney’s “A Heart That Works,” a memoir of his son Henry’s life and death from brain cancer at age 2½, he insists that you do imagine it.

“If you have more than one child, it’s critical you pick one for this exercise,” he writes. “If you’re reading this, and you have a child, do it now.”

I did exactly that, because I’m a good listener, and because Delaney’s urge to have the world around him gain fluency in his pain is familiar to any griever. How can we express what it means to lose the ones we love, what their lives meant to the people in their orbit? How can we get people not just to acknowledge our pain with platitudes and sympathy cards and flower arrangements, but to feel it?

When everything happens for a reason, even the bitterest pill can be swallowed. But what meaning can possibly be assigned to a cancerous tumor growing in your baby’s brain? To watching him suffer through treatments that can only delay the inevitable? To having a permanent hole torn in the fabric of your family when there is nothing more to be done, and your toddler dies on his father’s 41st birthday?

For Delaney — blessedly — there is none. There is no silver lining to his infant son being diagnosed with a brain tumor and undergoing two years of brutal treatment, no bright side to his other sons growing up without their brother, to holding, with his wife, their son’s lifeless body. If that sounds like a bummer, well, it is — the guy’s kid died! — but to those who have felt the icy grip of grief around their own throats, it is a relief to read an account of grief that is not a series of hard-won life lessons wrapped in a gratitude journal.

There is no making sense of the senseless, and Delaney doesn’t attempt to. Instead, the comedian — best-known to my children as the dad from last year’s “Home Alone” reboot, and to most adults as the creator and co-star of “Catastrophe” — ditches a linear narrative and drags us into the chaos of real grief.

The book starts after Henry’s death and skips around in scenes that explore life before Henry’s illness, during his treatment and after his death. The result is a book that sings with life: not just Henry’s abbreviated one but the lives of the people who loved him, who love him, who will continue to love him until, as Delaney writes, they “walk through a door he had walked through.”

It’s unfair to expect grievers to emerge from the depths of loss having mined diamonds of meaning, alchemizing their suffering into a form of self-improvement. Grief, Delaney notes, doesn’t sanctify you, but in his case it appears to sharpen his vision: He spills out his shame over the workaholism that made him “a bad husband and a very, very good cog in the TV machine.”

He admits to skipping his father’s birthday celebration because, you know, doesn’t it seem a little gauche to celebrate having 70 years on this planet when your grandson had only two? These are the kinds of thoughts a person in the throes of grief often has and rarely gets to say out loud, let alone commit to the page.

After wiping tears from my face over the reaction one of Henry’s caregivers had to the news that the boy would soon die, I howled in delight at Delaney’s response to an acquaintance who wanted the Delaneys to know that his grandfather had survived the kind of brain tumor that killed Henry:

“Are you … kidding me? I wouldn’t care if your ninety-year-old grandfather got hit by three buses and then fell into a meat grinder! Grandfathers are supposed to get tumors and die! That’s their job!”

That my laughter annoyed the child whose death I had dutifully imagined earlier in the day was a bonus; I’d thought similar things when his father died of a brain tumor in 2014. That a book about a dead child is at times laugh-out-loud funny is a testament to Delaney’s skill; in the hands of a lesser writer, the humor could seem dismissive or grasping instead of the natural release valve of a person who is highly attuned to the absurdity of the awful.

Mary Oliver assured us that we do not have to be good, but Delaney shows us what that means: In the midst of your disorienting pain you can rage against the absurd and inhuman bureaucracy of modern health care; find comfort in passive suicidal ideation during scuba training (“I won’t take the regulator out of my mouth and inhale a lungful of water on purpose, but if it got knocked out by another flailing student and my own fin got caught on a drain, and I panicked and inhaled, and they couldn’t revive me — well, then that would be okay”); find comfort in your partner’s body while your child is undergoing brain surgery across the street; hate that your child is suffering and still find great beauty in the tasks associated with his care.

Grief is far more than crying, and a person is far more than their death. To share any part of Henry with the world was an act of great generosity. The depth of my own medical knowledge comes from the University of Google, but I can assure Rob Delaney that his is a heart that works.