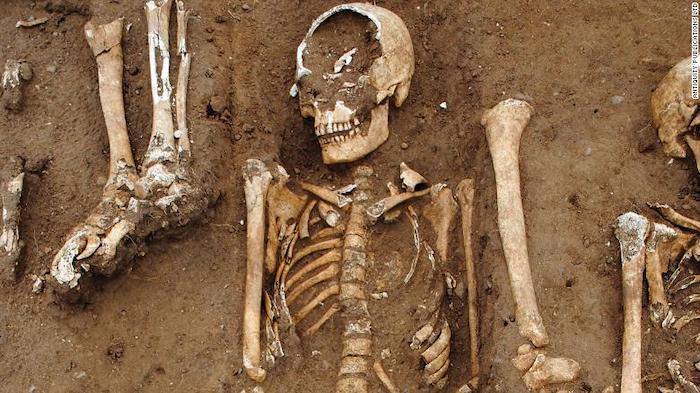 The sweeping scourge of the Black Death in 14th century England was so great it forced city-dwelling victims out to countryside hospitals, based on the tragic findings in a mass grave in Lincolnshire, England.

The remains of 48 people, including 21 children, were found at a previously unknown Black Death mass grave site at Thornton Abbey, according to a new study.

In less than two years, the Black Death claimed nearly half the lives of people in England between 1348 and 1349. Mass graves in England’s large Medieval cities have shown how overwhelmed they were. But small rural communities weren’t known to have these mass graves until now.

The 48 people in the mass grave were buried over a few days, but those at the medieval hospital attached to Thornton Abbey took the time to carefully wrap each person in a burial shroud and place them individually so they weren’t overlapping.

The study detailing the findings of the mass grave published Tuesday in the journal Antiquity.

“Later medieval Black Death cemeteries are surprisingly rare in England,” the authors of the study wrote. “The mass grave at Thornton Abbey is set apart from other 14th-century examples by its rural location and monastic association.”
The researchers believe that victims of the Black Death fled the overcrowded cities and overwhelmed hospitals there, only to die at the abbey and its hospital shortly after their journey.

An analysis of the teeth recovered from 16 of the remains revealed Yersinia pestis DNA, the pathogen for the Black Death. It’s the same strain from the outbreak that affected London, based on DNA recovered from mass graves there.
And because the grave site appears to have been disturbed at some point in its history, the researchers believe the mass grave may actually be larger and contain more Black Death victims.

Thornton Abbey was founded in 1139 in the Lincolnshire countryside and did well thanks to an association with the wool trade. Henry VIII closed it during the dissolution of the monasteries in 1539, and at its height, it was one of the richest.

“Medieval hospitals were religious institutions that provided a variety of services to the needy, including assisting pilgrims, providing alms to the poor and helping the sick and dying,” the authors wrote.

Archaeologists began to survey the area in 2011 and discovered earthworks, or human-made land modifications, which they thought represented what was left after a mansion was built on the property. Instead, they began to uncover multiple human remains.

The people were aged from one to 45 years old at time of death, with many of them between one and 17 years of age when they died. And although no babies younger than 12 months were found, the researchers believe the softer remains wouldn’t have been preserved.

Monasteries also struggled as emergency areas and cemeteries opened in the larger cities. About 11 miles from Thornton, Meux Abbey monks suffered from the Black Death and 80% of them died. This may have left Thornton as one of the only local options.

“To a society that valued ‘a good death’ above all else, the universal expectation would have been for the dead to be interred individually and with full church rites,” the study’s authors wrote.

Despite the dark time for the overwhelmed monastery, the care they took with burying the dead suggests how seriously they took their duties. Based on practices at the time, mass graves were seen as a failure of the system. But Thornton provided one of the last places where people could bring their “dead and dying to receive a proper burial and hope for salvation in the afterlife.”

“Although this reflects an acute historical tragedy, it also provides hitherto unseen details about the response of a small rural community to the devastation caused by the arrival of the Black Death,” the authors wrote. “The Thornton Abbey mass grave adds significantly to an understanding of the most deadly pandemic of the last millennium to have affected Europe.”