Before you ask, no, you can’t drink your dead relatives. 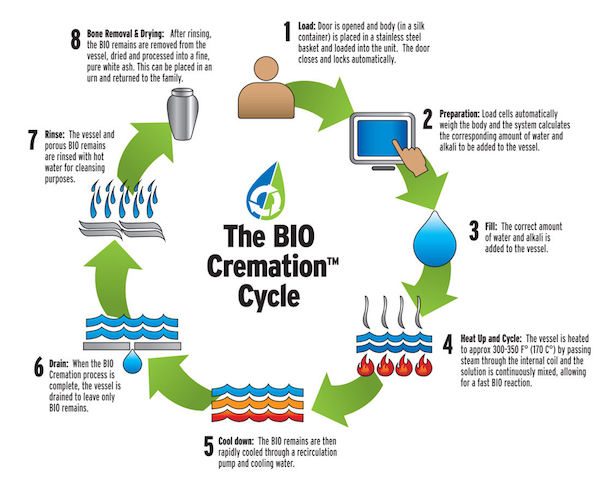 [O]n Sunday, California Governor Jerry Brown passed AB 967, an innocuously named bill for a not-so-innocuous law. The bill, proposed by assembly member Todd Gloria, a San Diego democrat, will make it legal for Californians to liquefy their corpses after death in a bath of caustic juice.

The process, referred to as water cremation (or aquamation, resomation, bio-cremation, or flameless cremation), has been proposed as a much more environmentally friendly way to dispose of a body after death. The bill is sponsored by Qico, Inc., a “sustainable cremation” company that specializes in this form of corpse disposal, and it will go into effect by at least July 1, 2020.

“A lot of people view water creation as a more respectful option and we’re glad a lot of people will be able to have it,” Jack Ingraham, the CEO of Qico, tells Inverse. “We think this is a trend for the future. I think within 10 years to 20 years, cremation will be thought of as a water-based process, and the entire flame process will be replaced.”

These days, the only mainstream options available are burial or cremation, both of which aren’t especially green; coffins take up a lot of valuable space and are made of slowly biodegrading wood, and cremation requires reaching temperatures of up to 1800 degrees Fahrenheit, which isn’t exactly energy efficient. Then there’s the option of sending a dead body to space in a rocket, which is not green, for obvious reasons.

Aquamation, in contrast, dissolves a body, DNA and all, in a vat of liquid into a relatively unharmful solution of slightly alkaline water that can be neutralized and returned to the Earth. California is the latest state to make the procedure legal, joining 14 others.

The chemical process behind aquamation is called alkaline hydrolysis, which involves sticking a body into a solution of potassium hydroxide and water that’s heated to about 200 degrees Fahrenheit, a slightly lower temperature than boiling and waiting for it to dissolve.

Potassium hydroxide, often referred to as potash or lye, is a common chemical used in manufacturing soft soap and biodiesel. Its defining quality is that it’s chemically alkaline, which means that it’s packed with oxygen-hydrogen pairs known as hydroxide groups. In strong enough concentrations, hydroxides can dissolve organic solids into liquids; it’s essentially the same process that happens when you pour Drano into a sink clogged with fat or hair.

In aquamation, raising the temperature and pressure helps the process move along faster. Usually, it takes about four hours to dissolve a skeleton. By the end of the process, the only solid thing that’s left is a pile of soft bones (potassium hydroxide won’t eat through calcium phosphate) that gets crushed into a sterile powder for family members of the deceased to take home.

As for the flesh, blood, and guts? Everything else gets dissolved into a green-brown liquid that’s slightly less basic than it was at the start of the process. What starts as a solution with a very strongly alkaline pH of 14 (the most basic possible) ends up somewhere around pH 11. Truly neutral water has a pH of about 7, so technicians sometimes add an acidic substance, like vinegar, to balance out all the excess hydroxides floating around.

It’s “what happens in a natural burial in the ground, just in a faster time frame,” Ingraham says.

The process is already a popular way to dispose of a dead pet’s body; not only is it less energy-intensive than other methods, but it also kills potentially life-threatening pathogens, like viruses, bacteria, and prions that cause transmissible spongiform encephalopathy (the type that cause mad cow disease), which aren’t always inactivated by heat.

The thought of liquefying a body is pretty weird, but California is not the first state to make it legal: Oregon, Minnesota, Maryland, Maine, Kansas, Illinois, Florida, Colorado, Georgia, Wyoming, Idaho, and Nevada have already joined the ranks of the corpse dissolution supporters. It’s something we’d better get used to in the long run. The world is running out of space, both for living and dead bodies, so it’s in our best interest to figure out what to do with all of our future corpses. Besides, if humans aren’t going to do anything good for the Earth while we’re alive, we might as well find a way to do so in death.

What’s next for aquamation in California? Ingraham says his two-year-old company expects to have their technology ready by 2019 and to be in agreement with state regulators by then as well. Meanwhile, he’s hopeful that demand will grow for this new technology that he expects will cost a little more than traditional cremation but ultimately will be set by funeral homes.

While you can’t scatter traditional ashes at Venice Beach because they’re relatively toxic — they’re ashes, after all — you won’t have those restrictions with the result of a water cremation, Ingraham says.

“When people hear about it they tend to prefer it,” he says, noting that the white “ashes” from water-based cremation can be scattered in more places.