My years as an emergency veterinarian have shown me the relief that assisted death can bring. Why are our pets the main recipients? 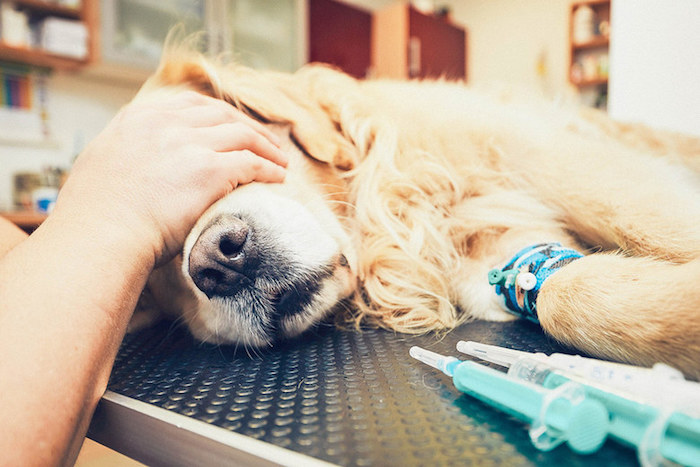 The room is dim and hushed. On the floor before me lies a shaggy bear of a dog. His name is Shep, and he’s some combination of Great Pyrenees and probably German shepherd. His owners, Anne and Rich, adopted him to guard their dairy goats from coyotes, but Shep wasn’t very good at his job and instead became a much loved house dog. I know this because I’ve been taking care of him, as his veterinarian, for his entire life. Now, as he is stretched out before me on the floor, I can see the effects of the cancer that is slowly ending his life.

Shep has osteosarcoma, an aggressive and destructive bone cancer. It starts somewhere in a long bone of the body, silently eating away at the leg until there is nothing left. The leg gives out in a painful and sudden fracture. The cancer then progresses slowly, eventually invading the lungs. Once the cancer is in the lungs, there is nothing left to be done. It is only a matter of days to weeks.

We discovered the cancer when Shep broke his leg. I had a long heart-to-heart with Anne and Rich. The typical treatment is amputation followed by chemotherapy. With that treatment, a good quality of life can be obtained for up to a year or more. There are no guarantees, of course—cancer will do what it wants. Anne and Rich spent two days deliberating the pros and cons, but since Shep was otherwise happy and healthy, they decided to amputate and pursue chemotherapy. He did great as a tripod. Often you had to look twice to notice that he was missing a leg.

That was nine months ago. Now, the chemo has stopped working, and Shep’s lungs are filled with cancer. As he lays on the floor before me, his breathing is labored. Thin, watery blood leaks from his nostrils, and he coughs occasionally. His eyes are dull, no longer the bright, shiny brown that I remember. He doesn’t enthusiastically investigate my hand for treats. His tail doesn’t thump when I softly murmur, “Shep’s a good boy.” The dog I knew isn’t here any longer. His body is a shell.

Anne and Rich are huddled on either side of him, weeping quietly. Anne runs his shaggy fur through her fingers over and over.

I shake my head gently. “No. I’m going to give him propofol to make him very sleepy, and then I am going to give him the blue injection. It will slowly stop his heart and breathing. He will drift off to sleep and then he will die. He will not feel anything,” I say. I show her the syringes again, even though we’ve already been over this. I use the word die because ambiguity is never good in these situations.

Anne takes a deep breath, looks at Rich, and then nods. It is time.

I place the Shep’s great paw in my lap, check the catheter, and slowly inject propofol. Shep’s breathing deepens, his eyes grow glassy, and his head falls to one side. I give the second injection. His breathing slows. Slows. Slows. And then it stops. Anne gives a strangled cry and lays across his still form. Rich is stoic but tears track slowly down his face. Both are focused on Shep’s body, so they miss what I see—the final gift my patients often give me. As the drugs take hold, I swear I glimpse relief in his brown eyes.

When I was a kid, I remember hearing my parents having whispered conversations about what I interpreted as “youth in Asia.” I’d be half dozing in the backseat of our car, driving through the night, the radio playing, and I would hear their low voices, the urgency with which they discussed it. At the time, I was uncertain why they were so concerned about the teen population of Japan. What did that have to do with death squads and socialized medicine? It wasn’t until years later that I realized what they were actually discussing—not “youth in Asia” but euthanasia. And it wasn’t until I became a veterinarian that I intimately understood euthanasia, the easy death. 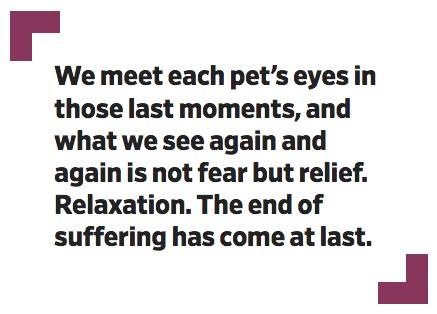 Euthanasia was a hotly debated topic for those of us who grew up in the era of Dr. Jack Kevorkian. When I was 19, Kevorkian was convicted on charges of second-degree murder for assisting in the euthanasia of Thomas Youk. Youk was in the end stages of ALS, a disease that ravages the body but leaves the mind intact.

I paid little attention to these debates back then. I was bound for college, with the world unfurling before me. But these questions came back to haunt me almost 10 years later when I started my career as an emergency veterinarian. For what do veterinarians do besides vaccinate pets and treat diseases? We ease suffering. We help our animal companions to the threshold of death, and then we help them through that final, mysterious door. We euthanize sometimes on a daily basis. We do it for reasons of behavior, illness, injury.

And as we do it, we hold the hands of distraught owners and help them make that last painful decision. We offer words of comfort and listen to sacred stories. And we meet each pet’s eyes in those last moments, and what we see again and again is not fear but relief. Relaxation. The end of suffering has come at last. I have seen it firsthand, time and time again. The wordless thank you, as a beloved pet slips into whatever awaits us in the next life. The light dims and then is extinguished. As animal physicians, we are not afraid to acknowledge that death comes for us all and that we possess the ability to ease its final agonies.