— New book explores dealing with the loss of a beloved companion 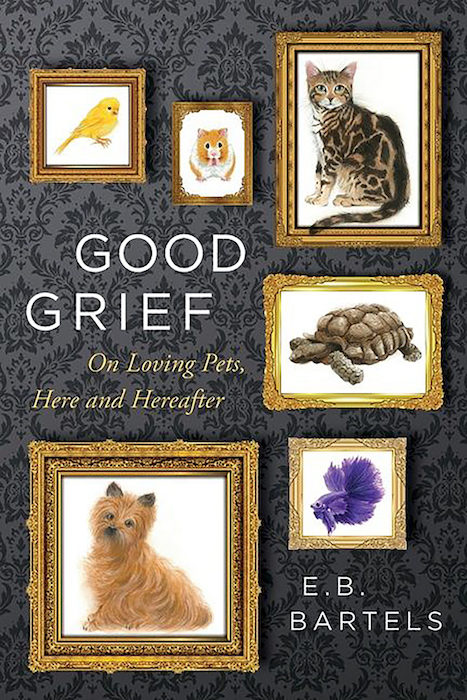 E.B. Bartels has cared for many pets in her life: Fish, dogs, birds and a tortoise. And she watched many of them die.

In her new book, “Good Grief: On Loving Pets Here and Hereafter” she explores how people mourn and grieve their animals. With her own losses, Bartels says she often diminishes her feelings by telling herself it was a only dog or a bird that died, not a human being.

“The truth is, we can have really deep, special, important relationships with animals that sometimes are even more profound than our relationships with other people,” Bartels says. “I interviewed so many people for my book who said, ‘It hit me way harder when my cat of 20 years died than when my dad who I was sort of estranged from passed away.’”

Animals love their owners unconditionally — and the loss of that acceptance can devastate people, Bartels says. And losing the physical affection from cuddling or sleeping beside a pet is a big loss when the animal is no longer around.

Even with all her research, Bartels questions why people continue adopting pets knowing this difficult goodbye is inevitable.

“Are we just masochists? Why do we keep doing this to ourselves?” she says. “There’s really something worth it. I just always think about the complete, unconditional love that our animals give us.”

For example, her beloved dog Seymour endured a tough heartworm treatment last spring that involved shots and drugs — but he never resented or witheld snuggles from Bartels and her husband.

Bartels thinks about Seymour’s eventual death on a daily basis. Prey-driven Seymour loves to chase small animals like squirrels and lunge after trucks, so on every walk, Bartels thinks he’s going to get away from her and run into the street.

“I think in some ways pets bring us so much joy because they force us to remember how short life is and how fleeting our time is together,” she says. “Even if Seymour gets hit by a car tomorrow while I’m walking him, at least we’ve had a few really special years together. And I’m really grateful for that time.”

On how to know when it’s time to say goodbye

“That is a really hard question and I wish I had a better answer. I asked every single vet I interviewed for this book that question. One of the best pieces of advice I heard was sort of the three things rule.

“A vet in Western Mass. said to think of three things that your pet loves to do. Maybe it’s swim in the lake and chase a tennis ball and loves to eat carrots. And on any given day, if your pet can still do all three or two of those three things, then your pet’s probably in pretty good shape. But if you start to notice that even the things that they absolutely love to do more than anything in the world are becoming challenging or they’re not interested in doing them anymore, then that’s when you really need to start to think about, am I holding on because I’m having trouble letting go and what’s best for my pet here? Are they in pain or are they suffering? It’s hard, though, because every animal is so different.”

On how the death of pets weighs on veterinarians

“It’s really hard for vets. I spoke to probably like 25 or 30 different [vets] for this book, and all of them brought up the really high suicide rate actually among veterinarians. All of them have lost colleagues to suicide.

“I think that’s part of why I wanted to write so much about the vet perspective in my book, to really remind people who are grieving that it’s really easy when you’re grieving and angry and upset to lash out and blame the vet, ‘Oh, you said this surgery would fix their cancer and it didn’t work and they died anyway.’ Vets are people and they’re just trying the best they can and they want what’s best for your pet, too.

“We can really be profoundly impacted by animals who aren’t our own pets, who are famous, and lots of people know and love them. Secretariat in particular came on the scene when people were going through a hard time in the United States. There was war and seeing such a joyful, successful racehorse really brought a lot of people’s spirits up. So in Lexington, [Kentucky], it was really amazing to see these whole horse cemeteries and monuments to these amazing race horses.

“One of my favorite facts is when Man of War, who is another legendary racehorse, passed away, the whole city of Lexington shut down for the day. So everyone, like kids, didn’t have to go to school so everyone could come and pay their respects to Man of War who lay in state, sort of like a U.S. president.”

On the history of humans grieving the loss of pets

“People have loved animals for millennia. My first chapter of my book is all about how in ancient Egypt, people would mummify their pets, they would bury [their pets] with them and hope to be reunited in the afterlife. There are animal mummies in Peru. There are ancient dog cemeteries in Siberia and Israel. People have loved animals for as long as they have welcomed animals into their homes and lives. And to me, if you’ve loved an animal, you also then grieve an animal. So it’s nothing new.”

“To me, the way that people mourn their pets and have these big mausoleums and statues and plots and pet cemeteries and portraits painted, it just shows to me the depth of their love and the joy that pets bring them.”