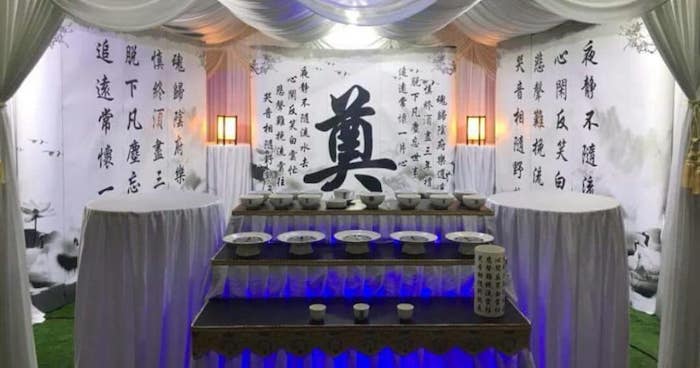 Taoists believe in concentrating more on health and longevity than on the afterlife. In Singapore, Taoist funeral services differ according to the language group of the dearly departed. The goal particularly in early Taoism was to achieve eternity, with the practice and cultivation of several tasks classified as Neidan and Waidan. Moreover, the Chinese traditionally avoid talking about death there is very little written about Taoist Funerals. Besides all, Taoist funerals becoming more simplified with each passing generation.

Taoism, for most of Chinese history, co-existed with Buddhism and Confucianism. There is therefore some influence from Buddhism in the Taoist practice of some Singaporean families. For the funeral, both Monks and Taoist Priest performing rites for the deceased during a Taoist Funeral wake.

Preparation of the Body

The first thing that happens for any death in a Taoist family, is the preparation of the body of the departed soul. Family members gathered and clean the body with a wet towel dusted with talcum powder. Afterward, they dress the deceased in their nicest clothing, usually something white, black, brown, or blue. But never use red because it could cause the deceased’s spirit to become a ghost.

After that, a yellow cloth is used to covers the face and a blue cloth covers their body before putting them in the casket. Mirrors must have coverings so no one sees the deceased’s image, as this could cause another death.

A white cloth is then placed over the doorway of the house, and a gong is placed to the left of the door for women and the right for men. A sacred ceremony also takes place before the funeral. Using a sacred lamp signifies the light of wisdom, while two candles express sunlight and moonlight. There’s also tea, rice, and water. Finally, red, yellow, green, white, and black fruit means the five elements: wood, fire, earth, metal, and water. They arrange the fruit on plates and fragrance burns in the middle.

As far as the Funeral Services Singapore is concerned, At a Taoist funeral, smells of perfume and flowers and photos of the deceased surround the area. During the service, a priest chants manuscripts while others play drums, symbols, and woodwind instruments. Then, the priest circles a fire where nine tiles rest to represent the levels of the underworld. Then the priest waves a sword to ward off evil spirits and breaks the tiles to free the deceased from the underworld.

After the burial or cremation, there’s a funeral feast with a seat left for the deceased’s spirit. Since the number eight rhymes with the Chinese word meaning good fortune, they serve eight dishes. They eat sugar water dessert first, which is a sweet soup, so it’s a sweet and happy celebration. The other dishes usually contain fish and other meat, but never beef or horsemeat.

To ward off evil spirits, everyone gets a yellow piece of paper to the funeral. The paper has their name, address, and birthday on it. Then after the funeral, they burn it in their doorway and cross over it while it burns. It says that this ritual is done to stops any spirits from chasing them home and bringing bad luck.

Also, during the funeral, everyone needs to be cautious of evil spirits. Whenever the casket is open or people move the body, everyone should turn away or may leave.

Funeral invitees give the deceased’s family a white envelope with money to help with cremation payments. However, the money amount should be odd because an even amount means immense happiness. Along with a money envelope, they also give a funeral gift. However, it should only be one gift because two gifts suggest more than one death. The deceased’s family also gives guests a traditional funeral envelope with a one-dollar coin and fruit candy.

Other than just providing the arrangements, a funeral director, experienced in Taoist Funeral practices and customs will be able to provide advice and guidance to the family to ensure their loved ones are properly honored with a meaningful and dignified funeral.

Taoist funeral ceremonies last for 3 days, 5 days, or 7 days commonly. After the burial, the ritual states that the family must have a meal for the guests who visited the funeral. Some families prefer to restrict the number of courses in this meal to the lucky number seven. Afterward, guests are offered a red packet filled with money, and everyone must burn the clothes they wore to the funeral. The funeral does not mark the end of the rituals, as families are expected to mourn for 49 days with prayers occurring every seven days.

In addition to prescribed rituals, Taoism also teaches that several actions are taboo during burial ceremonies and many other activities may have negative consequences. It is prohibited to dress the body in red clothing, as some Taoists believe it will cause the spirit to come back as a ghost. Similarly, Children and grandchildren of the deceased must not cut their hair for 49 days after the funeral. Some believe that people who see the deceased’s coffin reflected in a mirror will soon have a death in their family, and so all mirrors are removed from the house while the coffin is inside.

This is a method done by calling out the deceased’s name, in the hopes of the return of the soul, so that the loved one might be resurrected.

An act of acquiring water from Earth goddess that is usually done by the elder son, to signify the ‘letting go of earthly attachments, and to clean the deceased’s spirit for the next world to come.

Burning of Paper beside Coffin

This serves as an entry pass to go smoothly to the otherworld, where the paper is to be burnt piece by piece.

One of the main rituals includes chanting to break hell, reciting most ofutras, and asking for repentance of sins. The priests will sing songs and to bridge them the deceased to crossover from earth to heaven.

Some other Rituals in Taoism

This ritual during funeral service is done by placing items inside the casket such as the incense and joss paper to be used by the deceased on his/her journey to the other world.

The meaning of this activity signifies that the deceased have a rebirth with a better life. In the past, only the Kings or Royals family members was entitled to such practice but now they have opened it to everyone.

This belief during funeral service implies that whether spirit or human, both are equal beings. For Buddhist funeral service, the food to be offered should be vegetarian-based. For good karma, a part of the grieving process will be to avoid killing innocent animals, nor digesting meat or seafood dishes. After that, red, yellow, green, white, and black fruit symbolize the five elements: wood, fire, earth, metal, and water. They arrange the fruit on plates and incense burns in the middle.

The children and offspring are to stay awake, pray and hope that the deceased will come back to life.

For guests, a promising practice during funeral service, wait for it to come off naturally, but must remove it before entering a home.

As per the teachings of Earth Store Bodhisattva, to create merits, generous actions will be done and dedicated to the deceased in the next 49 days, to rescue them from their sufferings.

After a hundred days, the comprehensive departure from this world is ended. This is also the dateline for the completion of the tomb construction. Complete prayers are offered to the divinity overseeing the tomb.

The 1st year consists of 12 months, while the 3rd year is the 24th month of the date of death. Post-funeral ceremonies are observed to symbolize the unity of the deceased with the ancestors.

Taoists believe in focusing more on health and longevity than on the afterlife. The goal especially in early Taoism was to achieve immortality, with the practice and cultivation of various tasks categorized as Neidan and Waidan. There are many different denominations within Taoism, rites, and rituals for the deceased can differ. Taoist Funerals typically last 3, 5, or 7 days.