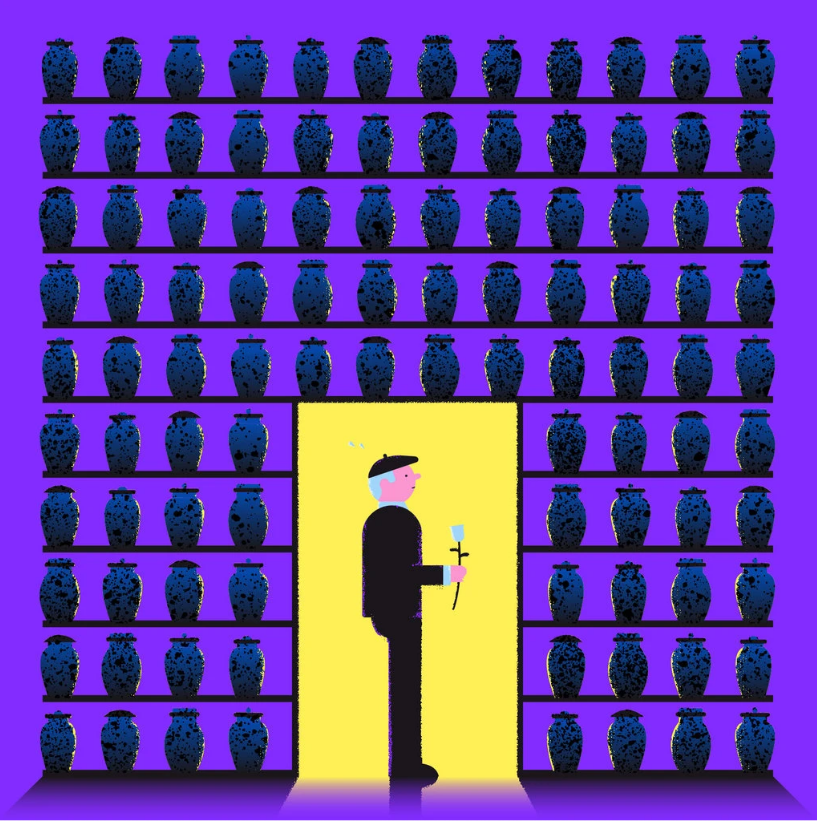 Americans are increasingly choosing cremation over burial, making it the new norm for end-of-life practices, a funeral industry report finds.

Demand for cremation — the disposal of a body using flame or heat — continues to outpace that for traditional burial, says the National Funeral Directors Association’s 2019 report on cremation and burial. The cremation rate surpassed 50 percent in 2016 and continues to increase, the association found. It is expected to rise to 79 percent by 2040.

The burial rate, meanwhile, is projected to drop to just 16 percent over the next two decades, which means that cremation “is no fading trend,” the association concluded.

Cremation is growing in popularity for several reasons, including cost, the association found. The median cost of a basic cremation — without visiting hours, a memorial service or any other trappings of a traditional burial — is about $2,400. By comparison, the median cost of a burial with a coffin and full funeral home services is about $7,400.

Cremation has generally become more culturally acceptable. The association’s research found that the proportion of people age 40 and older who feel it is important to have a religious aspect as part of a funeral has declined, to 35 percent in 2019 from about half in 2012.

Options other than standard cremation are also starting to emerge. Twenty states now permit a process called alkaline hydrolysis, according to the Cremation Association of North America, but its availability is still somewhat limited. Sometimes called “flameless” cremation, the process uses a mixture of pressurized water and chemicals to dissolve the body.

And Washington State recently approved legislation allowing “above ground decomposition,” or composting, of human remains. The resulting soil will be returned to families, just as ashes may be returned after cremation. A company called Recompose is expected to begin offering the service in Washington as soon as next year.

As cremation and other alternatives eclipse traditional burials and funeral services, funeral homes are becoming more flexible in their offerings to remain competitive. Mr. Soffe said his funeral home, for example, had arranged a service for a man who had been a Harley-Davidson enthusiast. Before the cremation, Mr. Soffe said, the man’s body was displayed for viewing dressed in his motorcycle gear.

Here are some questions and answers about cremation:

What does the price of a cremation include?

A basic cremation — called “direct” cremation by funeral homes — generally includes pickup and transportation of the body, filing necessary paperwork, the actual cremation and the return of the ashes to the family, said Joshua Slocum, executive director with the Funeral Consumers Alliance, a nonprofit advocacy group.

Some funeral homes have their own cremation equipment, but others use outside contractors. If an outside provider is used, Mr. Slocum said, consumers should be careful to review the fees to be sure they are not charged twice for similar services.

Don’t be pressured to buy a coffin. There’s no need for one if someone is being cremated, AARP advises.

The Federal Trade Commission says that no state or local law requires the use of a coffin for cremation and that the funeral home must inform you that alternative containers — such as those made of unfinished wood or even cardboard — are available.

Must I hold a memorial service before or after a cremation?

No. Add-ons like visiting hours or a memorial service are entirely up to you. “You can do everything, or nothing, before the cremation,” Mr. Slocum said. Families sometimes organize their own informal memorial gatherings after the cremation without involving a funeral home.

The federal Funeral Rule requires funeral homes to provide prices for all services, including cremation, upon request by telephone or in person. But the rule, which took effect in 1984, doesn’t address online pricing. Consumer advocates are pushing for the rule to be updated to require funeral homes to post their price lists online.

The F.T.C., which enforces the rule, was scheduled to review it this year, but whether that will happen is unclear. Earlier this year, the commission said that the 10-year review period it uses was not mandatory, and the commission could change timelines if it chooses.

A commission spokesman didn’t respond to a request for an update on the review’s status.

One state, California, requires funeral homes with websites to include pricing information online, or to list services and note that prices are available upon request.