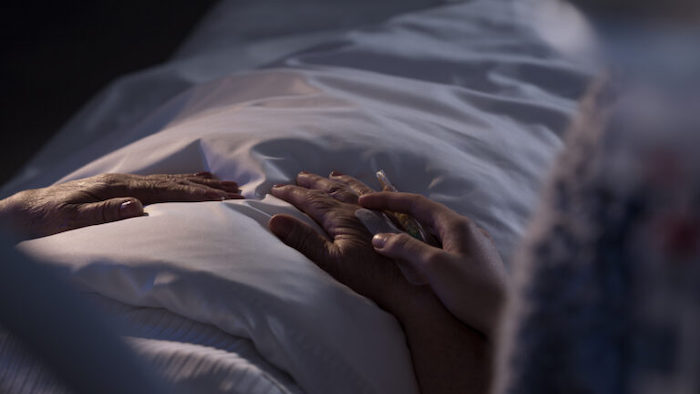 By Joel B. Zivot and Ira Bedzow

Death rattle. That’s the sound some dying people make, caused by a buildup of mucus and other secretions in the throat as the body begins to slowly lose its life force. It can sound wet and crackling, or like a soft moan or snoring or gargling.

No one knows if a dying person finds the death rattle disturbing or distressing, as no one can pretend to know with certainty the inner subjective experience of anyone too ill to express it. The common medical assumption, though, is that they are not distressed by it. But the death rattle is disturbing to family members and loved ones who are with their loved ones as they are dying. They typically interpret the sounds as indicative of pain and the absence of a “good death.”

A team of researchers in the Netherlands conducted what they call the SILENCE clinical trial to see if an injection of scopolamine butylbromide, an antispasmodic drug, could stop, or at least reduce, the death rattle. It did.

In an accompanying editorial, two U.S. physicians make the case that administering a drug to reduce the death rattle is justified, even when one cannot know the inner experience of a dying patient. They claim that “when in doubt regarding comfort, it is best to try treatment.” They also write that it can relieve the distress not of the patient but of those bearing witness to the death.

The first reason reveals a technological imperative that is permeating health care delivery. The technological imperative says, “If it’s possible, it should be done.” While moral philosophers since Immanuel Kant have held that “ought implies can” — meaning that having a moral duty entails that one is able to fulfill it — the premise doesn’t work both ways. Shooting first (in this case a subcutaneous injection of scopolamine butylbromide) and asking questions later is not the best approach. Of course, it may become best practice to reduce the death rattle, but the medical profession should at least consider why before deeming it so.

The second reason — to alleviate the discomfort of those bearing witness — speaks to the current debate over the legality and morality of capital punishment, especially now when the Biden administration wants to reinstate the death penalty for Boston Marathon bomber Dzhokhar Tsarnaev, even though earlier this year the U.S. attorney general ordered a moratorium on federal executions.

Death by execution and death in the setting of end-of-life care have something in common. Both involve the presence and witness of interested parties. And what is witnessed — rather than what is occurring to the dying individual — matters a great deal.

The law stipulates that punishment cannot be cruel and unusual. The experience of execution also confronts society’s aversion to see itself as inhumane. But the absence of cruelty does not create humaneness. Punishment must not be tortuous or deliberately degrading and should not exceed the severity of the crime committed.

The Biden administration may see execution fitting for the crime of the Boston Marathon bombing. That decision will rest with the court. Whether or not execution on its face is inhumane, it is certainly extreme and should be used judiciously — not politically.

Execution wrongly impersonates a medical act and the impersonation is so convincing that even doctors and the public are fooled. In the United States, no method of execution has ever been set aside as unconstitutional, though methods of execution have come and gone — think hanging, firing squad, and electric chair (though this last one may be coming back) — based on public perception of the outward appearance of death by execution.

Administering paralytics and other drugs may make lethal injection look more humane, even peaceful. Yet autopsies performed on individuals executed by lethal injection have shown that they suffered from pulmonary edema — their lungs were drenched with body fluids. In a self-aware person, such lung congestion would be akin to death by drowning.

Society’s opinion about what it finds to be cruel continues to evolve. But it should primarily take into account the sufferer, not those who are watching.

At the bedside of someone who is dying, families and friends are increasingly welcomed to be present, to accompany a loved one in their last moments. This is a good thing, as it returns death and dying to the realm of the home and community so people do not have to die alone. It also helps drive home that death is part of life and not something to hide away or ignore.

The danger that the SILENCE trial presents is the risk that hospitals will curate the dying experience for the sake of loved ones, just as lethal injection curates a medicalized execution for the sake of the witnesses.

If the death rattle is not painful, instead of muting it — and instead of simply paralyzing the executed — it may be better to recognize the bright line that separates the living from the dead. Mollification of observers’ experiences in both instances may anesthetize feelings regarding natural death or killing. It may also lower the bar for what constitutes facilitating death or moral killing.

As a society, we must be sure to uphold our collective humanity and alleviate suffering. But we should be focused on the suffering of the dying and not those who are watching.