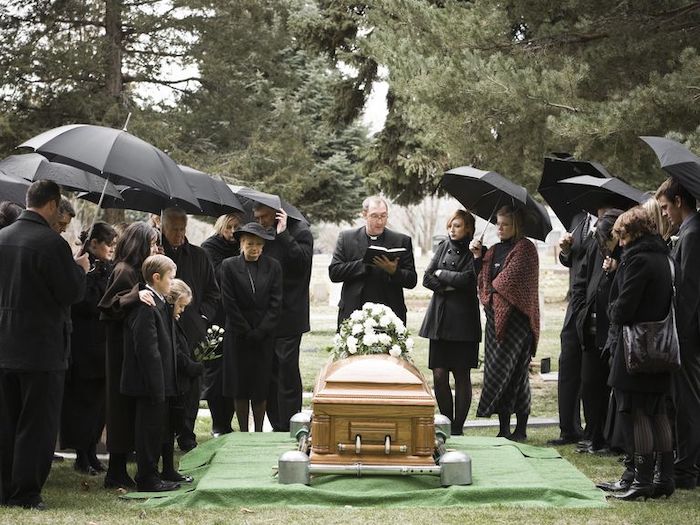 If you aren’t someone who goes to church regularly, then you might be intimidated by the idea of going to a Christian burial. However, you shouldn’t be worried. While Christian burials certainly have their rituals and traditions, most burials are accessible to secular individuals.

Every religion has its versions of a burial service. For example, a burial at a Catholic church is going to focus less on the deceased person and more on religious readings. This means that there won’t be any eulogies by friends or family.

However, you shouldn’t let that put you off Christian burials entirely.

Many Christian funerals, such as Protestant ones, are more low-key and modest. They tend to focus more on the person who is being mourned.

So if you are interested in learning about Christian burials, then keep on reading and we will take you through everything you will want to know.

What Happens During a ChristianBurial Service

A Christian burial will usually take place about one week after the death takes place. A lot of Christian families will choose to hold a wake before the actual funeral.

Christian burials all have some religious aspects, regardless of the denomination that the person followed. These rituals tend to be laid out in programs that are handed out at the beginning of the service.

If you do not attend church regularly and you are not sure what you should be doing, then just follow along with what everyone else does.

The Wake Before the Service

Wakes tend to be held a few days ahead of a funeral. However, there are some instances where they take place on the same day.

In the case of wakes that take place on the same day, the wake will usually occur in the same church as the funeral.

A lot of wakes tend to happen at a funeral home.
Christian beliefs about burial traditions and death allow for embalming. So the casket might be open at a wake. This will depend on a lot of different factors, including the wishes of the deceased and the person’s family.

If you have never been to an open viewing before, then you might be a little unsettled by the experience. It can be hard to see the person you knew and is no longer alive.

You can still attend the wake even if you do not want to go up to the casket to say goodbye or to get a better look. Instead, you can simply focus on interacting with fellow mourners in the spirit of the event.

Mourners will take seats at the burial site or in the church. After everyone has settled down, a pallbearer will bring the coffin to the gravesite.

If the deceased was cremated, then someone will come with an urn of ashes.

After this happens, a lot of Christian services will include a hymn in their program. Someone who was closed to the deceased will then read a message of hope.

This could be a piece of secular text or a passage from the bible. Whatever the text is, it is meant to honor the deceased and give hope to the people who survived them. The minister might also read a message of hope.

After, there will be a section for remembering and reflecting. The church might choose to play music.

Families will sometimes ask people to lay a flower or other item on the casket.

These kinds of burial rituals are meant to create a sense of connection to the deceased. After this reflection, another hymn is going to play to encourage everyone to go back to their seats.

The ceremony will end with everyone saying goodbye. The minister might also ask you to bow your heads while another piece of music plays. This tends to be the most emotional segment of the event.

Every religion has traditions around burials and cremations. Christian denominations aren’t any different. Christian beliefs about death will inform the burial rituals and other practices.

In a Christian burial, the body of the deceased person is usually interred in a ground that’s consecrated. Cremation used to be forbidden to Christians because it was believed that it interfered with resurrection.

However, those rules have relaxed over time. For Catholic people, cremated remains are still buried. Other Christian denominations will allow for ashes not to be interred. However, some have rules against scattering ashes.

However, if you’re wondering what does the bible say about cremation, you might be surprised to learn that it doesn’t say a whole lot.

The proper funeral attire in the United States is all black. You should dress formally with men wearing dark suits and women wearing conservative dresses. Funerals in other cultures may dress differently.

The Importance of Knowing What Happens at a Christian Burial

In the end, it is simply about respecting the traditions and mourning the deceased. If you do that, then you shouldn’t have any issues.

Are you looking for other helpful and interesting articles? If so, then check out the rest of our site today for more!