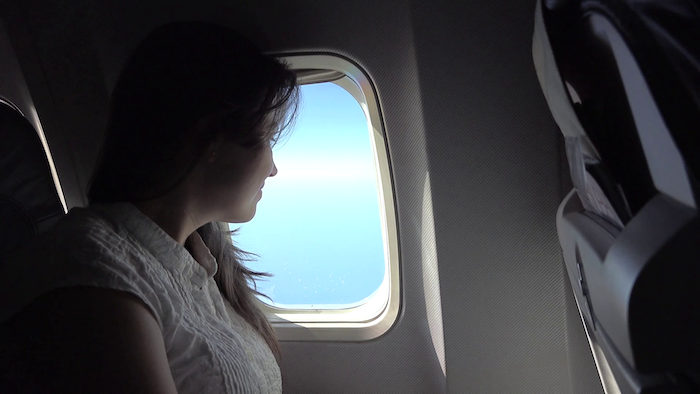 On a recent flight home after visiting family in Florida, I sat in between my two boys with my eyes closed. I knew as soon as I took out a book someone would need something so I just sat and listened. Admittedly, I enjoy people watching and conversation eavesdropping anyway.

As I listened to a woman and man in the row across the aisle, I conjured up their personal stories in my head. At first I thought they were a couple. Quickly and succinctly I realized I was wrong due to my honed in eavesdropping skills. While everyone was preparing for take off I learned that the woman was married and had two little girls. I was unable to tell if he was married, but he did have an older son. The engines whirred to life, safety demonstrations were given and my son’s ear started to bother him. Not very productive in the people watching and eavesdropping department. Things did calm down and I settled back in.

With my eyes closed, I put all my energy into listening. The background noises, however, made it difficult to hear anything other than random words mixed with the lilting of their voices. I was unable to decipher their full conversation.

The feeling was so familiar to me. It took a moment to place why the feeling was so reminiscent, but once I did it made sense. Only able to hear bits and pieces of conversations prevented me from being able to process the entirety of their stories. Much like when an individual is grieving and their brain is consumed with grief.

For the first year, at least, after losing my son my brain was on constant overload. People would speak to me and I would listen, but was only able to grasp bits and pieces of what they said. The distractions — my sadness, pain and grief — prevented me from processing in its entirety. Oftentimes at night I would dream about what I had spoken to someone about that day. The next morning I would revisit the topic with them, able to process it slightly better because my subconscious had worked it over while I was sleeping.

The concept fascinates me. My brain simply cannot handle all of the stimulation. To this day, I become overstimulated much easier than I did in the past. Multitasking is much more difficult for me. Furthermore, my dreams have always been extremely vivid but now they are so vivid I have to ask others if it really happened. These changes are undoubtedly due to the trauma.

Specialists and therapists have said that the brain is a self-healing organ. In my experience this is true. It will continue to heal, but will never go back to being what it once was. There will likely always be “airplane” conversations when I am overstimulated. The daily grief that will forever be a part of my life is not as persistently intense as it once was. When the waves of grief wash in, however, they knock me right down.

My processing abilities have changed, but so has everything else. It would be a wonder if these abilities were not affected. Healing doesn’t mean that things go back to the way they were, but rather the changes are not as intense anymore. In the nearly five years that have passed I have learned nothing if not to adapt to change.