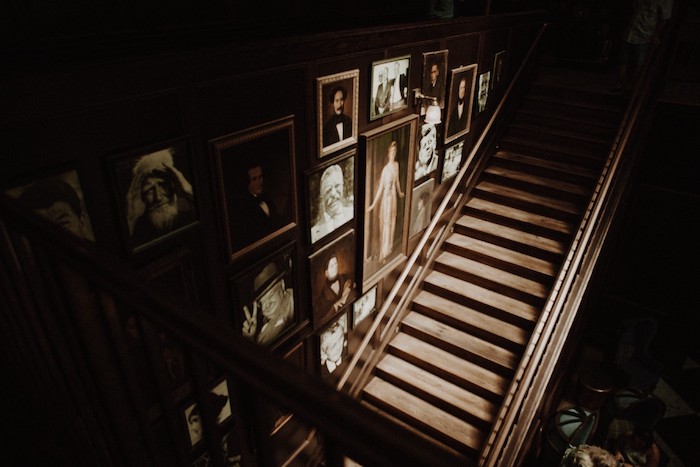 It’s a wistful image. The unknown woman seems pensive, gazing reflectively into the foreground. Her head rests upon lace, possibly her own handiwork, and behind is a shelf of small vials, the homemaker’s apothecary. She is graceful, quiet, restive.

In truth, the woman is dead.

The picture (below) was taken postmortem, her body poised under the direction of memento mori photographers using the daguerreotype processes (iodine-sensitized silvered plate and mercury vapor).

Why go through all this trouble? The nineteenth century saw a sudden and increased interest in public cemeteries and mourning rituals of all kinds (such as brooches made of human hair, complex funeral fashions), partly due to Queen Victoria’s own prominent widow’s weeds, and partly because the middle classes had means to acquire them. But it was the advent of photography that offered the best means of permanently memorializing the dead.

As a historian and author, I’ve been researching death and dying for years. My first book, Death’s Summer Coat, took a long look at our grieving rituals — and in this series, I have been re-examining those practices in light of Covid-19.

There are two images from my research into memento mori that I find particularly moving. The first is presented above. But the second wounds me with its grace, its heartfelt grief. If offers us a picture of the mother in mourning, having lost her infant child — and it offers a reminder that in the 19th century, the odds of raising your children into adulthood were dismal. Disease, poor hygiene, the absence of germ theory, and lack of vaccines all contributed to extraordinary mortality in children under the age of 5 (that is 46% or roughly 463 deaths per 1000 births).

Photography, with its use of mercury and silver, was expensive. So much so that most people never had a photo taken at all, or only on their wedding day. Imagine, then: no baby pictures. No photos of children at play, no images of holidays gone by. The human memory loses detail quickly; the context fades, then the contours, then the features of even well-beloved faces. Posing a child in death, often as though sleeping or still alive, was a means of keeping their face fresh before you — a way of remembering.

These images were not hidden away either. They would be displayed in the home, along with other features of grief. Black draped over mirrors or windows, and of course, the mourning clothes worn by those who could afford them. In our present world of rush and hurry, we are encouraged to get over our grief and come back to “normal,” understood as a state prior to loss — so great is this impulse that lingering grief is considered pathological. But for Victorians, grief was public, communal, and long lasting.

When Queen Victoria’s husband Albert died, she withdrew from public and wore black for the rest of her life. She was, in many respects, defined by her grief. It has been argued that the responsibility for making mourning ‘fashionable’ lies with her — by the height of the Victorian period, mourners were living memorials (even mourning billboards) to death.

In the first year of mourning, for instance, a widow wore black crape, a scratchy silk material that was stiff, crimped, and reflected no light. In her second year, she wore “secondary mourning,” which was still black but might be trimmed with white collars or cuffs. “Ordinary mourning” was next, again, still black, but now the fabric could be shiny — and then “half-mourning” when gray or purple was permitted.

In 1840, barrister Basil Montagu records that “in the mourning dress, the outward sign of sorrow, we call for the solace of compassion, for the kind words and looks of friends and for the chastened mirth of strangers, who, unacquainted with the deceased, respect our grief.” Walking down a city street, an onlooker might not only understand who was grieving, but in what stage of grief they happened to be.

Photographing the dead occurred at the very beginning of these stages, when the body still remained in the home — the literal funeral parlor. They would be posed, sometimes with still living children, as though still alive (sometimes with eyes open and propped into a seated position; many such photos are viewable in the Burns Archive). It inaugurated a period of intense grief, and provided a memento that would serve as the body itself was removed for burial. And yet, the practice fades and disappears by the end of the century.

Some of this is driven by the practical changes of photography; as it became less expensive, people had more living images of their loved ones to hand. But it is also true that the Victorian grief culture fell victim to the speed of life, industry, business, and changing ideas about what sort of emotions were too private the display. We are not very tolerant of grief, today. As though there is something wrong with feeling loss so keenly.

In my book, I reflected that “the modern man has lost loss; death as a community event and mourning as a communal practice has been steadily killed off.” That was 2014, and it seems a very long time ago; we’ve lived through a great deal since then, including a pandemic and mortality rates that simply cannot be ignored, screened, or hurried off

I’ve begun to wonder what we can learn from a cultural past that didn’t try to hide death — that even displayed photos of loved ones after death. Perhaps it’s time to revisit the slow process, slow like those vapor-produced daguerreotypes, taking form and changing shape and slowly coming to light

We are allowed our pain. And perhaps, if we were allowed it more publicly, we might all be kinder and gentler to each other. In my next piece for this series, I want to talk about time — taking time, having permission, and knowing that there is no wrong way to grieve.