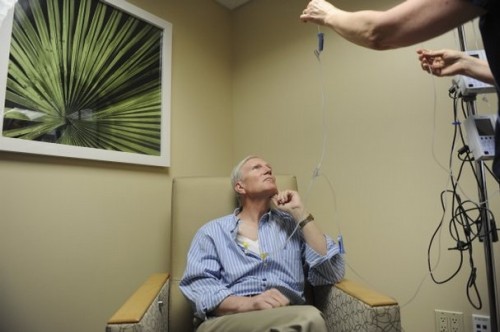 The religion professor at California Lutheran University delivers the news of the pancreatic cancer that has spread to his lungs and a prognosis he measures in months without emotion.

It’s the first thing he told two dozen students in hooded jackets and T-shirts on a January Tuesday. In the same tone he uses to discuss the interplay of science and theology, Streeter told them he made it to the first day of class at the Thousand Oaks campus. He said he wasn’t sure about the last day.

Wearing a sports coat that enveloped thinning arms, he said he would understand if they didn’t want a class that might ultimately deal with more than its title: faith and reason.

“He very matter-of-factly said how it is. Just point blank,” said Lacie Goff, a senior from Chicago. “I think I’ve thought about dying more. We’re confronted with it every Tuesday and Thursday. I think it’s good.”

Streeter is a 63-year-old theologian and ordained Lutheran pastor who does not always act like either. With silver hair and the looks of a California surfer, he plays alternative rock on a blue-violet Fender guitar. He owns a blow-dart gun from Borneo that he sometimes uses for target practice.

He taught school in Kenya, studied at Yale and met his wife of 24 years while leading a graduate class at Southern Methodist University in Dallas. He just finished a draft of a book that dismisses intelligent design as junk theology and attempts to explain how belief in God and the big-bang theory fit in the same jigsaw puzzle.

About 18 months ago, Streeter woke up in his Santa Rosa Valley home feeling as if all the energy had seeped from his body. His doctor thought he might have an ulcer. He did. It was sitting underneath a tumor the size of a golf ball.

Two days later, surgeons removed his gall bladder, his duodenum and parts of his stomach, small intestine and pancreas. They removed all the cancer they could see, but the malignancy had spread to his lymph nodes.

“I just started thinking through it: OK, you’re going to die,” he said, explaining why the news about the cancer didn’t make him bitter. “What I asked was ‘Why not me?’ People get it. Am I so special I shouldn’t?”

He decided to deal with it as another part of life, the final part. He talks about it with anyone who asks: his students, his friends, his wife, his two stepdaughters.

He hides nothing. When the woman with the lap dog in a doctor’s waiting room wants to know why a newspaper photographer would take his picture, he turns to her. “I have cancer,” he said evenly.

To those who want more, he explains how different chemotherapy drugs keep the cancer from progressing, temporarily. Then the malignancy mutates. The cancer grows.

His doctor said the toxic chemicals fed through a port in his chest every 10 days seem to be working for now. He said statistics that show how long most people survive with an incurable cancer can’t be used to predict how long Streeter will live. If they could, he’d already be gone.

“A person is never a statistic,” said Dr. Martin Palmer, a UCLA oncologist.

But because he is on his third regimen of chemo, Streeter thinks his time may be running out.

The ifs could hang in the air like a death sentence. His friends say that hasn’t happened.

“I think with his attitude and the way he has communicated with other people around him, it’s allowed us to focus on enjoying every day with him as opposed to dwelling on the loss,” Hengst said.

Susan Streeter took her husband to a Bruce Springsteen concert in December. They went on a cruise to the Caribbean in January. But he doesn’t worry much about making checkmarks on a final litany of to-dos. His bucket list is dominated by relationships.

About 150 friends from school and a Shakespeare company that he supports came to a surprise party planned by his wife. A bagpiper played. So did a rock band. People stood up and told stories. Streeter hugged everyone.

“It’s the greatest gift anyone could give you: taking the time and effort to see me,” he said.

His days are like that, too. His friends see their conversations and dinners as a chance to spend more time talking about religion, science and their love of Shakespeare. But in a sense, it’s as if his memorial service has been bumped ahead of his death.

“Sometimes, he refers to it as the long goodbye tour,” said his friend Michael Arndt. “He’s still fighting the disease and he doesn’t want to die. But he also knows he’s going to die and he’s trying to make the best of his life, every single minute.”

Perhaps the strangest thing about Streeter’s end are the words people use to describe it. Arndt said the way his friend has dealt with it has made the journey a wonderful experience to share. Streeter focuses on the chance to affirm relationships and tell people he loves them.

“I’ve had so much love poured out to me, it’s stunning,” he said. “It’s been the most fulfilling time of my entire life.”

He wants to be cremated. He wants a bagpiper to play at the beginning of his memorial service at CLU. He wants the service to end with Springsteen’s “Land of Hope and Dreams.”

But Streeter hasn’t fleshed out many of the details. He hasn’t written his obituary. Those jobs may be left for Susan Streeter, who worries something won’t be exactly the way he wants it.

“It’s important to me,” she said, focusing on the obituary. “I wonder how much detail he wants. … I don’t know.”

They met in a classroom in Dallas 26 years ago. She was the student. He was the teacher. Sometimes, she sits in his class at CLU to see him teach again.

She writes a blog that details his blood counts and the effectiveness of the latest drug. She sits beside his reclining chair in two-hour chemotherapy sessions, watching toxic chemicals drip down a plastic tube into his body.

It’s their journey. She said her part is walking down the path with him.

“It has helped give meaning for my life,” she said. “I feel like if this was the only reason for being put on the Earth, besides having my kids, of course, this is worth it.”

She has two adult daughters who play a central role in their lives. They’ve visited with both since the news of the cancer. Jarvis Streeter’s father is 91 and lives in a Thousand Oaks retirement community. He calls his son every evening just to chat, timing the calls so he can tell how the day went.

When the end comes, they’ll still be here. Streeter won’t. He and his wife say that’s the hardest part.

“I have faith enough that I will get through it,” she said. “Somehow, it will be OK, but that doesn’t mean it’s going to be easy.”