Modern burial practices are an environmental nightmare. Toxic chemicals from the embalming process leach into the air and soil. Caskets and burial vaults use a tonne of materials. And memorial parks clear acres of land while soaking up significant amounts of water and pesticides to keep lawns green.

And cremation isn’t any better. It releases noxious chemicals into the atmosphere in the process. What, then, is the most environmentally friendly way to die?

“The best way is to allow your body to feed the earth or ocean in a way that is sustainable for future generations,” Susan Dobscha, a professor of marketing at Bentley University and editor of an upcoming book about the green burial industry called, Death and a Consumer Culture, told Tech Insider via email.

And a team of two Italian designers have devised a concept on how to do that.

Their project, called Capsula Mundi, aims to create eco-friendly egg-shaped burial pods that will house a body in the place of a casket. The corpse will be placed in the fetal position within the pod and draped in a cloth of natural fibres. The team is also designing smaller versions of these pods which can inter ashes instead of a body.

The biodegradable package, which will be made from potato and corn starches, would then be plunged into the ground and a tree of the deceased’s chosing would be planted on top. Over time, the mixture of microbes and nutrients from the decaying corpse would feed the tree, effectively sprouting a new organism – the perfect circle of life. 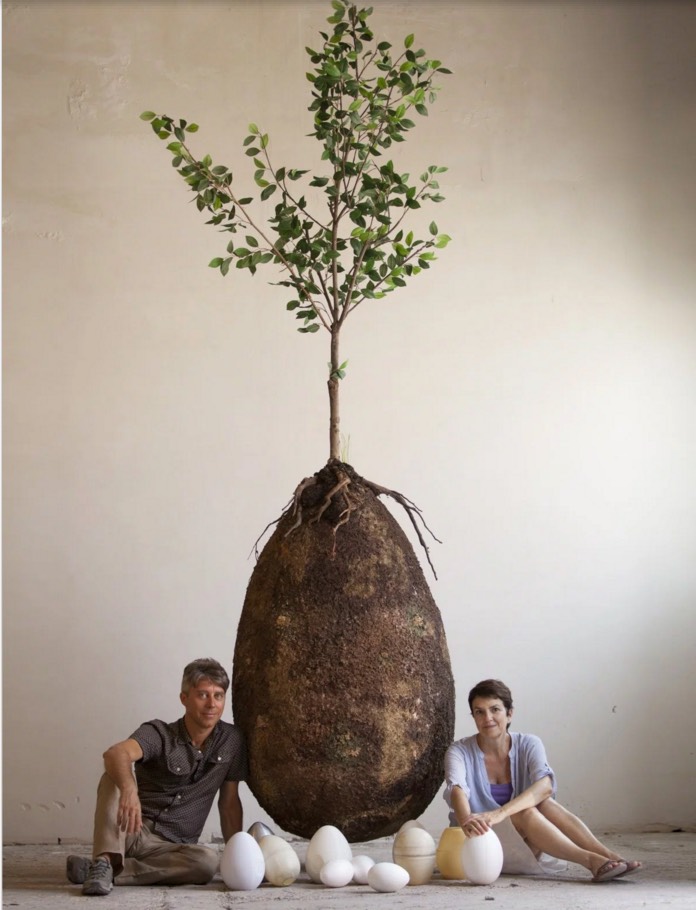 This eco-pod is the brainchild of Italian designers Anna Citelli and Raoul Bretzel, who met at a furniture fair in Milan in 2001. It is not just meant to be a work of art, but is supposed to give back to the earth in a real way that many static pieces of art do not.

It’s also meant to challenge some of the most deeply ingrained rituals and customs concerning the dead.

“Our main goal… has been to sensitise people about the unbearable way the modern culture currently deals with death,” Citelli and Bretzel told Tech Insider via email.

Though Citelli and Bretzel aren’t sure how much the capsules will eventually cost, they will likely be much cheaper than a traditional burial, which typically sets a family back an average of $US10,000 ($14,200 AUD). This includes the undertaker and cemetery fees, and costs associated with the burial vault, flowers, clothing, and transportation.

This doesn’t mean that it will be easy to revise how we honour the dead, however.

These eco pods won’t be interred willy nilly, but would be memorialised in a ‘natural burial site’ that would eventually become a forest. There are a smattering of natural burial sites across the US and other countries around the world. For example, the UK was one of the first to establish a natural burial ground, called The Woodland Burial, in 1993.

But these ‘natural’ burials – including the eco pods – are currently illegal in Italy. According to Citelli and Bretzel, Italian law states that coffins can only be made out of wood and tin, and must be buried in a protected, controlled, and closed area. They’re currently trying to change this law.

While the definition of a ‘natural’ or ‘green’ burial varies, the general idea is to allow the body to recycle back into the earth naturally. They usually forego chemical preservatives, such as the use of formaldehyde in the embalming process, or unnecessary materials, such as metal caskets and concrete burial vaults.

There are also some logistical and scientific challenges.

A vertically-lying body, like that in an eco-pod, is less likely to supply as many nutrients to the soil as a horizontally-lying one, Tony Hale, co-director of a green burial documentary A Will for the Woods, told NY Daily News. But vertical or horizontal, science suggests that humans are ripe sources of compost material, as many new burgeoning projects suggest.

Citelli and Bretzel are beginning to produce small egg-shaped capsules for burying ashes, they said, which will be ready by early 2016. The handling of ashes is generally more forgiving when it comes to the law, but different regions have their own regulations. Some countries and states within the US forbid scattering ashes on some public lands or in the ocean within 3 miles (4.8 kilometres) of a shore. Italy has not allowed scattering of ashes at all since 2001, and only permits them to be buried at a cemetery or kept in an urn in the home.

Citelli and Bretzel currently do not have a date for the body-sized eggs, though their plan is to go ahead with production despite the challenges.

“This is amazing and really pushes us forward in this project,” Citelli and Bretzel said. “This precious legacy is the gift that the person [gives] to the community and to the future.”