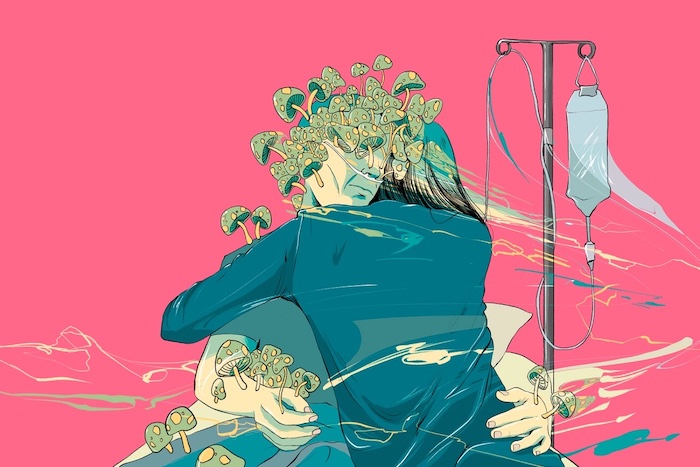 As they say, “memento mori.” The end is inevitable to all of us, but we have tools available to provide comfort—even in death. With psychedelics’ growing promise in therapies for trauma and grief, there are endless questions. Take the similarities between near death experiences and psychedelics, for instance.

End Well recently announced it will host “The End in Mind,” the largest-to-date annual virtual conference dedicated to the future of psychedelic medicines in care for people facing serious illness or end-of-life situations, taking place on October 14.

The conference will include panelists such as Melissa Etheridge as well as Dream Corps founder and political commentator Van Jones, along with a roster of healthcare, policy, culture, business and psychedelic leaders.

Conference tracks will cover psychedelic medicines and their uses—from Indigenous practices to recent clinical trials—and the current and future role of psychedelics in care for serious illness, grief and end of life. The science behind psychedelic drug development will also be pored over in detail.

The event is sponsored by Palo Santo, a U.S.-based psychedelic investment fund that recently launched with $35 million in capital raised and an active portfolio of 20+ companies. Daniel Goldberg, cofounder of Palo Santo will be among the panelists, discussing the opportunities and concerns about the future of psychedelic medicine for people seeking to improve the quality of life at the end. Goldberg founded the diversified venture fund last year with Tim Schlidt and Tony Eisenberg. He noted the variety of voices that are expected this year.

“Our panel at this year’s End Well annual symposium is made up of an interdisciplinary group of professionals that are all psychedelic medicine advocates but with very different perspectives: Dr. Jerry Rosenbaum, Director of Harvard Mass General’s new Center for the Neuroscience of Psychedelics; Dr. Julie Holland, a renowned psychiatrist and psychopharmacologist who has been an advocate in the space for decades; and Shelby Hartman, a talented journalist who founded DoubleBlind, a media business focused on psychedelics,” says Goldberg.

The conference will provide interactive breakout sessions to answer questions and provide a deep-dive into the cultural, regulatory and industry shifts. “The four of us have very different vantage points yet all of us have unique exposure to the psychedelic private sector,” Goldberg says. “We will be exploring the rapid pace of innovation happening in psychedelics and what we are most excited about (and concerned about).”

Also on the panel will be Rick Doblin, Ph.D., American drug reformist, advocate and the founder of the Multidisciplinary Association for Psychedelic Studies (MAPS) as well as Ira Byock, MD, a leading palliative care physician; and Patricia James, Cheyenne pipe carrier, among others.

The conference will also investigate the stigma attached to psychedelics. “Finally, we seem to be moving past the stigma around plant medicines,” said Etheridge, who tackled tragedy and cancer, “and into a whole new era of understanding that will hopefully enable more of us to experience the benefits of these powerful medicines—especially in the most dire times of need when we are confronting illness, grief, mortality, existential fear and death.”

The conference is also sponsored by Reset Pharma, biotechnology company Cybin, the first psychedelics company to be listed on the New York Stock Exchange; atai Life Sciences, a biopharmaceutical company aiming to transform the treatment of mental health disorders; and Microdose, a psychedelic-focused media platform.

“I’m also excited to share a bit about why our Psychedelic VC fund made a huge bet on Reset Pharma, which is developing and commercializing a novel psilocybin-based therapy to address mental health in patients with cancer and other life-threatening diseases,” Goldberg shares. “For its lead asset, the company is using the licensed research of Dr. Stephen Ross’ (NYU) seminal 2016 phase 2 clinical trial data. We believe this could help pave the way to change how we address end-of-life care as a society.”

Psychedelic medicines continue to evolve at a rapid pace. As a fund manager, Goldberg says he’s concerned when he sees valuations get bid up for certain early-stage psychedelic businesses that are based on hype. His fund, for instance, passed up on more than a few deals in the event that his scientific advisory board couldn’t get comfortable with the science—or lack of—behind some deals in the marketplace.

“We stay very focused on due diligence in order to assess a company’s ability to navigate the regulatory path and ultimately the likelihood of successful commercialization,” Goldberg says.

Based on Goldberg’s experience, not all of these psychedelic pharma startups are going to make it, regardless of the positive press they receive or the names on their board. “Clinical trials are incredibly expensive and while it might be easy for start-ups to raise $10-50 million, it’s tougher to come up with $100-300 million for trials unless you have the right product and team, as well as validating investors that have access to downstream capital,” he says.

Given that psychedelics were stigmatized for so many decades, Goldberg stressed the need for a focus on the science.

“Unless we can continue to prove safety and efficacy, doctors will be slow to move patients off of SSRI’s and give these new treatments a go,” Goldberg said. “Ultimately, we hope that patients will be able to try psychedelic therapy before being put on SSRI’s, which are hard to get off of and often have nasty side effects. Currently, psychedelics are still often viewed as a “last resort” but I believe eventually they will become the standard of care for many indications. We need that to be the case in order for insurers to get on board, which is critical as it relates to affordability.”

If we truly want to make these new drugs and treatments accessible to more people, developers need to jump through the regulatory hoops. That process has already been put into motion, for some substances. “The good news is that, even though psychedelics might have a colorful history and backstory, the FDA doesn’t really see psilocybin and MDMA any differently than amoxicillin or penicillin, in the sense that they are just drugs that have to go through the same arduous process to get approved,” Goldberg says. “In fact, because some of the ‘generic’ psychedelics, like psilocybin, have been around so long and have been proven to be safe, they have been granted ‘breakthrough therapy’ designation, which speeds up the process.”

Currently, the Palo Santo fund is invested in more than 20 businesses across the psychedelic ecosystem—with a focus on biotech and drug development. Given the range of early-stage investment, Palo Santo will have the ability to lean into the most promising companies in our portfolio and support them with downstream capital as they progress. “We are also in tech and service businesses related to the space, and we see quite a bit of cross pollination within our portfolio,” Goldberg says.

“We have a very exciting pipeline of opportunities centered around ‘2nd and 3rd generation’ psychedelic compounds,” he adds. “The innovation, accelerated by the incredible scientific talent jumping into psychedelics, is astounding. We see ample room for improvement in psychedelics and do not subscribe to the point of view that innovation is at odds with the broader psychedelics movement.”

Psychedelic experiences vary widely, especially when used improperly. There is a vast range of intentions. “I want everyone who wants to go on an expensive ayahuasca retreat to Peru to do so, but I also want safe, prescription drugs—that are reimbursed by insurers—available to those who are more comfortable with that route. We need to meet people where they are with all of this,” Goldberg says.