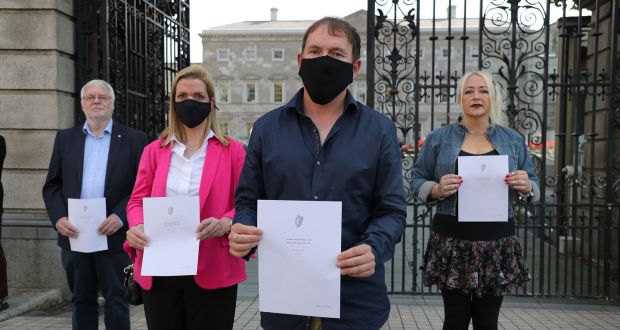 Irish society has a responsibility to offer the choice of medically assisted dying to those suffering with a terminal incurable illness, a network of 100 doctors has said.

In its submission to the Oireachtas justice committee which is considering Dying with Dignity Bill, the Irish Doctors supporting Medical Assistance in Dying (IDsMAiD) group writes that medically assisted dying can be introduced in a “safe and fair manner”. It argues that in cases of terminal illness, “patients deserve to have their choice respected”.

The Bill tabled by People Before Profit TD Gino Kenny, which seeks to legalise assisted dying, passed to committee stage last October after a vote in the Dáil.

Members of the Irish Palliative Medicine Consultants’ Association (IPMCA) have criticised the wording of the bill saying its definition of what constitutes a terminal illness is too broad.

IPMCA chair Dr Feargal Twomey said “the bill as it stands was very open to significant misuse and abuse”.

However, the IDsMAiD submission, signed by 100 doctors across Ireland, states the bill’s criteria for qualifying for assisted dying is appropriately “conservative and restrictive” and that the safeguards proposed are “conservative, balanced and fair”.

Comprehensive regulation, monitoring and reporting of assisted dying must take place if the Bill passes to ensure accountability, transparency and to foster trust in the public, says the group.

However, it argues that the “hypothetical fears” that such legislation would harm Irish society are “insufficient reason to condemn people with terminal illness to unnecessary suffering”.

While palliative care can control and alleviate the symptoms of many patients, it “cannot eliminate all pain and suffering for all patients”, states the submission. “MaiD should be seen as complementing palliative care rather than any attempt to diminish it,” it states.

The group supports the bill’s provisions which state that assisted dying would only apply to competent adults, residents in Ireland and people with a terminal illness that is “progressive and incurable”.

It notes that a person should not qualify for assisted dying on the basis of a mental illness alone and further research is required before this is considered. Legislators should follow Canada and Victoria in Australia by excluding mental illness as qualifying as a terminal illness to “eliminate any doubt or confusion on this issue”, it says.

Access to assisted dying for patients with advanced dementia remains an “evolving issue due to the need for advanced consent”, it adds.

Dr Brendan O’Shea, a Kildare GP who helped draft the submission, says assisted dying will never be relevant to most people who die in Ireland but that for a small number, it is a “vitally important” option. Dr O’Shea, assistant adjuvant professor in public health and primary care at Trinity College Dublin, said the Bill was currently “short on detail” but that he believes all missing elements would be drafted in as the legislation passes through the Oireachtas.

“We feel most strongly that details around regulation need to be discussed,” he said, adding that medical practitioners, scientific experts and the public should be consulted during the process.

Ireland should be guided by evidence from other countries who have had similar legislation in place for years, said Dr O’Shea. The Canadian model is “well-funded, well regulated and conservative in its approach” while the Dutch approach should also be carefully examined, he said.

Dr Brian Kennedy, who was also involved in the submission, says his views were shaped by his time working as a palliative care doctor. “For the vast majority it is enough and most people in most circumstances can reframe to coping with live with their illness. But there are circumstances the patient, family and healthcare workers have to deal with which are simply too terrible for all concerned.”

Dr Kennedy believes offering the choice of assisted dying to terminally ill patients would help with Irish people’s “death anxiety” and is about putting the patient “front and centre”.

In other submissions to the committee, both the Catholic Church and the Presbyterian Church in Ireland have come out strongly against measures in the Bill.

In its submission, the Catholic bishops said the Bill failed “to recognise the reality that many patients who request assisted suicide are depressed and “to require care givers to provide adequate palliative care for the terminally ill person.”

This meant “someone might decide to end his or her own life without ever having experienced what palliative care has to offer and, thus, making this decision without being fully aware of the other options available to them,” they said.

They found it “unsatisfactory” that the Bill “gives more weight to the irreversibility of the condition than to treatments which, even temporarily, relieve the symptoms. This leads to an unacceptably loose understanding of terminal illness.”

In their submission, the Presbyterian Church said the Bill would “leave vulnerable members of our society open to abuse, duress or the weight of a perceived expectation that they will relieve others of the burden of caring for them.”

Former moderator of the church Rev Dr Trevor Morrow, who had been minister at Lucan Presbyterian Church in Co Dublin for 31 years, said “our experience as pastors is that the components that contribute to a peaceful and dignified death are social, emotional, financial and spiritual. By focusing so restrictedly on the physical aspects of dying, this legislation fails to take account of these factors which can help to mitigate, or exacerbate, human suffering and distress”.