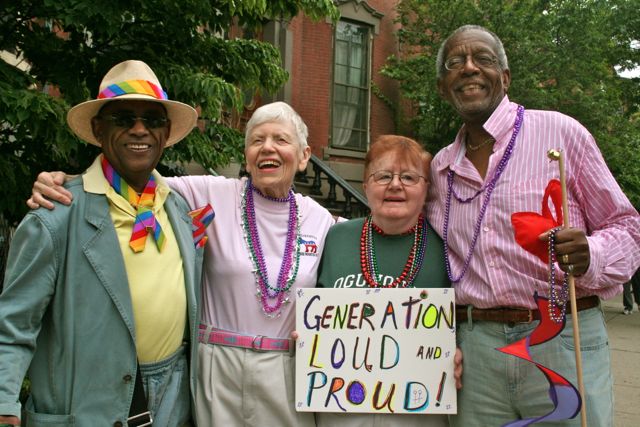 Before he met Charles Koehler—and before he married a woman, got divorced, and came out—Dennis Hostetler was a college student who needed money. In the summer of 1962 he began working in the W.R. Grace mine, cleaning the tools used to drag vermiculite ore out of the ground. The shiny, flaky mineral would be refined at the plant, and when heated, it would balloon into puffs that could insulate buildings. Libby, a town in northwest Montana, was a beautiful place, but Hostetler had bigger ambitions, so he took the $1,443.72 he’d made and got the hell out.

But pieces of Libby stayed with Hostetler, buried deep in the outer lining of his lungs. He unwittingly carried toxic mineral fibers from the mine to college in Missoula, to the Peace Corps in Tunisia, to Paris’ Left Bank, and to St. Louis, where one day, at age 67, he discovered he was dying. After experiencing fatigue, chest pain, and shortness of breath, Hostetler was diagnosed with mesothelioma, a deadly cancer probably caused by inhaling asbestos that tainted the vermiculite he mined. In 2009, a year after Hostetler’s diagnosis, the Environmental Protection Agency declared a public health emergency in Libby and initiated a massive cleanup effort that’s still ongoing. Hostetler had no illusions about what came next—he needed to put his affairs in order.

Death is an inevitable fact of life that most people prefer not to discuss. According to a 2012 survey by the California Health Care Foundation, 60% of Californians said that when they die, it’s very important to them not to burden their families with tough decisions. Despite that, more than half of the respondents hadn’t communicated their end-of-life plans with the people they wanted making decisions for them. Some were too busy with other things to think about it; others said thinking about dying made them uncomfortable. But having those conversations can make the experience better for the person dying. There’s less regret about what might have gone unsaid, and less anxiety and confusion for caregivers because they know their loved one’s wishes. Numerous studies have linked conversations about death to better, more peaceful deaths.

For members of the LGBTQ community, dying without the legal protections of a living will or power of attorney could mean spending their final days without the support of the people who love them. A 2010 study by the National Gay and Lesbian Task Force Policy Institute found that LGBTQ elders are twice as likely to live alone and four times less likely to have children than their straight counterparts. That means their caregivers are often friends, exes, or chosen family who aren’t always recognized by the medical and legal systems. “There’s no automatic protection in place to make sure that someone can choose the person that’s going to be making their [end-of-life] decisions,” says Kimberly Acquaviva, a professor of nursing at the University of Virginia who specializes in palliative and end-of-life care. “You have to put those things in writing.” Before same-sex marriage was legal, there were horror stories about families swooping in and making medical decisions that didn’t accord with people’s wishes. “Those things still happen,” she says.

A Better Way to Die

Hostetler met his partner, Charles Koehler, in 1984. While the two could never have prepared for how their relationship unfolded over the next two decades, they always had a plan for death. Before Koehler met Hostetler, he’d read the 1969 bestselling book Everything You Always Wanted to Know About Sex* (*But Were Afraid to Ask) and decided it would be better if he wasn’t gay. The book told him gay people led awful lives, an idea affirmed in an abnormal psychology class where he learned that homosexuality was in the Diagnostic and Statistical Manual of Mental Disorders.

If homosexuality was classified as a mental illness, then Koehler reasoned that it too must be a diagnosable disorder. But then Koehler actually met some gay men and realized their lives were just as varied as anyone else’s. Even then, it took years for Koehler to accept himself; when he did come out at age 27, he thought his life would remain solitary. “I had no idea what was possible,” he says. “I assumed that I would be basically closeted.” Both Koehler and Hostetler were hesitant when they met. Hostetler, who was older by a decade, had two daughters he still wasn’t out to. When Koehler moved in, Hostetler told the girls he was just renting a room. But in time they came out to Hostetler’s daughters and ex-wife.

When two of their lesbian friends asked them if they’d consider donating sperm so they could have children, both men obliged. At first the men agreed to just be “uncles” to the children, but eventually the moms wanted the boys to know who their fathers were. “We had to do DNA testing to find out who was whose,” says Koehler. “The boys were really excited for about five minutes and then they wanted to go outside and play games.” Koehler began volunteering in a program that provided support buddies to men living with HIV and AIDS. He watched a man die and then watched the man’s partner get thrown out of the home they shared. Though the house was owned by the man who died, there was no will to ensure his partner could keep it. “The family came in, took everything, kicked the kid out on the street,” Koehler says.

Afterward, Koehler and Hostetler—who were both healthy at the time—drew up documents specifying what should happen to their assets in case of death. Now, there are academics and organizations helping LGBTQ people make clear, concrete plans for death. In doing so, they’re modeling a better way to prepare for, think about, and embrace death. Sherrill Wayland, who directs operations at the National Resource Center on LGBTQ+ Aging, saw many of their older friends struggle to get the care and support they needed at the end of their lives. “It was really personal for me,” they say. “No one should die alone if they want support.” In their role, Wayland has helped create a series of guides to help LGBTQ people plan for serious illness and caregiving.

Sage USA, an advocacy organization for LGBTQ elders, is also pushing for cultural competency training in long-term care facilities. Compassion & Choices, a group that champions the importance of end-of-life planning, has LGBTQ-focused programs like Pride in a Box, which encourages people to take time during Pride Month to talk about how they want to die. These conversations can seem at once ghoulish and mundane: Do you want to be cremated or buried? Do you desire an open- or closed-casket funeral? What clothes would you like to be buried in? What pronouns should appear in your obituary? “LGBTQ people have realized that if we don’t make a plan, things are probably going to go sideways because other people won’t be looking out for us,” says Acquaviva, who helped develop an LGBTQ-inclusive curriculum for The Conversation Project, an organization that helps people discuss their end-of-life plans. “We have to figure out ways to look out for ourselves.”

Because Hostetler had an amalgamation of chosen and genetic family members, he wanted to make sure everyone was on the same page. He organized his will and called his daughters, his ex-wife, the sons, and their mothers. Hostetler was adamant that he wanted to die at home, so he arranged for hospice care. Instead of hiding his identity, Hostetler informed his health care providers that he was gay and that Koehler was his life partner and caregiver. Koehler says that without exception, every single person was supportive and respectful of their relationship.

In the final two weeks of Hostetler’s life, a hospice nurse suggested setting up his bed in the living room so he wouldn’t be alone. His eldest daughter and her family moved in and traded shifts with Koehler and a hospice nurse. His nurses provided massage and music therapy to make him more comfortable. Hostetler was sedated, hovering at the edge of their everyday routines. Finally, on New Year’s Eve 2010, his daughters and his life partner surrounded his bed and held hands as he took his last breaths. Koehler checked his pulse and said, “I think he’s gone.” Koehler describes the whole experience as peaceful. Having months to accept that Hostetler would die helped make the process less traumatizing for everyone.

“In a strange way it was both sad and yet somehow comforting at the same time knowing that he died being surrounded by us at his home, just as he wished,” Koehler says. But not all LGBTQ patients receive such affirming care: A 2020 survey published in the Journal of Palliative Medicine found that nearly one-quarter of health care providers witnessed discrimination against LGBTQ patients in palliative care settings and nearly 30% of the respondents reported witnessing discrimination against LGBTQ spouses, partners, or people whom the patient had legally designated to make care decisions for them.

Preparing for the Inevitable End

Experts like Acquaviva and Wayland say that health providers need to take time to understand the barriers that create health inequities in the LGBTQ community and undergo cultural competency training to avoid making the same mistakes. Because LGBTQ families are more likely to be families of choice, providers need to be sensitive to those dynamics and spend time learning who is part of a patient’s support system instead of automatically deferring to genetic family members. There are also simple ways to acknowledge the range of human gender and sexual identities, such as including nongendered pronouns on forms, asking for patients’ pronouns and using them correctly, and including LGBTQ-affirming language in nondiscrimination clauses.

Those steps may seem like small gestures, but they’re important signals. If an organization doesn’t commit to doing something as minimal as adding inclusive language to a statement, says Acquaviva, then it’s reasonable to expect that they won’t treat a patient with the dignity they deserve. Acquaviva has both written about and experienced this discrimination: She and her wife talked extensively about their plans when her wife was diagnosed with ovarian cancer in 2019 and ultimately decided to use hospice care to help her die comfortably. But then they discovered that none of the hospice services near their Virginia home included LGBTQ-affirming language in their nondiscrimination statements. Despite the fact that both women were experts in end-of-life care, they faced death without the support of hospice because they felt they wouldn’t receive respectful care. Acquaviva was the one managing her wife’s pain meds, bathing her, and making sure she didn’t get bed sores.

There’s no single definition of a good death. Not everyone knows when their death is coming and not every death can follow a specific plan, but every death can be expected and discussed ahead of time. “We all want to imagine we’re gonna live a really long time, and it’s human nature to imagine that everything’s gonna be OK, but the reality is 100% of us are going to die,” Acquaviva says. Have the conversation—even if it’s awkward, uncomfortable, and hard.

Now, more than a decade later, Koehler remains an active retiree. He’s single but he isn’t alone. He’s the vice president of PrimeTimers Worldwide, a large social group for older gay, bisexual, and transgender men. On Sundays he catches up with Hostetler’s daughters and their mom over Zoom, and when the younger daughter needed surgery, he helped with child care. “Having grandkids is something that I never dreamed of as even a remote possibility,” he says. “It never even crossed my mind at all.” His documents are in order and he encourages his peers to make end-of-life plans. But while he’s still here, he’s keeping busy, tending to the life and family he and Hostetler built together.