In the lobby of the hospital where I did my medical training stands a 10½-foot marble statue of Jesus. Patients and visitors often pause before the imposing figure to gather their thoughts, pray, or just touch its smooth white foot. The hospital has always been secular, but the statue has brought comfort to thousands for over a hundred years. It also reminds doctors that, in medical matters, our patients do not necessarily see us as the final authority. 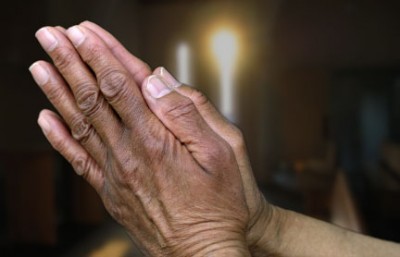 Several surveys show that over 90 percent of Americans believe in God. It’s not surprising, then, that religion plays an important role in medical care. Just as there are no atheists in foxholes, a nonbeliever might reconsider while being rolled into the operating room or waiting for a biopsy result.

The clinical efficacy of prayer is difficult to measure, though researchers have tried. In one study, strangers were instructed to pray for patients undergoing heart surgery. The prayers did not seem to improve the patients’ outcomes. Interestingly, if the patients were told they were being prayed for, they had more postoperative complications.

Still, there’s no question that prayer benefits many people. Prayer, like meditation, can lower blood pressure and anxiety and put patients in a more positive frame of mind. Even doctors like me who are not religious appreciate the element of mystery in medicine; an unexplainable force that seems, at times, to aid recovery. I was discussing this recently with a patient of mine who is a nun. She pointed out that what I call a coincidence she calls a GOD-incidence — even though we might be talking about the same thing.

On many occasions I have found myself humbled and inspired by my patients’ religious faith, even when I did not share it and even when it did not produce a cure.

One devout woman in her 50s who was dying of uterine cancer made an appointment with me to discuss what she had only identified on the phone as “plans.” I assumed she meant hospice care, DNR orders, and pain management. But what she had in mind was none of these. She told me, matter-of-factly, that she had no fear of death, that she fully expected to be reunited in heaven with her late father, and that she looked forward to this.

She did, however, have some loose ends to tie up before then, including arranging for the care of her mother, an elderly woman who was also my patient. In a very organized and business-like way she told me that she intended to move her mother in with a cousin, and enlisted my help in transferring her medical care to a physician closer to her new home — or, her next-to-last home, the one she’d inhabit before she too arrived in heaven.

I found myself full of admiration for this woman, and envious of her, too. I could not imagine having this kind of equanimity myself, faced with a hereafter about which I did not share her certainty. I had to admit that God offered her more beneficial “end-of-life counseling” than I ever could.

Another time, I found myself in a diagnostic dispute with God. A middle-aged woman developed a series of neurological symptoms. Neither I nor several specialists could determine their cause. The patient, on the other hand, was quite sure that she had chronic Lyme disease. She’d had a divine vision one night, in which the word LYME appeared in large letters. For a few years she took antibiotics continuously, prescribed by a doctor who treats chronic Lyme.

Unfortunately, her symptoms progressed, and she ultimately proved to have ALS, or Lou Gehrig’s Disease. After the woman died, I reflected that while her vision had been misleading, it had brought her hope during the last years of her life — hope that she would not have enjoyed if she’d known from the start that she had ALS.

Occasionally, even I wonder if an event can be purely coincidence.

Years ago, I headed out of town on vacation, neglecting to tell a hospitalized patient of mine that I would not see her for several days. I had arranged for one of my partners to care for her, of course, but worried about whether she would feel I’d abandoned her. This was before the era of cellphones, and the pay phone at the seaside motel where I was staying was broken. I decided that it really wasn’t necessary to call my patient and went for a walk on the beach.

By the water, coming toward me, emerging through the bright sunlight, was a man wearing a T-shirt with a single word imprinted on it: my patient’s last name. I left the beach and found another pay phone. She was doing fine, and was happy to hear from me.

My patient the nun once asked if I might visit her mother, also my patient, at home when the older woman was near the end of her life. She asked if I would draw her mother’s blood during my house call.

I was a crackerjack phlebotomist back when I was an intern, but it had been years since I’d drawn blood and told her I might be rusty. That was OK, she said. She had faith in me.

I dusted off my black doctor’s bag, threw in a needle, some tubes, alcohol wipes and a tourniquet, and headed to my patient’s house. When the time came to draw the woman’s blood, I had trouble finding a vein.

“You can stick her again if you need to,” said the daughter kindly. I confessed that I’d brought only one needle.

I adjusted the needle slightly, and a flash of red appeared. I turned to the patient’s daughter, seeking her approval. But her eyes were not on me.

They were lifted to the sky.