I hope you are following this story closely. See HERE and HERE.

Ohio Attorney General Mike DeWine says he will appeal a federal judge’s ruling that state officials must recognize the marriage of a gay couple that was performed in Maryland on the death certificate of one of the men who is terminally ill. 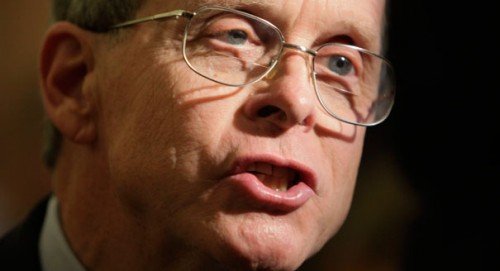 On Monday, U.S. District Magistrate Timothy Black granted a temporary restraining order prohibiting the health department registrar from issuing a death certificate for John Arthur, who is dying from amyotrophic lateral sclerosis, or Lou Gehrig’s disease, that does not list him as being married.

The death certificate must also list James Obergefell as his surviving spouse, the judge ruled.

The Cincinnati couple recently filed suit so that Arthur’s death certificate will read that he and Obergefell were married. Black, citing recent U.S. Supreme Court cases striking down anti-gay laws, ruled in favor of the couple.

But the DeWine’s office says the “definition of marriage traditionally lies with the states” and is prepared to defend Ohio’s right not to recognize the couple’s marriage, and issued this statement:

This is a temporary ruling at a preliminary stage under sad circumstances. The Ohio Attorney General’s Office will defend the right of the people of the State of Ohio to define marriage in our state Constitution. The United States Supreme Court has recently emphasized that the definition of marriage traditionally lies with the states, and Ohio’s voters are entitled to the choice they have made on this fundamental issue.

The court had rejected arguments made by DeWine’s office that the case was not an emergency, noting that Arthur’s “death is imminent.”

“Dying with an incorrect death certificate that prohibits Arthur from being buried with dignity constitutes irreparable harm,” wrote Black, in his decision.

Earlier this month, the two men flew from Cincinnati and married on an airport tarmac in Baltimore after receiving donations from friends, family and other connections to cover the cost of a $12,700 chartered, medically-equipped private plane.

The couple wants Arthur’s eventual death certificate to show his status as married, and for purposes including being able to be buried next to each other in an Arthur family plot that allows only descendants and spouses.