When you lose a parent before you come out, you grieve twice. 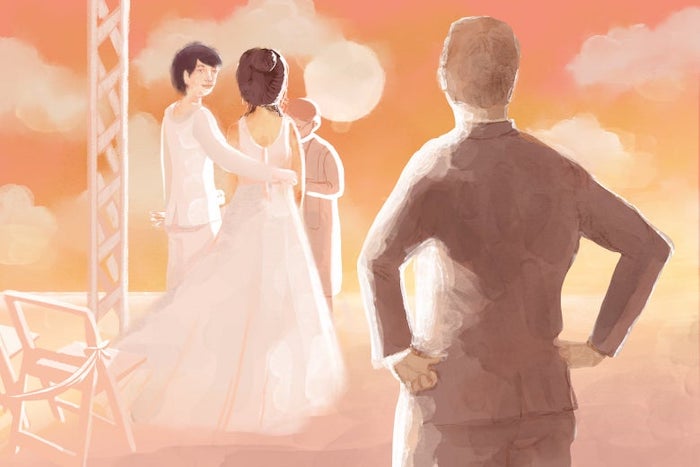 The day after I saw my dad for what would turn out to be the last time, I surprised myself and told someone I’m queer.

It was first-year move-in day at college. I had just left behind the breezes of Southern California for the 90-degree temperatures and relentless humidity of late August in New York City. Soaked in sweat but giddy, I took a break from sorting out storage bins and dorm décor to sit on the floor and get to know my three new roommates. Early into our conversation, I suddenly said, “I’m pretty sure I’m bisexual.”

I remember inelegantly shoving it into our early introductions, unprompted. To my roommates, I’m sure this brief declaration was as laid-back as the tie-dyed crop top I was wearing that day. (It said “stay rad” across it. I know.) But for me, it sparked a moment of exhilarated panic as my mother and aunt—both of whom did not know about my recent self-discovery—returned to my room. As the two of them struggled to help me organize my life in our itty-bitty shared space, I whispered from the floor: “Don’t mention what I said earlier. I’m not out to them.”

Actually, I wasn’t out to anyone, except a few close friends. My mom and sisters were largely progressive, but I had also been raised in a Catholic home and attended Catholic school through eighth grade. My father, meanwhile, was a kind of atheist, nonvoting libertarian, often hellbent on defending his own political apathy. In one of the very last conversations I ever had with him, he kept trying to press my buttons. As he drove my mother and me to the airport to begin my college journey, he shared tongue-in-cheek admiration for “our future female president”: Carly Fiorina. (This was 2015.) He laughed and I rolled my eyes, but it felt clear I couldn’t tell him what I was realizing about myself.

In the latter half of my high school years, I hadn’t quite come out to myself either. I consistently explored the now virtually nonexistent corners of queer Tumblr. (Remember #girlskissing? No?) After I used every silly, drunken senior-year Model U.N. party as an opportunity to kiss my girlfriends, my own sexual fluidity started to become a little clearer. I had come to see historically women’s colleges as queer havens (thanks, also, to Tumblr), so I chose one for myself. I decided that a journey of coming out could be safely relegated to college, and maybe—just maybe—if I got a girlfriend, I would have reasonable enough “proof” to open the conversation at home, with my mom and, somehow, my dad.

Less than two weeks after I arrived at my dorm room, my dad died of a sudden heart attack. I had just finished my first week of classes.

I emerged more fully out of the closet, but I still hadn’t come out to family. In fact, I felt like I was living a double life: one part of me idle and in mourning and the other, out. The thrill of that felt so distinct from my grieving self that it was almost as if the openly queer part of me was unburdened by my loss—so separate and distinct that my old life, and its sudden tragedy, began to feel less real.

Returning home for breaks during the school year shattered that illusion. My grief ruled me. I came to a realization: While I wanted to share my new self, my new life, with my mom and sisters, I felt a devastating relief that I wouldn’t ever have to come out to my father. I had no way of knowing how he would react, but I took comfort in knowing I’d never have to face even the slightest disapproval, criticism, or judgment from him. It was a dark kind of consolation.

Then I met my first girlfriend. I fell in love with her. I envisioned a future with her. In a few clumsy, emotional conversations, I finally shared my secret—and my relationship—with my family. They were awkward, but ultimately happy to embrace this part of me.

When you lose a parent in your teens, you immediately imagine all the milestones you’ll hit without them: graduation, a first job, a wedding, and a family of your own. But I also started to realize that my father might not even recognize me anymore, not only because of how I had aged but also because of who I’d become.

I began to have recurring dreams where he came back to life and I was tasked with welcoming him back to our world, back to our family, and to the new me. I would update him on all he had missed. It took this chimerical notion to make me rethink my relief: If any of these dreams ever took place on my wedding day, it’s possible that my father would look right past me, because I might be next to a woman.

Nearly a year later, that realization launched a kind of second mourning. I lost him first, then, later, lost the opportunity for him to ever know who I am. To know me at my happiest. I felt intense guilt and shame about the comfort I had initially taken in avoiding the conversation.

Around that time, I realized something else. I wanted to tell my most elderly family members who I was before they were gone too. This presented obstacles. My living grandfather is an octogenarian from the Middle East. My living grandmother and her sister are 92 and 100 years old, respectively. These two women live in my family’s home. They are all deeply Catholic.

Last May, my grandfather was set to visit New York City for my commencement. A few weeks prior to the ceremony, my mother mentioned to me over the phone that if my then-girlfriend would be celebrating with us, I owed him a conversation before his trip “to avoid any surprises.” Before I could gather the will, my girlfriend and I broke up, and my grandfather’s lymphoma kept him in California.

Soon it’ll have been another year since then. I still haven’t come out to any of them. I’ve worried that I’ll experience the same parallel grief when their times come. After college, I stayed on the East Coast, so perhaps I really fear being absent in the last years of their lives. Perhaps I don’t want to trouble them with an exasperated conversation in their old age. Perhaps I want to spare myself the pain of rejection.

Another part of me believes they already know. They don’t comment on my short haircut or my unshaven body hair when I’m home, and they’ve stopped asking me about my romantic prospects. Maybe there’s a mutual, unspoken understanding between all of us.

When I think back on the dark nights scrolling through Tumblr or that steamy move-in day with my quiet coming out, I look fondly on a person who was finally allowing herself to live the life she wanted. I don’t judge her for hiding before. I don’t scoff at her past fears. Instead, I respect her for waiting for the moment to be right for her.

More than a half-decade later, I’ve discovered a different side of that person. The side that accepts the person her father knew when he died. And the side that, when it comes to revealing her full self to the rest of her family’s elders, gives herself permission to be OK with what they may never know.

One Reply to “Mourning From the Closet”