Some say we’re forcing children to face issues beyond their years. But films can help make them resilient, self-aware adults 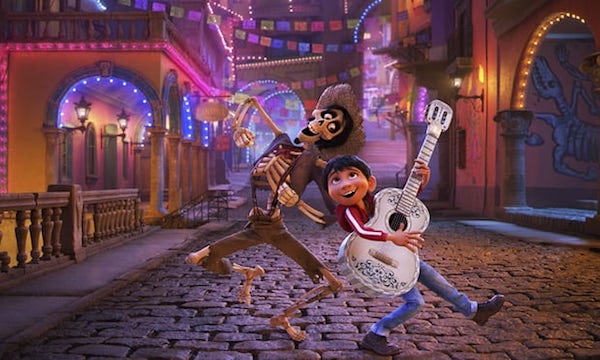 [A]t the weekend Disney Pixar’s new film, Coco, hit cinemas. It topped the UK box office and has already won a Golden Globe, so you can probably guess what it’s about. Princesses, right? Or dinosaurs, maybe.

Nope. It’s death: actual send-the-12-year-old-hero-to the-afterlife-to-meet-his-dead-relatives-type death. Set during the Mexican Día de Muertos (Day of the Dead), when people remember their departed loved ones, its core message is that those we lose live on in our memories. Speaking of memory, there’s also a character with senile dementia. Really kid-friendly stuff.

Children’s films have always had life lessons at their heart. And while most of them have traditionally sat in the positive platitudes category – work hard, be brave, do the right thing – there have been some home truths over the years, too: people are cruel (the Dumbo lesson); you’ll outgrow your childhood and its trappings (thanks, Toy Story 2).

But in recent years, as young people’s lives have become more complex and challenging than ever before, kids’ movies have stepped up, tackling increasingly tricky subjects. If there’s something you’re loth to talk to a child about, chances are there’s a film that will do it for you.

Death is one tough subject that has always been common – even if not quite as central as it is in Coco. Disney’s first heroine, Snow White, was an orphan, and they were soon offing loved ones on screen, starting with Bambi’s mum. In fact, a 2014 British Medical Journal study found that, proportionally, main characters die on screen in more children’s animated films than dramatic films for adults.

By 1994, The Lion King’s Simba was experiencing real grief, and in Toy Story 3 (2010) the heroes slid towards seemingly certain death, hand-in-hand, eyes closed, accepting. But they escaped: death was still a plot point. These days it is the plot.

If you’re thinking life can be as painful as death, modern kids’ films have got that covered too. Take the opening sequence of Pixar’s Up (2009). You know, the one that shows you how dead you are inside by how long you can last without blubbing. It charts every punishing blow of adult life from losing a baby to money troubles to repeatedly putting your dreams on hold.

In the last decade, Disney films have also turned their gaze outwards, championing society’s mistreated and marginalised. Disney’s 2013 megahit Frozen was a feminist triumph, with two kick-ass female leads and a finale centred on sisterhood. It also briefly showed what many believe was Disney’s first same-sex couple, complete with cute kids. And it opened a conversation about parental abuse. Not the overt torture of Disney’s early wicked stepmothers, but a more insidious brand that saw Elsa’s parents shame her for being different.

In 2015, Pixar’s Inside Out tackled what is often the very trickiest subject for children to understand – their own feelings. Set inside the head of a young girl struggling with life, it personified her four key emotions, and concluded that it’s actually totally fine to feel sad, something any child struggling with depression will find deeply reassuring.

And if that wasn’t grown-up enough, 2016 saw Disney release Zootropolis, an anthropomorphic comedy with a hard-hitting message about racial inclusion – highly subversive given the xenophobic political rhetoric that was rife at the time.

Some may say we’re forcing kids to face issues that are beyond their years – that we should go back to the old days where, aside from the odd bereavement, most troubles were solved with a little courage and a singsong. But times have changed, and the way children experience life has changed, too. There are new pressures, new fears, new opportunities, and the chance to mix with people whose identities and choices are, thankfully, being newly embraced by society.

Films are the perfect way for children to understand all this – not only via storylines that they can relate to but in a safe space where they can ask questions freely.

What’s more, the common reference point that films provide means that answering those questions becomes easier for parents, and a more open and honest conversation can develop. Lets face it, most kids won’t even bat an eyelid at the stuff adults worry will shock or confuse them. Kids accept the society we present to them, meaning films that normalise any and every expression of what it means to be human are a key tool in moving us towards a more inclusive society.

But perhaps most importantly of all, films can help kids cope better when life’s struggles hit them for real. They’ve already experienced some of the associated emotions vicariously. They’ve seen how the characters handle the situation. Perhaps they’ve even thought about what they’d do in the same position. If modern kids’ films can help the next generation grow into resilient, self-aware, inclusive adults, I say: keep them coming.