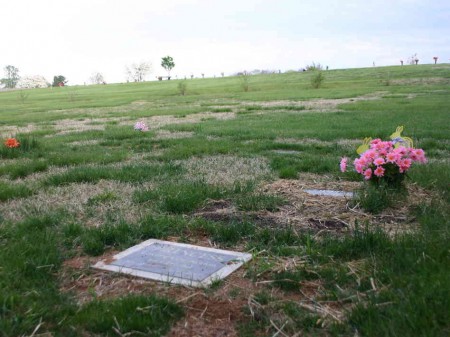 Peanut, Bootsie, Choppie, Sassy Mae. They’re a collection of names engraved into the flat stones marking the graves of dogs and cats at Mountain View Cemetery, a resting place in Vinton, Va., run by Don Wilson.

“We see people coming to visit and pay their respects and remember their pets in this section just as we do in the rest of the cemetery,” Wilson says.

Pets have been buried at Mountain View for four years now, in a section separated from human plots by a row of short, green shrubs.

Starting in July, Wilson, who runs five cemeteries, will able to designate a separate section of land in them for humans who want to be buried beside their pets.

Tom Rakoczy and his wife moved from Ohio to Virginia so they could be buried in a plot next to their 11 dogs.

“For my wife and I — our dogs, they’re our family,” he says. “Loved ones could come with two legs or four legs. And our dogs, for the last 40 years of our marriage, have been our family. We have no human children.”

Virginia joins a growing number of states, including Pennsylvania and New York, where cemeteries are allowed to create special pet-human burial sections.

The law was spearheaded here by Kelly Farris who owns a funeral service in Abingdon, Va. A few years ago, he and his family set aside some land for a future “Garden of Loyalty.”

“I think that we’re just progressive and we thought of something with the help of our clients, basically. To me it was a commonsense thing to do,” Farris says.

He currently has a waiting list of 25 people. When the law goes into effect, he can start the burials. Pets will have to be in special caskets, he says.

“Just like for humans, they’re going to have to be in an outer burial container, because we got to maintain the appearance of the graves forever,” he says. “There are pet caskets; there’s companies out there that we use that have caskets designed for different sizes of [animals]. Primarily it’s cats and dogs that we’re working with.”

In Pennsylvania, cemeteries have had separate pet-human sections for the last eight years.

Hillcrest Memorial Park, in western Pennsylvania, was the first to set up this type of cemetery, and owner Tom Flynn estimates that 80 people and pets have been buried in what he calls the “People and Pets Garden.” He says some of the pets buried here are waiting for their owners to join them. Some owners already buried here are waiting for their pets.

“People buy ahead of time so they can be buried with their pets. Some people even exchanged their lots in the cemetery for lots in the ‘People and Pets’ section. It’s over a hill; it’s probably the prettiest part of the cemetery,” Flynn says.

In Virginia, the new state law doesn’t require cemetery owners to set up a joint pet-human burial section. It merely allows them to.

Wilson of Mountain View Cemetery has no plans to create one; he doesn’t have enough land, he says. But, like most businesses, cemeteries are supply and demand.