Viewing death as unrelated to life, or antithetical it, does a disservice to the days we have, because we don’t know how to value them, says John Leland. The journalist and author explains how an elderly friend changed his perspective on the importance of acknowledging our mortality. 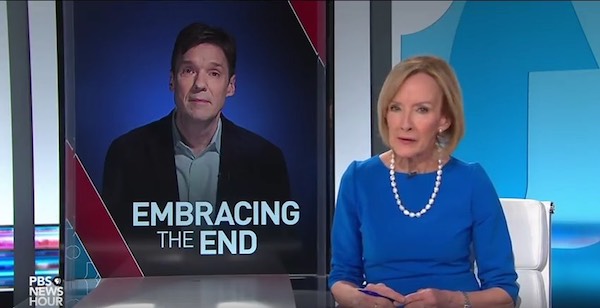 Judy Woodruff:
New York Times reporter John Leland began following a group of men and women in 2015 who ranged in age from 87 to 92.
What he learned shattered his expectations about aging and death, as he explains in his Humble Opinion.

[P]eople are always telling us to live each day as if it’s our last, but we don’t really do it, and for two good reasons.

The first is that, if you really thought today was your last day, you wouldn’t pay the utility bill or save for retirement, and, before you know it, you’re in the dark warming a can of beans over an open flame.

And the second reason is that we don’t like to think about death or dying, except as something that happens to other people.

A few years ago, I met a man named John Sorensen, who taught me how to think about death, and it changed my outlook on life. He was 91, and he missed his partner of 60 years. And every time I visited him, he said he wanted to die. He wasn’t depressed or even sad.

In fact, talking about dying always got him in a good mood. Wanting to die, for John, was the best reason to live.

And what I mean is this. He loved opera and he loved old movie musicals. And wanting to die meant acknowledging that this might be the last time he heard Jonas Kaufmann sing Wagner or watched Gene Kelly singing in the rain. This made each time more worthy of his attention.

And the same went for visits with friends. It’s a textbook economics of scarcity. His days weren’t fleeting. They were saturated with pleasures of his own choosing.

In our culture, we have come to think of death as a kind of failure of medicine or an affront to the self, rather than seeing mortality as built into all of our days, the first as much as the last.

Viewing death this way, as unrelated to life or antithetical to it, does a disservice to the days we have, because we don’t know how to value them. We enjoy a movie more knowing it’s going to end in a couple hours.

That ski run in the Swiss Alps, it’s only fun because you know there’s a bottom. The end of the run gives meaning to each curve on the way down, even when you’re still near the top of the mountain.

I have heard this acceptance of the end from most of the older people I have spent time with.

But you don’t have to wait until we’re 91 to enjoy it. We should rethink what it means to live every day as if it’s your last. The way I learned it from John, it means embracing that part of the end that exists in this moment, and then in the next.

You don’t have to quit your job or stop paying your utility bill. There’s enough to live for in the things you’re already doing. Each brush with a stranger, each moment with friends, each kiss or caress, there’s a little bit of our mortality in all of them. But their ours for now.

And that is reason to be happy.