Turning in your grave is the newest alternative to burial or cremation. 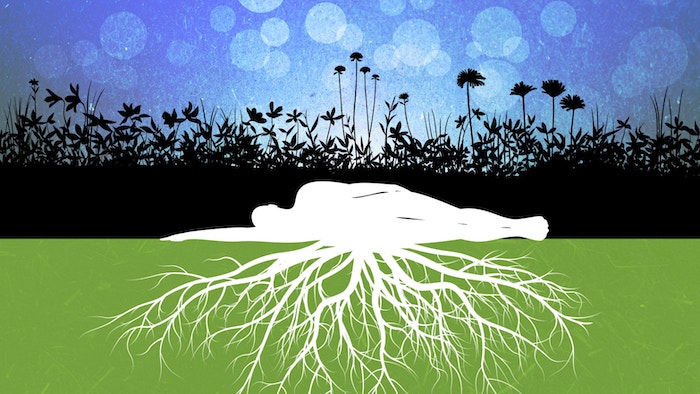 As a child of an Episcopal priest, I grew up hearing the phrase “ashes to ashes, dust to dust” at more Ash Wednesday services and funerals than I care to count. I was too busy either squirming out of boredom or trying to wipe ashes from my forehead to give the implications behind this phrase much thought.

Before my hippie parents died from their addictions in the late 1970s, they explained to me how they intended to put the spiritual concept of “ashes to ashes” into practice by choosing cremation. My teenage mind envisioned all kinds of bizarre scenarios of what I could do with their ashes, my gallows brand of humor predating Weekend at Bernies by well over a decade.

Their choice of cremation proved to be one of their few sound lifestyle choices. They made this decision because they believed this practice was more in line with their earth ethics than a commercial traditional burial. According to the Green Burial Council, annually traditional burials in the United States use approximately:

While modern traditional cremation may be less toxic, experts say the energy and emissions are equal to two tanks of gas in an average car. Simply put, that’s too much noxious residue to suit my soul. This is one road trip I’d prefer to avoid—and I decided to go a step further than my parents by giving my body back to the earth in a more natural manner.

The question was how exactly I could do that. When I turned the big 4-0, I found myself drawn to the concept of a green burial as a way to leave no trace behind when I depart. But eco-friendly burials were a service only available in select locations, and any burial expenses cost more than what I could afford to set aside. So I deferred any decisions regarding what would happen to my body after I died. After all, I was young and so far had avoided overindulging in those vices that destroyed much of my extended family.

Then COVID hit, along with wildfires impacting Portland, Oregon, where I live—not to mention the arrival of my 60th birthday. The uptick in mailings from AARP and others marketing to the “silver hairs” (sounds more upscale, I suppose, than old farts) told me I needed to make some key life decisions, including what would happen to my body upon my demise.

So I began researching natural burial options, and soon learned I am among the majority of Americans intrigued by this option. According to the National Funeral Directors Association’s (NFDA) 2022 Consumer Awareness and Preferences Report, 60.5 percent of respondents would be interested in exploring “green” funeral options because of potential environmental benefits, cost savings, or some other reason, up from 55.7 percent in 2021.

While the association supports eco-friendly burials, as NFDA spokesperson and funeral director Stephen Kemp explained, state and federal laws limit the options they can provide to families. For example, he finds the Hindu method of natural burial—where families do the cremation themselves—to be a wonderful process. “I wish we could do it like they do in India but some of the EPA rules forbid that here in the United States,” he said.

According to Kemp, the most popular request he receives from families looking for a greener burial is a natural burial in a green cemetery. I already ruled this option out as my estranged family has no communal plot where I could rest permanently. I figured no one would bother to visit, let alone ensure my grave doesn’t get overrun with weeds, varmints, and too-horny Goth kids.

In looking over the other greener choices, the water lover in me felt drawn to alkaline hydrolysis. Practitioners say this water-based process of cremation results in over 90 percent energy savings compared to flame-based cremation. But I wondered what would then happen to my remains. Did I want them turned into stones, placed in a water-soluble urn such as a papier-mâché turtle that would be sent out to sea, or used to help create an artificial reef formation? These options looked pretty on paper but were either too impractical or way out of my price range.

As an avid hiker, fly-fisher, cyclist, and gardener, I felt a strong tug to go back into the earth as living soil. So I found myself attracted to human composting, a method of accelerated human decomposition known scientifically as Natural Organic Reduction (NOR). After this process is completed, my remains could be placed in a plantable urn or converted into soil that could be returned directly back into the earth.

When I mentioned the process of human composting to a few friends, the responses I got ranged from morbid curiosity to outright disgust, with a smattering of jokes about how my soil would provide the perfect growing conditions for cannabis plants. Undaunted, I continued my research and learned that NOR was legalized in Oregon, Washington State and Colorado, with laws under consideration in New York and California.

After weeding out some for-profit human composting centers that came off as too commercialized and cold for my spiritual sensibilities, I discovered Herland Forest, a non-profit natural cemetery located on the eastern edge of the Cascadian wilderness. For starters, their price of $3,000 was at least half of what the other outfits charged.

In my phone conversation with Senior Steward Walt Patrick, I found their philosophy towards nature in sync with my soul. He describes the difference between traditional burial practices and their practice: “Commercial death care does what it can to keep the decedent from returning to the natural world and reentering the cycle of life. In contrast, we do what we can to help the decedent become a dynamic part of the cycle of life. NOR offers a way to transition from the path one walked in life to becoming part of the larger circle of life.”

Patrick detailed the process to turn a body into soil:

An insulated coffin configured as a cradle is prepared with a layer of 80 gallons of moist wood chips, and the body is then laid in the cradle on top of the wood chips and covered with another layer of wood chips. The cradle lid is put in place and bolted down, and every few days, the cradle is rolled back and forth.

The temperature inside the cradle is monitored. As decomposition gets underway the internal temperature will climb to above 130 degrees Fahrenheit. and then slowly come down. When the internal temp falls to below 80 degrees, the initial process is complete. The cradle is then opened and the composted remains are removed, processed, and stored in 55 gallon drums.

The resulting soil is either picked up for distribution on private property or added to Herland’s living sanctuary filled with native pine, fir, and oak trees, along with non-native varieties such as chestnut, walnut, gingko, cherry, apple, and hazelnut. So I have the option of either letting a buddy grow buds with my remains so they can smoke my spirits or having hikers walk all over me now that I’m part of the PNW landscape.

This venture represents an outgrowth of the Windward Education and Research Center, which for decades has utilized forest products to transform the remains of large farm animals into nutrient-rich compost. After Washington State legalized NOR, they continued composting the remains of the animals they work with in their sustainability research. But as Patrick noted, “the change in the law just allowed us to apply the skills we’d been developing for two decades to the disposition of human remains.”

After the decomposition process is completed, the compost is the property of the family, and they can do whatever they wish with it. The photos on their website of their permaculture forest told me I’d be at home in their living sanctuary—helping to feed the native trees.

Having made the decision to participate in Herland Forest’s program, I’m filled with a sense of peace knowing I will leave behind a living and lasting legacy. More importantly, as I emerge from an extended period of isolation as a result of this global pandemic, I’m filled with an intense burning desire to connect with nature. Right now, I am ready but not eager for that time when I will become a part of the Pacific Northwest wilderness.