An excerpt from the book Exhilarated Life: Discovering Inner Happiness 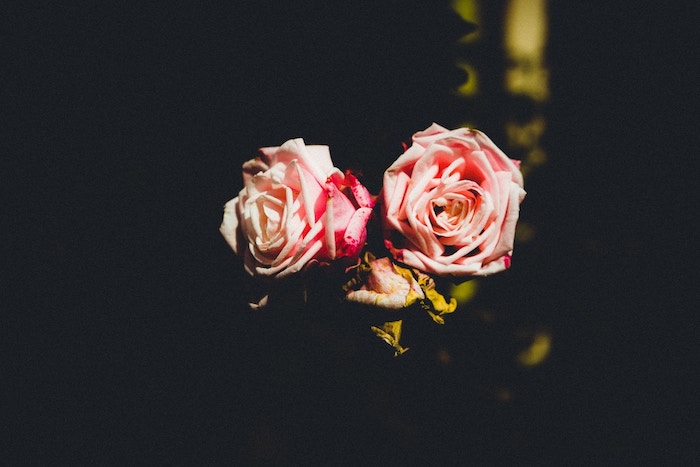 The Little Drama vs. the Big Picture.

Yesterday I made love to my home. I reclaimed her as my sanctuary. I got down on my hands and knees and actually reached under furniture, damp dusted the underside of things where the dog hair clung, carefully rewound the Christmas tree lights, dragged the tree outside, vacuumed the pine needles from under the carpet, and put the gasping poinsettias outside to “go to sleep.”

There are two significant aspects of this; one is that I normally mutter and spit through a perfunctory swiping of the floor—gathering the tumbleweeds of pet hair, and not quite reaching the corners. I usually make a joke that the maid will get the rest—but I am she…and well, you just can’t get good help these days. The second is that I am putting my home in order after the first Christmas and New Year since my beloved husband George’s death, last February.

Three weeks ago I was ready to bolt. I was going to take my sons to a beach somewhere and let the holiday roll right on past. It was my younger son who stopped me in my tracks. He said, “I don’t know why you have a problem with Christmas. Last year wasn’t our best Christmas, for sure, but this is our home and this is where we should be.” In those words and in his wise young eyes was the absolute spirit of George. It is just what he would have said. I hugged him in relief for his clarity and the three of us chose to celebrate the season by having a holiday much more joyful and healing than sad.

On Christmas Eve a year ago I knew that George was going to die. On Christmas Day at 11:00PM a 20lb turkey, stuffing and vegetables were dumped into a green garbage bag—no one could eat. At 3:00AM the day after Boxing Day, my older son, Nick, helped me maneuver George into the car, and I drove my husband to the hospital, where he stayed the week.

He wanted so much to be home for New Year’s that he was released that afternoon. We no sooner got home than we realized it was a mistake. As the clock ticked toward midnight, New Year’s Eve, George and I sat in the emergency room; George in a wheelchair, silent and still, enduring God knows what kind of pain, and me breathing and praying.

Our two sons, aged twenty and seventeen, were out at celebrations. I wouldn’t call them until after midnight to tell them I had brought their dad back to the hospital. They had been so relieved when he had been allowed to come home just that afternoon.

But wait, that isn’t the point of this story.

That part is the Little Drama as opposed to the Big Picture, as I havecome to view Life over the past several years. My good friend calls it the “Epic Story.” Like the Iliad. The one that is truly our path to God, which in my view is manifest in self-actualization, the path of love seeking love.

It is the divine blueprint of All That We Can Be. That path leads us right through the minefield of the small self with all its fears and rages, and life and death dramas, to our Greater Self—the poet, teacher or leader who resides in the heart of God or divine creation.

Here there is no death. Or rather death has no “sting.” There is only love—in its many and glorious forms. As we are birthed into this world, live and sooner or later die out of this world, we can be carried through our darkest nights on the grace of this knowing, or be badly bruised on the harshness of a “real” and physical world.

It actually becomes a conscious choice over which only we have control. I cannot trivialize the illness and death of my husband, the father of my sons, my business partner, mentor, lover, and soul mate. “George and Marilyn” was a phrase. For twenty-seven years we worked together, played together, had lunch together, shopped together, and on the way home in separate cars chatted on our cells to one another. We always had something to talk about. We rarely argued. We loved one another deeply and always wanted what was best for the other. We were only ever apart three or four times in more than a quarter century.

Was I afraid? Yes, I was terrified. I look back and realize I had bargained with God and offered to endure years of a million daily fears in exchange for the One Big One.

Was I sad? Yes, many nights I lay on our bedroom floor and wailed in the middle of the night, mindless in sorrow.

Was I angry? You bet. I hated the arrogance of doctors, the soullessness of CAT scans, the iniquity of the body. I was bloody outraged that my husband was to die. I wasn’t ready!

Did I suffer? In the sleepless nights and the numbed out days when I couldn’t fix what was broken, yes.

But so what? It all happened anyway—whether I liked it or not.

What emerged from the depths of my experience were a series of lessons about life and death. Really about life, mostly. They are a mere handful of truths that will help us live life more fully, prepare for our own death more objectively and accept the death of those we love.

Death is just the context for living our life. We are all going to die, one way or another, sooner or later. We all know this but continue to act surprised or betrayed when the end befalls us or one we love. There are no untimely deaths. Cancer, car accident, or crib death is merely part of the script. We all have an exit ticket.

There is a purpose to every single human life and how we express that to its fullest is our job on this planet. To the extent that we fulfill that mandate, the easier it will be for us to let go of the physical world and give ourselves over.

There is a saying that a good life means a good death. To my mind a “good” life does not mean one of perfection—pleasing God in our flawless following of rules, but of being real in all its darks and lights and striving. When we embrace this truth, we express our divinity in being God’s hands, eyes, mouth, ears, heart—healer, artist, teacher, counselor, lover—whatever.

The irony of all this is that I live in a world of healers—spiritual, energetic, natural. A world of miracles. In fact it is my business. After we sold our company and retired, George helped me realize my dream.

In July 2005, two weeks after I opened my boutique dedicated to the healing and creative arts, George collapsed and was rushed to hospital. He had a tumor from prostate cancer that had shut down his kidneys, he needed fourteen liters of blood, and he nearly died. The oncologist refused to take him on as a patient because she said there was nothing she could do. His urologist said he wouldn’t live until Christmas (2005), and he would spend the rest of his life dependent on dialysis.

George lived another eighteen months. He did it for me and our two sons, his family, and many others whose lives he touched during that time. I thought he was going to be my poster boy for miracles. How could the husband of one in the healing world die of the nastiest of illnesses—cancer?

But George did die. And in that passing emerged a profoundly beautiful love story. For in that final walk on Earth together, George, always my protector, led me through the fire of my greatest fears, and in return, I had the privilege of looking deeply into his eyes as he passed through the veil so he would not be afraid. From that moment the life and death drama of every day fell away and I witnessed my own soul’s journey.

I have lived my life in pursuit of the spiritual. I have prayed for clarity and understanding. I was certain that as I prayed for God’s Will to be done, that if I was really good and fulfilled my guidance in building this business around living life authentically and spiritually, I would be rewarded by my husband’s miraculous cure. How else could I really interpret his illness?

As it happened, something was lost in my interpretation. When I surrendered (small ‘s’) to God’s Will, I sensed this voice saying, “Are you sure?” and I answered, “Yep, yep, yep!” because, of course, I thought I knew what that meant. But what God really meant was that I would have to go where I dreaded more than anywhere on earth—and that was to the hospital. In this case, forty-two hours in the emergency section where George, awaiting medication, rocked back and forth on his gurney in pain and I sat on an overturned barf bowl for hours on end.

God’s Will also meant that I would ultimately have to give up my beloved when in my heart of hearts I knew he could have been “healed.” This is where I learned that healing does not always mean living.

To some I have shown strength or courage, but the truth is strength comes through surrender. In surrendering to what is, we can then look to what we need to lift us up and move us through a difficult passage.

This is where I can gratefully acknowledge the cast of hundreds who helped me—and George and family—by word or deed, practice, therapy or healing to take Life in hand and really live it…to death.This is the part I want to share.

The circumstances of the Little Drama are the tools for the Big Picture and serve only as the flash cards of greater meaning and purpose.

Yesterday, I plucked some faded roses from the Christmas centerpiece on the dining table. I was about to put them in the recycling bin, but instead to honor George (who never threw flowers in the garbage), I went out on the deck and, opening each dead rose one at a time, strewed them across the snow. The crisp brown outer petals fell away in my hands, and within the bud, deep pink silken petals unfurled.

Snowflakes and rose petals swirled in the air, then cascaded to the ground and rested there. As I looked out the window and saw the graceful pattern they left, it was a message that, like the roses, there is no death—just transformation and beauty when we look through the eyes of Love.

I hope you enjoyed this excerpt from my book, Exhilarated Life: Discovering Inner Happiness.

Today, December 8th, is George’s and my wedding anniversary.

The truth of a divine plan expressed in the chapter above is illustrated now in the diagnosis of prostate cancer in my life partner, Athan a year ago, October. Rather than being devastated by the news, we see it as destiny.

How can that be? There is a miracle unfolding for a new treatment and Athan is the sole volunteer to test it.

The irony? We have spent the past seven years involved in the testing and research of the cancer fighting properties proven in the phenolic compound oleocanthal only found in olive oil.

The adventure continues and finding the love, light and lessons in every moment is what happiness is all about.