We expected Nana to die years ago. When she finally went, it was both sadder and sweeter than we were prepared for 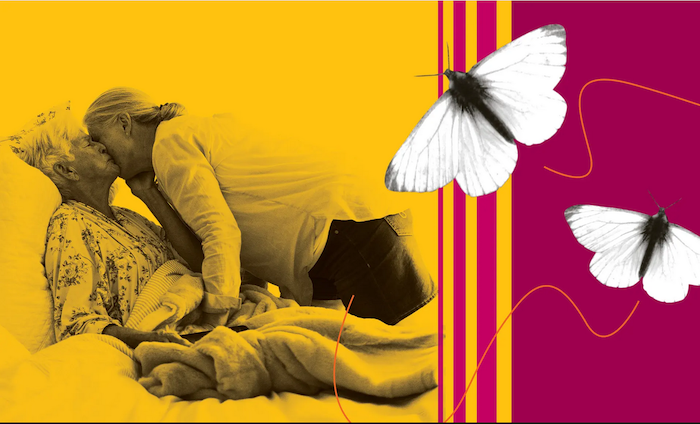 I knew it was coming; I had known it was coming for years. I had seen my friends go through it, and I had spent many hours thinking deeply about what would happen. Comforted by theories on the nature of consciousness, seduced by feasible rationales for an afterlife, sobered by the practical science of what was really going to happen, I was prepared. And then she died.

My nana had been ill for a long time. Her final diagnosis, chronic obstructive pulmonary disease, came 12 years before she died, although the prognosis was no more than four. She had come close so many times that we had started calling her “the boomerang”. But when she went into hospital for the last time, although in our heads we constructed logical expectations of her coming back to us, in our hearts we knew she wasn’t coming home.

Losing someone close to you is something you can only really talk about once it has happened. All the cliches about grief that I had heard over the years became my reality. Half an hour after she died, my cousin Elliot and I sat in the hospital coffee shop, exhausted, paralysed, silently delirious, while a tiny white butterfly fluttered around our heads, flew a full circle above us and disappeared. Over the next week, the appearance of white butterflies comforted each member of my family at different times in some ineffable way. Despite our wildly varying degrees of faith, that delicate symbol soothed us with an understanding that she was OK: whether she was on a cloud with her brothers and parents, united on an unknown spiritual plane with a greater force as part of a universal consciousness, or just gone, she was no longer in pain.

It was very sad, of course, and that is the best it was ever going to be. The reason I say “the best” is that, if it were not for the acutely careful preparations of us all, including Nana, it could have been far worse.

Palliative care should not be as taboo or scary as it is to many of us. I would go as far as to say that it is the ultimate in wellbeing practices, when a person’s health has failed and all that can be done is care. The word “palliative” comes from the Latin pallium, a cloak, and in many ways this metaphor is apt. In the last days, a “syringe driver” delivered her a steady flow of morphine and anti-anxiety drugs that concealed the worst of her symptoms, shielded her from their effects, protected her from the pain, and even hid her from death for a few more hours or days. If she had not had that, she would have died of hypoxia on the Thursday, gasping violently for breath as she drowned in carbon dioxide that her lungs were too weak to exhale. Instead, she went on until the following Tuesday, my auntie’s birthday, not before she had me write in her card: “Life is worth living because you’re my daughter.” When she finally passed, it was a moment of peace.

(Note to doctors: if it could be called anything other than a “syringe driver”, I think everyone would be much happier. My bampy (grandfather) in particular was unnerved by the name and was initially convinced that it was going to speed up her death.)

On the Saturday, when we all first expected her to go, we played her favourite songs at her bedside: lots of Maria Callas and Ella Fitzgerald, and (who knew?!) Hot Chocolate’s No Doubt About It, a song that recounts Errol Brown’s alien visitation. We were gifted the time to rejoice with her in what made her joyful, emotional and eccentric. As she appeared to slip away, our tear-stained faces fixed around her in uncontainable smiles, sure that the hour had come, she boomeranged back again, just in time for The Chase.

Memories of moments in her final days are precious and I am gratefully aware of how lucky my family and I are to have had them. They exist because of palliative-care specialists. What a mystically unique role: part scientist, part shaman; half doctor, half priest; with careful words held equally as important as the careful drugs. Never hard-heartedly functional, and never “compulsively positive”, it is as if they are of the same station as midwives, just on the other end. I am profoundly moved by this practice. The UK is reportedly the best in the world at end-of-life care, which is cause to be proud, and there are calls from both the International Association of Research in Cancer and the World Health Organization to declare palliative care a human right.

As someone whose first close bereavement was sort-of-sweet-sad but without regret, I support these proposals wholeheartedly. I wish that all people could be treated with such deep compassion and humanity. I sincerely hope that, when it is my time to die, my family and I will be helped to prepare in the same caring, tender way that my grandmother and family were in Llandough on a long weekend in July.