Here’s how to offer support to someone grieving after an unexpected death. 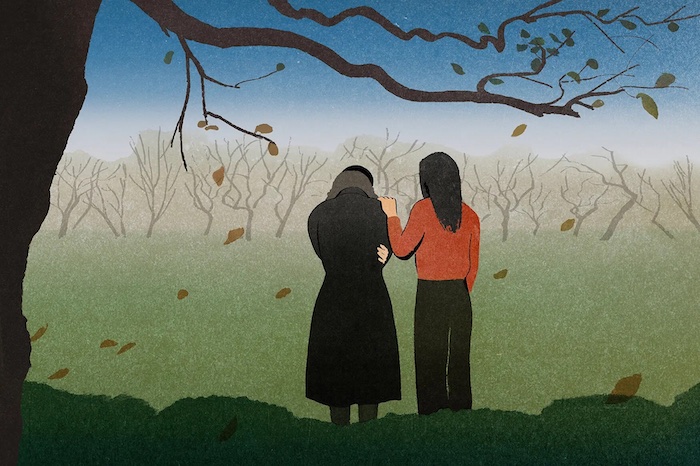 Over the past several years, the husbands of three of my friends died suddenly at the age of 50. These experiences helped educate me on how to be supportive in the face of an unexpected loss. I couldn’t imagine that I would ever be on the receiving end of such support. But that happened when I lost my son, Garrett, to suicide in September 2017.

Since Garrett’s passing, I have been amazed at the generosity of my community. One friend paid to have my home’s gutters cleaned and windows washed. Our family’s veterinarian refused to let us pay for her pet care services for a year. Another friend gave us keys to her lake house to use when we needed to get away. Each spring, we find a hanging plant on our porch from parents of a friend of Garrett’s. As brutally hard as it’s been to walk this new path without my son, these actions have provided a glimmer of positivity amid my despair.

While people have stepped up to help after our loss, such generosity is not always a given in the wake of a sudden death — an outcome that many families are experiencing with the coronavirus pandemic, which has killed more than 800,000 people in the United States alone.

“Many bereaved people experience another secondary loss when friends and family run away after a loss due to their own discomfort,” said Sherry Cormier, a psychologist and certified bereavement trauma specialist. Being present with a friend’s grief in this situation can stir up anxiety about death, she said. “They think, ‘That could happen to me.’”

Unlike a death that occurs in an older person after a long illness, with a sudden loss, “your world is turned completely and totally upside down; you’re in complete chaos,” said Camille Wortman, a professor of social and health psychology at Stony Brook University and author of “Treating Traumatic Bereavement: A Practitioner’s Guide.”

Outside of the loss itself, one of the most painful experiences for grievers is that their friends and family may not be willing to help them through their grief, Dr. Cormier said. Rather than turning away, you can offer connection. Here are some ways to help a person who has recently experienced a loss.

With a sudden loss, the bereaved find themselves immediately inundated with new and mounting responsibilities. Helping ease that burden can be invaluable. Dr. Cormier suggested leading with language like: “I’d love to help. Does anything occur to you that may be useful?” If they don’t provide suggestions, you can be specific: Ask if you can bring dinner, mow the lawn or pick up groceries. You can also provide a welcome distraction, offering to go for a walk with the bereaved or take them out to dinner.

Immediately following her husband’s death, people in her community threw a fund-raiser for medical bills and funeral costs that raised $29,000. Friends and neighbors provided meals for a month and a half. Other friends helped her take down Christmas decorations. The principal of the school where she teaches third grade even showed up to clean her kitchen.

Ms. Vance said she appreciated all the prayers after her husband’s death, but she was most buoyed by those who offered to lighten her load.

A study released in August by the American Psychological Association found that the loss of a loved one in a traumatic event can cause complicated reactions for those left behind, including prolonged grief. Other studies have found that people who have endured a traumatic loss are more likely to experience severe, intense and persistent psychological reactions, such as post-traumatic stress disorder, compared with those who have had an expected loss, according to Kristin Alve Glad, a clinical psychologist and the lead author of the A.P.A. study. In these situations, Dr. Wortman said, the bereaved can struggle for many years or decades.

“Time does not heal all wounds,” Ms. Vance said. “There are times when I feel forgotten. Everybody goes back to their normal lives, and, for us, there’s never going to be a normal life again.”

Dr. Wortman suggested checking in periodically and reaching out during times when those who are grieving may be particularly vulnerable, like a wedding anniversary or major holidays. She has compiled a list of helpful websites and articles that focus on offering support in these situations.

Consider adding simple “thinking of you” messages to your to-do list. Lisa Zaleski, who lives in White Lake, Mich., confronted the unimaginable, first losing her daughter, Sydney, in June 2017 at the age of 23 in a car accident, then her son Robert in December 2019 to suicide when he was 31 years old. After her daughter died, a friend she wasn’t especially close with sent her a text of acknowledgment every day for a year. “It felt like a tremendous amount of support,” she said.

Connect the bereaved with community support.

Nneka Njideka, a licensed clinical social worker in Brooklyn, N.Y., who specializes in grief, explained that those with more resources have “grief privilege.” They may be able to take an extended leave of absence from work and afford a team of professionals to cope with the loss, for example. But she said that isn’t the case for those who are low on resources — and people of color in particular — who, in addition to losing their loved one, may be faced with “living losses,” like unemployment or food insecurity.

Calandrian Simpson Kemp, who is Black and lives in Houston, was working the night shift at a homeless shelter for women in 2013 when she got the call that her only son, George Kemp Jr., had been shot dead at 20 years old. “Everything you envisioned for them has been stolen from you,” she said. It was too much to bear for her husband. When she broke the news to him, “he dropped his keys and never went back to work,” she said. The family, which includes her daughter and stepdaughter, became uninsured as a result. She couldn’t afford mental health care and at one point needed to use a food pantry.

“I felt that bullet was still killing my husband and I, because we lost everything that we had,” she said.

Ms. Njideka said in these types of situations, it’s important to help the bereaved network with the community and build a circle of supportive resources, perhaps to raise funds for bills and therapy. Ms. Simpson Kemp started a program, The Village of Mothers, to assist mothers who lost their children in finding the services they need.

Listen more than you talk.

It’s helpful to just sit with those who are grieving and let them cry, Dr. Cormier said. Allow them to tell you the story of their loss and don’t try to problem solve or give advice. After Ms. Simpson Kemp’s son was killed, a woman from her church offered to drive her to the cemetery and simply sat with her there.

“She would just wait in the back and allow me to be still and silent in that space with George,” Ms. Simpson Kemp said. She “showed me it was OK to slow down and put the pieces together to help make sense of what had just happened.”

Try to be mindful to avoid minimizing the loss or encouraging a quick recovery, said Roxane Cohen Silver, a professor of psychological science, public health and medicine at the University of California, Irvine. She has developed a list of “don’ts” in the event of a loss, based on her research with hundreds of bereaved people. Never suggest that you know how grievers feel, even if you’ve experienced a similar type of loss; you can’t possibly comprehend the depth of their grief, she said.

Other phrases to avoid, according to Dr. Wortman: “You’re so strong,” “You have so much to be thankful for” and “Everything will be OK,” along with religious platitudes like, “It’s part of God’s plan” or “He’s in a better place.”

Ms. Vance said it’s best not to make empty promises. Some of her friends promised her children pedicures and an outing to get ice cream, yet no one followed through. Her kids were hurt. “When you promise something, you’ve got to follow up with it,” she said.

In the case of a death by suicide, it may be even harder to know what to say or how to help, since stigma can be an issue. Doreen Marshall, a psychologist with the American Foundation for Suicide Prevention, said loss survivors often feel an incredible amount of guilt and may assume responsibility for what happened. Dr. Marshall, who lost her fiancé to suicide, said that means friends and loved ones may be even more reluctant to offer support.

As with any other type of sudden loss, focus on providing the type of support that the griever needs, Dr. Marshall said. Avoid asking about the circumstances of the death, she said, but say the loved one’s name, ask about the person’s life and share happy memories that you have.

“We miss our kids like crazy,” said Marny Lombard, when we spoke about her son, Sam, who died by suicide in 2013 at 22 years old. If Sam comes up in conversation, it doesn’t make her more upset. “When you say the name of my child, you bring me momentary joy,” she said.