— A guide from a wife who doesn’t know either 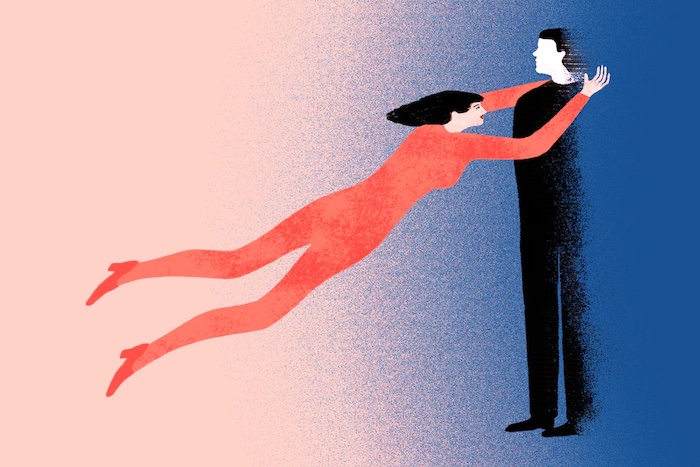 When I lost my husband to brain cancer, I learned there is no road map for grief

Since my husband, Bill, died of brain cancer in June, I’ve found myself unclear about what it means to grieve. If I’m driving our kids to school and thinking about Bill, does that count as grieving? Is watching TV to distract myself somehow an expression of grief?

When I see his eyes at night and it’s unbearable, I think, “This is grief; I am grieving.”

I am not rending my garments or wailing, but nonetheless I am a widow.

This new status felt strange at first, but then I decided it gave me license to disregard social norms and act how I wanted.

At a Girl Scouts meeting with a lot of parents I do not know, I make no effort to socialize. I just stand in a corner, not doing or saying anything. I don’t even bother to look at my phone.

I feel somehow superior to all the non-widows. I understand this might seem wrong. I’m not sure when my widow’s license expires.

What I wish I had known

Here’s what I wish someone had told us when Bill was diagnosed with glioblastoma: You just got a death sentence. You may feel optimistic because you’re young and still in good shape, and your tumor has a supposedly “good” mutation. But you have no way of knowing how much longer you’ll be alive. Wasting time now is folly.

I don’t know how this vocabulary about “fighting cancer” got started, but it’s sadly misleading. For most people, having cancer is an entirely passive experience. All you do is lie around while people carve you up, inject stuff into you, and take pictures of your body.

Then, if you die, you’ve lost the fight — almost as if there were a scenario where you could have won if you had just fought harder.

As soon as Bill’s tumor recurred, the doctors knew how this was going down. They couldn’t say, “The medical community has not yet figured out how to treat or even manage recurrent glioblastoma, so prepare to die.” But they had seen this show before, and their attitude toward Bill’s treatment became somehow more perfunctory.

We got Bill into a fancy immunotherapy trial that used a vaccine made from his cells, but I don’t think his lead doctor ever thought it was going to work. In fact, I’m pretty sure he actually said “I don’t think the vaccine’s going to work,” but he kind of said it into his elbow over Zoom, so I can’t be certain.

About five months before Bill died, this doctor and I talked on the phone, and he basically gave it to me straight. But Bill still couldn’t handle the truth, so I had to put on a hopeful face with him.

Bill died 18 months after his diagnosis. By the time the truth was unavoidable, his brain had stopped working, and it was too late to discuss it with him.

There’s a lot of driving when you have cancer

Bill always drove whenever we went anywhere. But after one of his surgeries eroded some peripheral vision, he couldn’t drive anymore.

He thought I was a terrible driver and would sit there silently fuming — often tired or in pain — as we drove to and from UCLA for his treatments. If you know Los Angeles, the drive from Pasadena to Westwood can be an absolute nightmare.

I started joking to people that the only thing worse than having brain cancer is driving from Pasadena to UCLA at rush hour. This always got a laugh.

I wonder now how long Bill would have lived without all those treatments. The question is unanswerable. But we definitely would have wasted less time stuck in gridlock on the 10.

I’ve only really cried once, in a coffee shop with a friend. I managed to get control of myself, but it made me scared to cry because I fear I would never stop.

People have advised me to let go and cry. Maybe someday I will.

People keep telling me how ‘strong’ I must be

This may come off as a “humblebrag,” but I’m really not. I am just playing the hand I got dealt, which unfortunately has recently featured caring for a dying husband along with two kids and a dog.

Not long before that — and this also feels weirdly like bragging — I survived my own serious bout with breast cancer. Also, my mother suddenly died while I was getting chemo.

Nonetheless, I have to get up every morning because my kids depend on me.

Once they’re out of the house, maybe I’ll stop being “strong” and lie facedown on the floor for, like, a year.

Now we are three

I’m still not used to our family shrinking from four to three, and I don’t yet understand how we’re supposed to live this way.

My older daughter acts like nothing happened and nothing’s wrong. My younger daughter asks me, “Mommy, are you going to die?”

Bill would always say he just wanted to stay alive long enough to see them graduate from high school. He died before they even finished elementary school.

I know that death scares people, and they don’t know what to say. Even some of my closest friends backed away when Bill was dying. Some of them said they didn’t want to bother me or feared I might be too busy.

I was busy some of the time, but other times I was just sitting in a chair waiting. Often, I screened calls because I wasn’t up for talking. But I appreciated the people who kept trying anyway and who understood that inside all the tragedy, it was still just me.

Bill and I had our favorite TV shows, like most couples, but at a certain point he could no longer see the TV or follow the plots. Neither audiobooks nor podcasts held his interest either.

The NBA finals arrived as an unexpected godsend.

Bill was a big basketball fan and was content in his recliner listening endlessly to the games. There was a group of commentators he particularly liked involving some guy named Kenny “The Jet” Smith; he got more enjoyment out of those dudes than almost anything else in his final months of life.

I kept worrying the NBA Finals would end, but they just kept going!

In the months since Bill died, there have been multiple occasions when I’ve had to decide whether to tell someone I don’t know well about his death.

Early on, it would come up in the “What have you been up to this summer?” conversations. I hadn’t really thought it through, so I would babble something like, “Well, not much, pretty low-key, I mean actually my husband died, sorry, you don’t have to say anything, anyway what have you been up to?”

These exchanges made me intensely uncomfortable, so I basically stopped talking about it.

A friend pointed out that my discomfort arose from what I perceived as being the other person’s discomfort. She said I should just tell people about Bill and let them deal with their awkward feelings.

Things I try not to think about

Caring for Bill created some moments of deep connection between us. But there were also tasks I had to perform, and he endure, that were demeaning and awful for both of us.

I try not to really think about this stuff, or about how at these times my love for him felt more like pity.

Bill died in the night. We called up the hospice people and a funeral parlor. Then I crawled up onto the rickety hospital bed in our living room and embraced him for several hours till they arrived.

I said goodbye and how much I loved him, and I feel like he heard me even though I know that’s not possible. It didn’t feel like a corpse; it still felt like Bill.

The magic of material things

The house is still filled with Bill’s clothes, law school books, shoes, electronics, records, etc. I now understand why people keep their loved one’s belongings around for years or keep their room just as it was.

The presence of all his stuff makes me feel closer to him and even sometimes lets me imagine he didn’t die at all. Maybe he will magically reappear and want to look something up in his torts textbook. If so, I will be ready.

There is so much bureaucratic stuff to deal with after your husband dies. I’m not even close to sorting it all out. It often requires sending a death certificate

Having to prove to people that Bill actually, really died feels crazy.

They all tell me they’re sorry for my loss. Not sorry enough to spare me their bureaucratic rigmarole, though.

My final words to my husband — after a conversation with his brother about Bill’s favorite actor, Paul Rudd — were “I hope you dream of Paul Rudd.” Obviously, I didn’t plan it that way — I thought we had a couple more days. He did really like Paul Rudd, though.

After we scattered Bill’s ashes in a stream in Ashland, Ore., I noticed a sign saying that this particular tributary provided drinking water for city residents. Oh, well. It was obviously too late — once again — to do anything about it.

There was also a stressful but somewhat hilarious situation involving competing meal trains that I didn’t want to find out about each other. There were some near misses, and I spent a lot of time running around hiding food.

Does this get easier?

The shock is wearing off and I’m sadder now than right after Bill died.

I think many people understand that grief is not a linear process, and so what I’m experiencing is not unusual. But I also have the feeling that people now expect me to function normally, since it’s been a while

I wonder when it will get easier, and whether that question is somehow a betrayal of Bill. I know he would not want me and the girls to suffer, but how can we not?