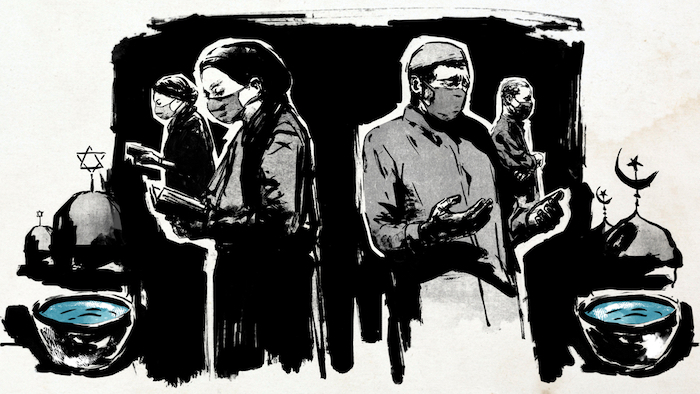 The women gently pour purifying water for the woman in the coffin. A soul on the threshold deserves the utmost care.

When the ritual concludes, the body is ready for the earth, the soul for the afterlife.

But first the women, members of a Jewish burial society in Pittsburgh, must sing a final prayer.

They press the Mute button.

On Zoom their voices refuse to ring as one, so one singer takes the lead while the undertaker, who is Catholic, wraps the body in simple white shrouds.

D’Alessandro Funeral Home & Crematory occupies a building that has cared for the deceased and bereaved in Lawrenceville, Pennsylvania, since 1897. But this — a Catholic funeral director participating via Zoom in a centuries-old Jewish tradition — is likely a first, said Dustin D’Alessandro, the mortuary’s supervisor.

But many members of the burial society are elderly and fear entering a funeral home before there is a vaccine for Covid-19, the deadly illness caused by this coronavirus. Like so many other events during this pandemic, the taharah, the name for the ritual, is performed virtually, with a bit of ingenuity and help from undertakers.

While Frank and her fellow volunteers visualize washing and drying the body, D’Alessandro walks with them through the ritual step-by-step.

“We consider them partners in what we do,” said Frank.

Ancient rituals have been forced to change

The resurgent pandemic, which has hammered the US with new urgency in recent weeks, has sent that evolution into hyperspeed.

While public health officials are still learning about how Covid-19 spreads, the CDC has said “it may be possible” that people could become infected by touching the body of someone who has died of the virus.

“We went from caring for a person’s body the way we have for four hundred years to suddenly not being able to do that anymore,” Zinner said.

The coronavirus has changed so much about how we live, it was inevitable that it would alter how we die as well. The graveside gatherings, shoulder-to-shoulder prayers, consoling hugs and timeworn rituals have been canceled or curtailed for fears of contagion.

But grief abhors a vacuum. So traditions have been adapted, as clerics turn to emergency measures prescribed in their religious laws. That’s especially true of rituals, as in Judaism and Islam, that rely on touch and intimacy with the deceased. In some instances, funeral home directors and burial societies across the country are crossing religious lines to help perform the sacred rites of passage.

D’Alessandro, who has participated in 12 burial purifications, said Frank’s society taught him about the meaning behind the rituals, imparting a sense of their importance to the living and the dead.

“I’m glad they’re allowing me to do it, despite not having a background in Judaism,” said D’Alessandro. “It’s just an incredible thing to be a part of.”

When Covid-19 raged through New York City earlier this year, Imtiaz Ahmed was proud that his was one of the few funeral homes that still offered ghusl, an Islamic purification ritual performed on the recently deceased. As in the Jewish tahara, the body is cleansed, usually by a close family member and burial expert, then dressed in simple white robes before it is buried.

It was quite a turnaround for the Pakistani-American, who used to drive a cab and was squeamish about touching dead bodies. Now, Ahmed says, he has a clear mission.

“Once Covid started I realized that I had made the right decision,” said Ahmed, 39, “because people need my help.”

But some of the employees at his Al-Rayyan Funeral Services in Brooklyn’s “Little Pakistan” neighborhood were more reluctant. Several quit, citing health conditions or fear of contagion, Ahmed said.

The Centers for Disease Control recommends taking precautions with rituals that involve touching the dead and urges funeral homes to suit up with proper protective equipment. It is not yet known whether dead bodies can transmit the disease, according to the CDC.

The Fiqh Council of North America, a group of scholars who offer opinions on Islamic law, said there are several alternatives to touching the bodies of Covid-19 victims. In a “worst case scenario,” the council said, Muslim leaders should adopt a different method of cleansing, using sand instead of water and not opening the body bag.

Others, such as Ahmed in Queens, consider Covid-19 victims martyrs, following the Prophet Muhammad’s teaching about believers who die in plagues.

“We believe that God forgives you for whatever you are not able to do,” said Yasir Qadhi, dean of academic affairs at the Islamic Seminary of America in Dallas and a member of the council of scholars. “If the government is asking you not to wash deceased bodies, as psychologically painful as that might be, it will not affect the deceased.”

Still, many Muslims feel guilty for not being able to provide full Islamic burials, said Dr. Edmund Tori, a medical doctor and president of the Islamic Society of Baltimore.

“When you modify the prayer, you are messing with something that is very, very dear to people,” said Tori, who said his society spent several months educating the community about changes to religious practices because of Covid-19.

Muslim funeral homes and mosques have tried to accommodate mourners by holding the prayers outdoors, in parking lots or other open spaces hospitable to social distancing.

But the desire and obligation to attend the prayers are so great, Tori said, that the Islamic Society of Baltimore has stopped sending funeral notifications — or sends them only to a small group of people close to the deceased.

When the architect of the Islamic Societies campus died of Covid-19, Tori said, leaders kept the news quiet, leading to some upset feelings.

“Let’s just say people were not happy,” said Tori. “Everyone wanted to be there. It took a lot for the community not to come.”

This group provides ‘midwives for the soul’

Zinner, the president of the national group for Chevra Kadishas, said the risks are too high for Jewish burial societies to perform the ritual purifications in person.

The live people in the room, not the deceased body, pose the greater danger, he said. Taharahs are often performed in small rooms, with people working and singing in close proximity.

“We have to recognize that the risk is high,” Zinner said, “and we have to wait until it’s reduced.”

Instead, Zinner recommends “spiritual taharas” like the virtual service in Pennsylvania.

But the Chevra Kadisha of Greater Washington, near the nation’s capital, is continuing to conduct in-person purification rituals, said Devorah Grayson, leader of the women’s section. (Women wash and dress women; men do the same for men.)

Grayson said her society has consulted with the National Institutes of Health and CDC and volunteers wear masks, face shields, two gowns and pairs of gloves, rain boots and disposable shoe coverings. Still, 35-45% of the society’s volunteers will not perform the ritual in person.

Grayson compared participating in the ritual to going grocery shopping in the pandemic.

“The first time I did it,” she said, “it was terrifying.”

But Grayson, who belongs to the Orthodox strand of Judaism, said she feels a holy obligation to help Jews on the threshold between this world and the next. One name for burial society volunteers is “midwives for the soul.”

When souls meet God, Grayson said, they should be dressed with dignity — pandemic or not.

And so, the volunteers will continue to perform the rituals. They have survived plagues before.

When the body is properly prepared, Grayson will help place it in the coffin, adding a little soil from Israel, and softly close the lid. The midwife’s job is over, and now the soul’s must begin.