Dying of laughter is an exaggeration, but something about it has rung true over the centuries. 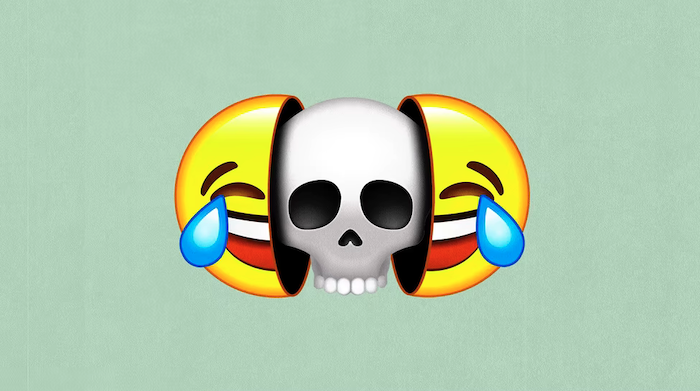 On a literal level, it should be impossible to make sense of someone saying “I’m dead” unless you’re attending a successful séance. Yet here we are in 2022, not only proclaiming our own expiration but reveling in it. Far from speech beyond the grave, “I’m dead” has come to communicate one of the highest pleasures of life: the giddy throes of uncontrollable laughter. When someone says “I’m dead” or even just “dead” in 2022, they’re telling you that they couldn’t be more tickled by what just happened. So how did being dead become a good thing?

Death and laughter have been strange bedfellows since ancient Greece, where, legend has it, the fifth-century-B.C. painter Zeuxis died from laughing at the portrait he was painting of a supposedly ugly old woman—a hilarious anecdote later immortalized in an equally hilarious painting by the Dutch master Arent De Gelder. And Zeuxis’s isn’t the only classically depicted death by laughter. The Stoic philosopher Chrysippus, by several accounts, kicked the bucket because he couldn’t stop laughing after witnessing a donkey eating his figs. Bizarrely, King Martin I of Aragon is said to have died laughing at a joke also concerning an animal eating figs. Legends of giggly demises litter history; as recently as 1989, a Danish audiologist is said to have passed away guffawing during a screening of A Fish Called Wanda. Apparently, the best medicine is also sometimes the sweetest poison. Although I admit it would be a great way to go, I myself will be avoiding all zoo-adjacent fig farms in the near future out of an abundance of caution.

The connection between death and laughter was consummated in English by—who else?—Shakespeare. In his comedy The Taming of the Shrew, after the exit of the vivacious and eccentric couple Petruchio and Katharine, Petruchio’s servant, Grumio, says, “Went they not quickly, I should die with laughing.” From then on, the phrase to die laughing was part of the language as a hyperbolic idiom—we all know it’s an exaggeration, but something within the fiction rings true to our relationship with laughter and death. The fatal violence of hilarity proliferated in English over the following centuries. From the 1930s slang to bust a gut to the idea of being “in stitches” to the ironic Catcher in the Rye Holden Caulfield–ism “That killed me,” there’s something about the experience of uncontrollable laughing that seems to put us into close contact with our inevitable nonexistence.

And it makes sense. Intense laughter expresses itself in violent convulsions and temporary loss of bodily control. Who among us hasn’t been part of a tickle-fest that verged on sadomasochistic brutality? Times when I laugh so hard that I cry can feel like an out-of-body experience—a sublime mania that temporarily relieves me of the burden of consciousness. Perhaps we say “I’m dead” because we’ve intuited that deep and frenzied laughter gives us a taste of the eternal unknown toward which we’re all always hurdling. This sense of comatose comicality yielded our Friday-level clue “That’s so funny I can’t even function.”