It’s time to reevaluate the cost of death care—and its environmental impact. 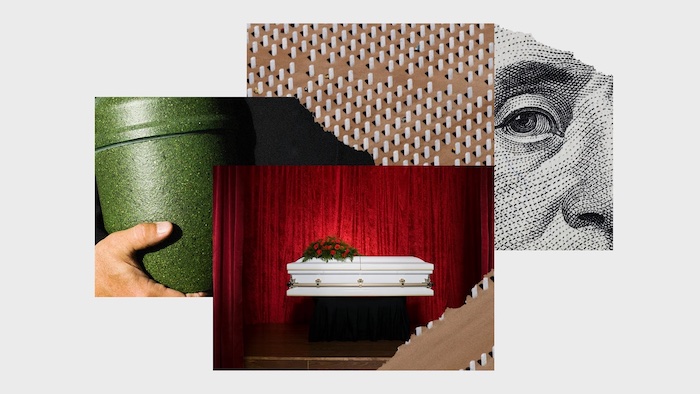 “You can’t die these days because it’s too expensive,” Randy Hinojosa told Time last year. Hinojosa had just paid $15,000 for a funeral for his wife of 26 years, after she died of the coronavirus. Like thousands of families coping with unexpected pandemic funeral costs, he drained his savings and launched a crowdfunding campaign to recoup some of the losses. “I didn’t even want to ask anybody for money,” Hinojosa said, crying. “I had this pride that I could do this.”

The pandemic, which has killed 690,000 Americans and counting, has magnified the importance of swift, respectful disposition of the dead—and the untenable cost of doing business in the current system. In 2019, the average funeral cost $9,135, according to the National Funeral Directors Association. That included viewing and burial, but not dwindling cemetery space or big-ticket items like monuments and other grave markers. Even cremation, for decades promoted as a cheaper (and greener) alternative to burial, now averages $6,645.

These practices are not just financially devastating, they’re also environmentally calamitous. In addition to human remains, traditional burial puts an estimated 1.6 million tons of reinforced concrete and 800,000 gallons of formaldehyde—a chemical used in embalming and a probable carcinogen—into the earth each year. Cremation, meanwhile, generates an estimated 534.6 pounds of carbon dioxide per person—more than the per capita emissions of Afghanistan.

These harsh end-of-life economics have contributed to a crisis of funeral poverty in the US, says Victoria J. Haneman, a professor at Creighton University School of Law in Nebraska. Funeral poverty existed long before the pandemic and, without significant reform to both the funeral industry and to national and local systems of funeral aid, many families will continue to struggle with growing credit card debt and new personal loans amidst their crushing grief.

In the worst-case scenario, people will be forced to leave their loved ones unclaimed in county custody, where sheriffs, medical examiners, social workers, chaplains, and others will cremate or bury the remains. In the US, as many as 3 percent of bodies are left unclaimed each year, a number that has reportedly risen due to economic inequality, the opioid epidemic, and the pandemic.

Though the US has the resources to guarantee everyone a proper burial, they’re not evenly distributed. “We should not be normalizing the $9,000 as the average cost of a funeral,” Haneman says. “Not only is that staggering, it’s wholly unnecessary.”

For most of American history, people died at home, where they were tended to by loved ones. Women in the community prepared the body, while men made the casket. That started to change with the Civil War, where death occurred on faraway battlefields. Enterprising morticians subsequently popularized embalming, a preservation technique that allowed families to ship bodies long distances so those who died could be buried where they had lived.

Today, death is a $20 billion industry. (That’s similar to the total revenue for the global music business in 2019, or the market for meat substitutes.) In its most corporate and cynical forms, it’s marked by largely unchecked pricing, including markups as high as 500 percent on caskets. It’s also defined by decades of resistance to innovation, even as public attitudes toward death are shifting. In 2015, for example, one funeral conglomerate estimated that for every 1 percent of its customers who chose cremation the company lost about $10 million—a “problem” some morticians attempt to solve by selling families often-unnecessary services and products, from pre-cremation embalming to pricy urns.

Where many communities were once served by small mom-and-pop funeral shops, the death-care landscape has been transformed by shareholder-driven companies. Service Corporation International is the largest funeral services provider in North America, with over 1,500 funeral homes and 500 cemeteries in its portfolio, accounting for roughly 16 percent of the overall market share. Instead of lowering prices as it has scaled, SCI prices average 47 to 72 percent higher than those of its competitors, according to a 2017 report coauthored by the Funeral Consumers Alliance. The only people who don’t seem to mind are investors, whose stock is up 151 percent over five years. Thanks to the efforts of Big Funeral, the industry holds a monopoly on the afterlife—and it’s pricing people out of dying.

But reining in these profit-driven companies has proven difficult, as their practices are often supported by local statutes. For example, two-thirds of states have onerous “ready to embalm” laws that require funeral directors to have access to an embalming room, even if they don’t want to offer the service or families don’t request it. These regulations persist despite the fact that embalming isn’t necessary in the case of cremation, which half of Americans now choose, and that green burial grounds—an increasingly popular choice among the eco-conscious—typically forbid the practice in order to prevent contamination of the soil. In New York State, the cost to maintain such facilities is passed on to consumers (in the form of higher funeral prices) to the tune of $25.8 million annually.

To date, the best efforts to curb these practices have come from the funeral consumers’ movement, spurred on by muckraker Jessica Mitford’s 1963 book The American Way of Death, which found evidence of widespread predatory pricing and disinformation in the industry. In the 1970s, the Federal Trade Commissions instituted its Funeral Rule, which requires that funeral service providers offer prospective customers accurate, itemized prices. Yet in 2020, the agency’s own undercover investigators found that roughly 19 percent of funeral homes they visited in five states failed to disclose adequate pricing information.

Part of the problem is that many people feel that the sticker price of a solid mahogany coffin or a ceramic urn reflects their love and respect for the dead. And even if they wanted to find a cheaper alternative, with so many Americans unable or unwilling to plan for their death, families are often left to organize and finance funerals under duress. It’s no wonder the majority of them will use the first funeral home they contact, without conducting a price comparison.

While business as usual remains clearly exploitative, it’s hard for many Americans to envision an alternative. But death care doesn’t have to be so commercialized, says Joshua Slocum, executive director of the Funeral Consumers Alliance. “That is not a natural law.”

Today, the federal government, as well as many state and local agencies, provides some assistance to families who might otherwise struggle to bury their kin. But these funds are not always accessible, and reimbursement is typically meager. In 2020, for example, the Social Security Administration set the cap on funeral grants to $255 a person—and it issues aid only to select heirs.

That’s what made the Federal Emergency Management Agency’s decision to reimburse the families of people in the US killed by Covid-19 up to $9,000 for funeral costs so unprecedented. While FEMA has provided burial assistance in the wake of natural disasters before, the pandemic relief effort is of a different magnitude. As of September, FEMA has awarded over $1 billion to more than 165,000 people.

FEMA’s remarkable support should have been a model for federal funeral assistance, with or without disaster, for decades to come. But by doling out aid without any attempts at environmental, economic, or other reform of the funeral industry, the program effectively subsidized it. “We had this fantastic opportunity to use this moment to not only pay for death care but to also promote environmental initiatives and innovative death technology,” Haneman says. We failed.

Even so, the pandemic has encouraged many people to reconceive death care as the end point on the continuum of health care, says Philip Olson, a technology ethicist at Virginia Tech who studies death. Funeral directors are now seen as #LastResponders who pick up where doctors left off. In an ideal world, both kinds of care would be universally accessible and focused on quality, not profit.

In 2016, Olson ran for the board of directors of the Funeral Consumers Alliance. He made government-funded death care his platform, but the idea of a socialized system was one few in the organization were willing to broach. Some consumer advocates worry that universal death care will inevitably benefit the funeral industry, whose worst practices they aim to curb. (“Big warning flags go up in my head when I hear ‘subsidy,’” Slocum told me, adding, “is that charity for the family, or a subsidized profit to the funeral home?”) But Olson still believes that funeral costs could and should be covered, perhaps through a future expansion of Medicare, a federal health insurance program primarily for Americans 65 and older.

Medicare is funded by several sources, most notably the payroll taxes of those currently in the workforce. That money is used to cover hospital, skilled nursing, and hospital services for enrollees, as well as some outpatient services and prescription drugs. Olson says taxpayer dollars could be distributed to ensure minimum coverage for funeral expenses, too. If health is a human right, as the World Health Organization claims, the dignified treatment of human remains should be, too. In the end, Thanatos comes for us all.

There’s some international precedent for such a system: In Sweden, every resident is guaranteed a funeral service and burial or cremation. In 1990, the government instituted a burial tax calibrated to the area in which someone lives (and presumably dies and is buried), as well as their income level.

When a Swede dies, their family automatically receives space for storing and viewing the body, a ceremony hall free from religious symbols, a grave or equivalent in a public cemetery for 25 years, coverage for the cost of burial or cremation, and some limited transportation. Other items, such as a coffin or urn, tombstone, funeral officiant, decorations, and reception, are not included. Nonetheless, the average cost of a funeral in Sweden in 2014 was just $2,897.

Right now, the Biden administration is advancing a law that, if passed, would allow Medicare to negotiate prescription drug prices. In the same way, universal death care coverage could negotiate the cost of coffin prices and other funeral services and supplies. While not everything could (or should) be covered, the essentials would be guaranteed to everyone. The government could also make it a point to incentivize green death care options, including natural burial, aquamation, human composting, and mushroom suits. In the process, Olson says it could lead to a sizable shift in power by challenging the primacy of what he calls “funeral industrialists” (funeral directors, cremationists, cemetery managers, and others) and biomedical experts, and raising up advocates of alternative approaches like home funerals, DIY caskets, and more.

“There are other ways of thinking about ourselves, not just as funeral consumers,” Olson says, “but as mourners, grievers, as members of a society in which the management of the dead is a social necessity.”