[T]here is life and death and the in-between.

It is the in-between where hospital volunteers such as Edie Bennett and David Wynn make sure that no one dies alone.

Over nearly a decade of volunteering at St. Joseph Hospital of Orange, Bennett and Wynn have comforted people going gently into the night, endured sepsis many would run away from, even witnessed people crossing death’s door and suddenly reviving.

But perhaps there is nothing Bennett and Wynn say that is more comforting than hearing when someone is unresponsive humans connect on far deeper levels than you might expect.

Family and friends gathering with someone near death is as old as humanity. But in the modern world, there is a raft of reasons dying patients face death alone.

Some have families too far away to arrive in time, some are homeless and without support, others are estranged from loved ones, some simply outlive everyone they know.

The No One Dies Alone movement traces its roots to a rainy Oregon night in 1986.

Sandra Clarke, a nurse at Sacred Heart Medical Center in Eugene, tended to an elderly dying man who asked, “Would you stay with me?’

Clarke was especially busy with six patients, according to reports, and promised she would soon be back. But by the time she returned, the man had passed on.

For years, the incident haunted Clarke. Eventually, she discussed with staff her idea of volunteers staying with dying patients. PeaceHealth, the corporate organization of Sacred Heart Medical Center, approved her vision and in 2001 No One Dies Alone was born.

Today, an estimated 200 hospitals are involved.

Wynn first thought about dying alone when he and his family happened to be in Las Vegas and a family member died while they were there. Later, he heard about No One Dies Alone through a hospital newsletter after being treated for a condition that nearly killed him. He recalled dark, sometimes scary nights when staff held his hand and comforted his worries away. “It was like I got hit on the head with a board.

“I don’t want to sound like ‘St. Dave,’ but I wanted to do something that made a difference.”

Busy with family, camping, skiing and a demanding job as an AT&T senior project manager, Wynn offered to volunteer. Soon, he was coaxed into coordinating the program.

That was nearly a decade ago. 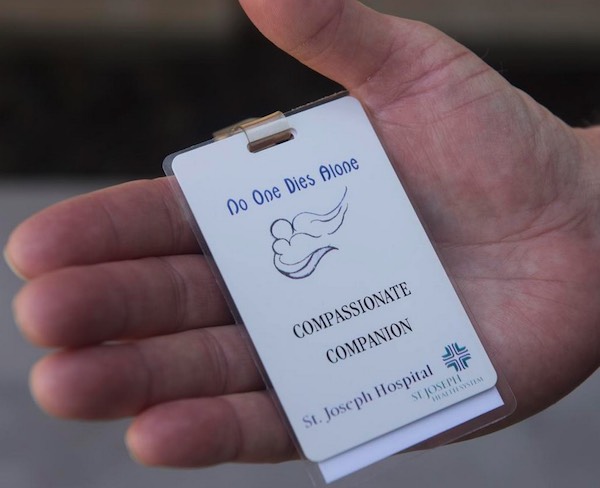 St. Joe’s, as the hospital is affectionately known, averages one dying alone incident a month. That may not sound like much, but keep in mind that death is unpredictable. Some people pass within a few hours, others linger for weeks — and some walk away.

Wynn recalls a woman dying one New Year’s Eve. On his way home from a ski trip with his wife, he agreed to answer the call thinking he would be home from the hospital before midnight.

But midnight stretched to 1 a.m., then 2 a.m., then 3 a.m. Dozing in a chair, Wynn woke to daylight and the woman sat bolt upright in bed asking, “Who are you?”

Wynn stammered he was simply there to keep her company.

Soon, the woman returned to her nursing home.

When a call goes out, an army of some 45 volunteers split into four-hour, round-the-clock shifts.

Wynn recalls his first patient, a woman in isolation dying of cancer. When he opened her door, the odor nearly knocked him over. He gathered himself, sat down, took a glove off and touched the woman’s arm to assure her that she was not alone.

“It’s not always pleasant. Sitting there for hours with a gown and mask on can be difficult,” Wynn, a 61-year-old Anaheim Hills resident, allows, “but every human being deserves to die with dignity.

“I think touch is very important.”

As Wynn talks, I think of my father holding my mother’s hand and caressing her arm just before Thanksgiving as she lay in a coma. As her heartbeat slowed, I too held her hand and gently kissed her forehead.

But I wondered whether we do these things to sooth our souls or for the souls of others.

Wynn is convinced communication — both sound and kinetic — goes back and forth regardless of the patient’s responsiveness.

“When I was non-responsive,” he says of his time as a patient, “I could still think, I was still aware.”

Volunteers talk, watch TV, listen to music with patients. “Each case,” Wynn explains, “takes on a life of their own. There’s a connection.”

Wynn learned one of his patients was a musician so Wynn played classical music. But the patient grew restless so Wynn turned off the music. Later, he learned the man was a jazz musician and Wynn played something off a 1959 Miles Davis album called “Kind of Blue.”

The patient’s lips crinkled into a slight smile.

When Bennett learned her father was in the hospital in Arizona, the retired lobbyist drove eight straight hours. But she just missed being there when dad was still alive.

The event prompted the 68-year-old Orange resident to volunteer. “You’re sharing the last stage of life’s journey,” Bennett offers. “For me there’s no more sacred an encounter.”

Both Bennett and Wynn remember every patient as if it were yesterday. One was a 26-year-old woman with a long-term disease Bennett had met at St. Joe’s the year before. Back then, the woman had a tattered stuffed animal. Bennett brought a playmate, a furry toy.

“She was sipping from a straw,” Bennett recalls, “lime Jell-O. I stroked her hair. She could have been my daughter.”

Bennett looked at the young woman and promised, “You will always be my angel.”

“Thank you,” the young woman said before slipping away.

“I still think of her,” Bennett allows, “and that was almost two years ago.”

Then there was the time when Bennett was with a dying woman gasping for air. Her breathing slowed to six breaths a minute. Soon, it was so quiet it appeared she was about to take her final breath.

Suddenly, the patient muttered something. Bennett couldn’t make it out. Another sound, “water.”

Within an hour, the patient sang, “Water, water.” Then she ate chocolate pudding. Soon, she was discharged.

The mystery of the in-between.