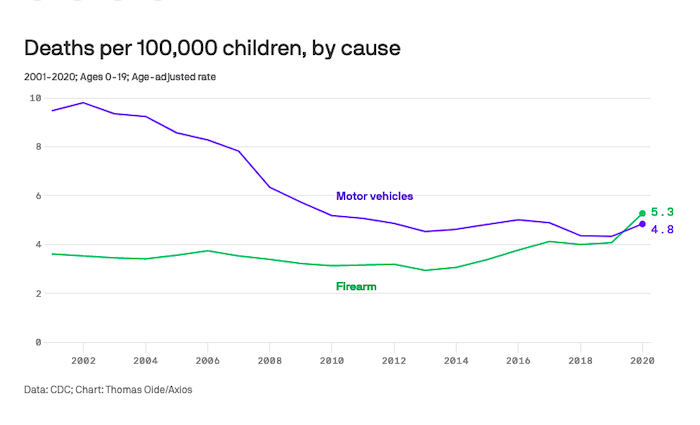 Firearms were the leading cause of death for kids one and older for the first time in 2020, the most recent year for which CDC data is available.

Why it matters: The firearm death rate among children is steadily rising, as more kids are involved in gun-related homicides like Tuesday’s mass shooting in Uvalde, Texas, as well as suicides and accidents.

By the numbers: Nearly two-thirds of the 4,368 U.S. children up to age 19 who were killed by guns in 2020 were homicide victims, per the CDC. Motor vehicle crashes, formerly the leading cause of death for kids one and older, killed nearly 4,000 children. 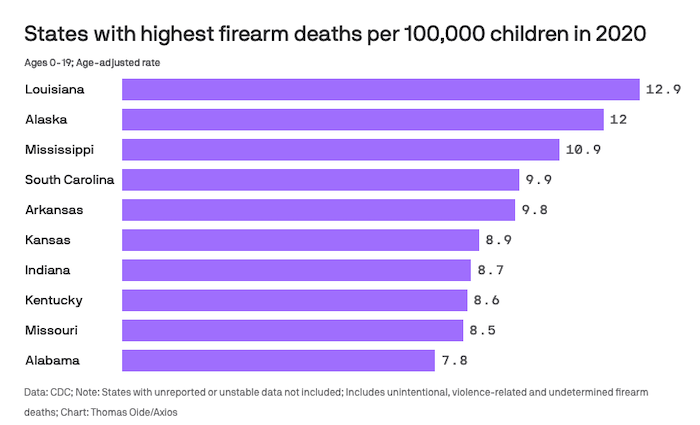 Of note: Among children younger than 1, congenital anomalies — or birth defects — were the leading cause of death in 2020, resulting in 4,043 fatalities, per the CDC.

What they’re saying: “As the progress made in reducing deaths from motor vehicle crashes shows, we don’t have to accept the high rate of firearm-related deaths among U.S. children and adolescents,” researchers recently wrote in a New England Journal of Medicine article that highlighted the trend.

The bottom line: School shootings have become tragically common in the U.S., but constitute only a small fraction of gun deaths among children.