Holding a Dying Mother’s Hand With a Latex Glove 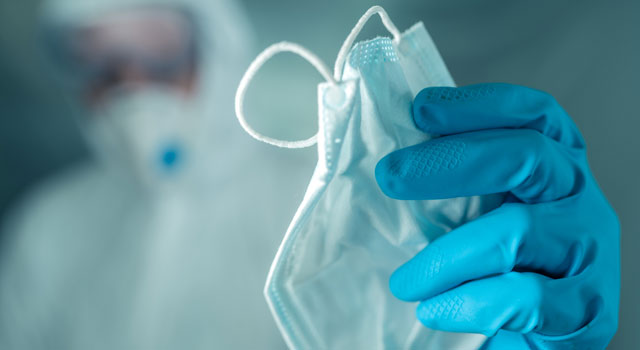 by Deborah Bloom and Nathan Layne

Doug Briggs put on a surgical gown, blue gloves and a powered respirator with a hood. He headed into the hospital room to see his mother – to tell her goodbye.

Briggs took his phone, sealed in a Ziplock bag, into the hospital room and cued up his mother’s favorite songs. He put it next to her ear and noticed her wiggle, ever so slightly, to the music.

“She knew I was there,” Briggs recalled, smiling.

Between songs by Barbara Streisand and the Beatles, Briggs conference-called his aunts to let them speak to their sister one last time. “I love you, and I’m sorry I’m not there with you. I hope the medicine they’re giving you is making you more comfortable,” said Meri Dreyfuss, one of her sisters.

Somewhere between “Stand by Me” and “Here, There, and Everywhere,” Barbara Dreyfuss passed away – her hand in her son’s, clad in latex. It would be two days before doctors confirmed that she had succumbed to COVID-19, the disease caused by the coronavirus.

Dreyfuss, 75, was the eighth U.S. patient to die in a pandemic that has now killed more than 1,200 nationally and nearly 25,000 worldwide. She was among three dozen deaths linked to the Life Care nursing home in Kirkland, Washington, the site of one of the first and deadliest U.S. outbreaks. (For interactive graphics tracking coronavirus in the United States and worldwide, click https://tmsnrt.rs/2Uj9ry0 and https://tmsnrt.rs/3akNaFr )

Dreyfuss’s final hours illustrate the heartrending choices now facing families who are forced to strike a balance between staying safe and comforting their sick or dying loved ones. Some have been cut off from all contact with parents or spouses who die in isolation, while others have strained to provide comfort or to say their final goodbyes through windows or over the phone.

Just three days before his mother died, Briggs had been making weekend plans with her. Now, in his grief, he found himself glued to news reports and frustrated by the mixed messages and slow response from local, state and federal officials.

“You find out all these things, of what they knew when,” Briggs said.

Officials from Life Care Centers of America have said the facility responded the best it could to one of the worst crises ever to hit an eldercare facility, with many staffers stretched to the brink as others were sidelined with symptoms of the virus. As the first U.S. site hit with a major outbreak, the center had few protocols for a response and little help from the outside amid national shortages of test kits and other supplies.

‘NOT FEELING TOO GOOD’

A flower child of the 1960’s, Dreyfuss lived a life characterized by art and activism. After marrying her high school sweetheart and giving birth to their son, she pursued a degree in women’s studies at Cal State Long Beach, where she marched for women’s equality and abortion rights.

Furious over President Gerald Ford’s pardoning of former president Richard Nixon in 1974, Dreyfuss took to her typewriter and penned an angry letter to Ford. “Today is my son’s 9th birthday,” she wrote of a young Briggs. “I do not feel like celebrating.”

By the time she arrived at the Life Care Center in May 2019, years of health issues had dimmed some of that spark, her son said. Fibromyalgia and plantar fasciitis restricted her to a walker or a wheelchair, and chronic obstructive pulmonary disease required her to have a constant flow of oxygen.

When her son visited on Feb. 25, he brought a grocery bag of her favorites, including diet A&W root beer. She awoke from a nap and smiled at him, but hinted at her discomfort.

Still, Dreyfuss talked about an upcoming visit with her sisters – the movies she wanted to see, the restaurants she wanted to try. The mother and son then had only a vague awareness of the deadly virus then ravaging China.

In hindsight, Briggs realized he had witnessed the first signs of her distress. His mother was using more oxygen than usual, her breathing was more strained.

At the time, staff at the nursing home believed they were handling a flu outbreak and were unaware the coronavirus had started to take hold, a spokesman has said.

Two days later, Briggs dropped by to see his mom. She felt congested, and staff were going to X-ray her lungs for fluid. Briggs, 54, still saw no red flags, and continued to discuss weekend plans with his mother.

“I hope we can finally watch that new Mr. Rogers movie,” she told him, referring to the film, A Beautiful Day in the Neighborhood.

Briggs hugged his mom before she was wheeled to the imaging room and drove for a quick meal. Soon after, he received a call from the nursing home. His mother was experiencing respiratory failure. She was on her way to the hospital. Doug rushed to nearby EvergreenHealth Medical Center. By then, she was unresponsive.

After hearing of her sister’s sudden hospitalization, Meri Dreyfuss remembered an earlier voicemail from Barbara: her distant voice, groaning for 30 seconds. When she had first heard it, she assumed Dreyfuss had called by accident, but now she realized her sister was in pain. “It haunts me that I didn’t pick up the phone,” she said.

Briggs spent close to 10 hours the next day in his mom’s hospital room. He wore a medical mask and anxiously watched her vital signs – especially the line tracking her oxygen saturation.

On his way out the door, a doctor took him aside to say they were testing her for the coronavirus. He remembered the difficulty reconciling the outbreak taking place on television – far away, in China – with what was happening in his mother’s hospital room.

In the Bay Area, Meri and Hillary Dreyfuss were packing their suitcases on Feb. 28 when Briggs telephoned. After the call, they decided that visiting their sister would pose too much danger of infection.

“I realized there was no way we were going to get on a plane at that point, because we couldn’t see her,” said the middle sister, Hillary. “And now, it seemed that we shouldn’t be seeing Doug, either.”

They canceled their flights. On Saturday, Feb. 29, Briggs learned his mother’s condition was deteriorating. Tough decisions loomed. Briggs and his aunts decided to prioritize making her comfortable over keeping her alive. Doctors gave her morphine to relax the heaviness in her lungs.

She died the next day.

Having emerged from a two-week quarantine, Briggs will soon retrieve his mother’s cremated remains. The family has been struggling with how to memorialize her life in such chaotic times.

“All the things that one would want to happen in the normal mourning process have been subsumed by this larger crisis,” said Hillary Dreyfuss. “It’s almost as though her death has become a tiny footnote in what’s going on.”